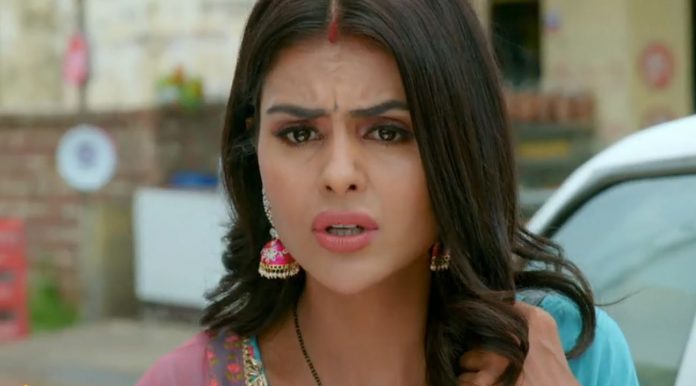 Udaariyaan 2nd August 2021 Written Update Alert for Tejo Fateh feels disgusted that Jasmin has stained a person’s character just for her selfish reasons. He didn’t know that she can stoop so low for her motives to get fulfilled. Jasmin wanted to break her alliance with Gippy. She does it her way, by accusing Gippy for his affair with Sweety. She also accuses Gippy for hitting her. Fateh wanted to know Jasmin’s plan beforehand, but she keeps it to herself.

She doesn’t let Fateh get aware, knowing he will not support her. Fateh is really disappointed to see Gippy accused for cheating Jasmin, when Gippy has been always loyal to her. Gippy has always supported her and also let her enjoy her life freely, being an open-minded guy. Jasmin takes an advantage of his goodness and targets him. Gippy fails to prove that his character is clean, he isn’t interested in Sweety or anyone else, when he wanted to marry Jasmin.

Jasmin sheds crocodile tears to fool the family about Gippy and gets the marriage cancelled just in time, when the family was preparing to begin the pre-marriage functions. Fateh really gets disheartened seeing the way Jasmin was hurt Gippy and maligned his character in front of the entire family. When Jasmin meets him and passes romantic remarks to woo him, he makes her away from him. He tells her that she has done too wrong with Gippy to spoil his image and malign his character.

He knows what a character means for a decent guy, its a big humiliation if an innocent person is accused of an affair. He tells Jasmin that he didn’t know that she is going to plan something worse like that. He tells her that she will realize her mistake soon. He doesn’t want to talk to her or listen to her plans. He feels scared that Jasmin will do the same thing with Tejo, she will accuse Tejo of something worse to break Tejo and his marriage. He can’t see Tejo suffering because of his love life.

Jasmin emotionally blackmails him to win him back. She tells him that she has done everything for his sake, because she is madly in love with him. She wants to see the same madness in Fateh, which he had in his heart for her before. She tells him that she wants her old Fateh back, who would accept her madness as well. Fateh gets troubled by her expectations. Meanwhile, Tejo has no idea about Jasmin’s plans with Fateh. She finds Swaroop meeting Gippy. Gippy exclaims his innocence to Swaroop, which she believes completely, knowing how mad Jasmin is. Tejo overhears their conversation.

Swaroop and Gippy understand that Jasmin is still in love with Fateh and playing these worst games for his sake. They want to alert Tejo and save her marriage from breaking. Tejo still cares only for Jasmin, and wonders why is Swaroop meeting Gippy when the marriage is called off. She doesn’t want Gippy to lie to Swaroop and get back into the family’s faith circle. Will Tejo learn the truth in time? Will Fateh realize that he isn’t doing anything less shameful than Jasmin by cheating Tejo? Who deserves Fateh, Tejo or Jasmin? Comment your views and keep reading.

Gippy wants Jasmin to tell her family that he doesn’t even know Sweety. He asks Tejo and family to believe him, but he gets slapped in return. He is shockingly humiliated and thrown out of the house. Jasmin gains sympathy from the family, and leaves them in tears. Fateh doesn’t like to see Gippy losing his reputation. Gippy wants a chance to explain, but the family calls off their relations at once. Gippy is heartbroken that Jasmin cheated him. Swaroop wants the family to know Jasmin’s drama.

Jasmin pretends to cry on her fate. The family supports Jasmin like never before and accuses Swaroop. Swaroop still attempts to open their eyes and show Jasmin’s truth. Satti and Rupy get blind towards their daughter. Fateh is hurt that he had seen everything and kept silent. He finds Tejo and Jasmin’s family crying for Jasmin. Tejo shows her faith on Fateh. She tells that he can never cheat her. He feels suffocated by her faith. He goes away from Tejo. Tejo doubts that he is thinking about Jasmin after Gippy’s incident.

Fateh is really too sad. Tejo cheers him once again by ending their distance. She understands his sorrow. She tells Fateh that a person can cheat before and after marriage, a girl can never tolerate a husband’s cheat. Fateh feels he is doing the same with Tejo. His conscience shakes up from the core. He feels too upset seeing her true love. She is grateful that he protected her from every wrong. Fateh is burdened by Tejo’s love expectations. He can’t make her away, or Jasmin away. Jasmin pretends to be too sorrowful in front of the family. She becomes a pitiful figure for the family.

Swaroop is aware that Jasmin will ruin Tejo’s marriage. Fateh and Jasmin decide to meet and discuss their plans. Tejo wants to meet Jasmin and family, but finds going to the academy with Fateh will be a better option to divert her mind. Jasmin fools the family to go and meet Fateh. Fateh lies to Tejo to get rid of her. He doesn’t take her along. Tejo blindly trusts him. She learns that the family is too sad. She goes to meet them. Jasmin boasts of her smartness. Swaroop reveals Jasmin’s truth to Gippy and apologizes to him. He feels he got saved from a wrong girl like her, who is wooing her own brother-in-law.

He decides to never forgive her. Jasmin proudly celebrates her plan’s success. Fateh rebukes her for hurting Gippy’s image. Swaroop asks Gippy to help her make a plan and expose Jasmin with a proof. She tells that they shall teach a lesson to Jasmin for the sake of Tejo. Gippy doesn’t know if he should trust Swaroop. Tejo sees them and suspects their plotting. Jasmin defends her evil. Fateh calls it totally wrong. Swaroop tells that she won’t allow Jasmin to ruin Tejo’s house. Swaroop and Gippy join hands against Jasmin. Shoot a comment below.

Reviewed Rating for Udaariyaan 2nd August 2021 Written Update Alert for Tejo: 1/5 This rating is solely based on the opinion of the writer. You may post your own take on the show in the comment section below.