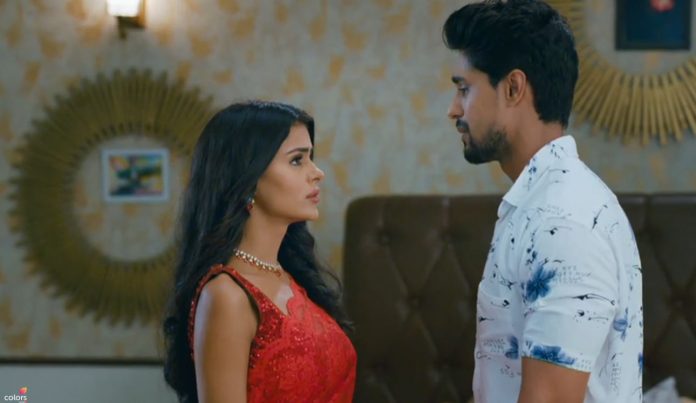 Udaariyaan 6th August 2021 Preview Update Swaroop ousted The entire family gets mad at Mami ji when she fails to prove Jasmin and Fateh’s ongoing affair. Satti goes to the extent of throwing out Swaroop from the house. She packs Swaroop’s bags and throws it out of the house, while dragging Swaroop by her arm to show the main gate. She asks Swaroop to stop spreading poison in their minds against Jasmin, who has lost Gippy’s alliance for Gippy’s mistake itself. They don’t think Jasmin is wrong.

Swaroop tells them that they will regret a lot, when Jasmin ruins Tejo’s marriage and marries Fateh. She tells them that Jasmin is after Tejo’s happiness. She warns Satti and Rupy till the last minute she stays in the house. Rupy also loses faith on Swaroop. He also asks Swaroop to stop maligning Jasmin’s name and just get out. Gippy and Swaroop get humiliated by the family, just because of Jasmin’s lies. They both warn the family that they will pay a big price for Jasmin’s indecent affair in the form of Tejo’s sorrow.

Satti and Rupy believe Jasmin and also Fateh. They don’t realize that both Jasmin and Fateh are cheating the family badly. On the other hand, Fateh still hides his feelings from Tejo. He just wishes to tell Tejo that he still loves Jasmin, but doesn’t get the courage to express himself. Fateh feels bad that he will have to leave Tejo for marrying Jasmin, but doesn’t have any control on his heart. What will happen when Tejo learns the harsh truth that breaks her heart? Keep reading and leave your comments below.

Reviewed Rating for Udaariyaan 6th August 2021 Preview Update Swaroop ousted: 3/5 This rating is solely based on the opinion of the writer. You may post your own take on the show in the comment section below.