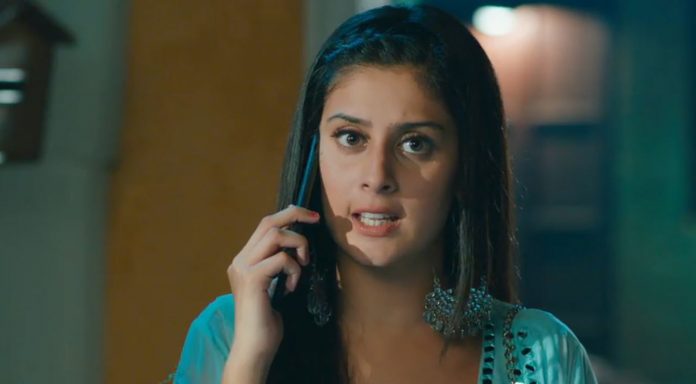 Udaariyaan 9th August 2021 Written Update Brash Jasmin Fateh gets upset that Jasmin didn’t spare his younger brother from her plans. He didn’t wish Amrik to get involved in Jasmin and his matter. He knows that Amrik wishes them to unite and often fought him while defending Jasmin, but he didn’t know that Jasmin will be dragging Amrik in the web of lies. Jasmin didn’t tell Fateh that she is going to come to the same restaurant to spoil his date with Tejo. She argues with Fateh for giving all his time to Tejo. She is insecure that he may go to Tejo forever.

Fateh has very well explained his selfish motive that he got Tejo on dinner just to end her suspicion on him. Fateh has fallen so low that he is cheating Tejo just because of Jasmin’s provocation. Fateh is glad that Tejo started believing him once again when he took her side in front of Jasmin on their dinner date. He wants Jasmin to understand that he is doing everything for their sake. Jasmin fails to reciprocate Fateh’s feelings right, and expects him to be just obeying her commands like a puppet.

She constantly reminds him the old vows and the madness of his love. He rebukes her for hurting Tejo’s heart by her inconsiderate attempts to show that she knows him better than Tejo. Jasmin tells him that its not her mistake if Tejo doesn’t know him well. He replies that she forgets about everyone else when she gets selfish and thinks just of herself.

She asks him if he is calling her selfish. She tells him that she is just doing this for his love. On the other hand, Nimmo finds Fateh’s date with Tejo, Jasmin and Amrik a weird one. She thinks Jasmin is targeting Amrik now, just to come back in Fateh’s life. She wants Fateh to really not go back to Jasmin, who ditched his love. She informs Gurpreet about Fateh’s dinner date. She tells that she has a breaking news, which she can’t disclose on the phone call. She adds that she is coming home to tell the entire matter to Gurpreet, leaving the latter tensed.

Fateh stays disturbed because of Jasmin. Tejo questions him about the dinner. She finds him dull. He tells her that she knows him really well, she doesn’t need to think of Jasmin’s words. She feels she doesn’t know him well, his likes and dislikes. He cheers her up by telling her that she knows him so well that even he doesn’t know about few things. She finds solace in his arms when she lies to sleep. She wants to talk to him until she gets a good sleep, but he gets disturbed by Jasmin.

He goes to speak to her by lying to Tejo about his work. Amrik drops Jasmin home and apologizes for Nimmo’s sake. Amrik cheers her up that she is feeling lonely after two broken alliances. Jasmin is thankful to him for being there. Amrik seems to develop feelings for her by her touchy gestures. Fateh is also troubled to know why Amrik got so friendly with Jasmin. Amrik tells Jasmin that they are friends, he is always free for her. Jasmin and Fateh catch up on the phone call.

Jasmin gets rude towards him when he rebukes her cheap act to come at the same place with his brother. He tells her that he can’t tell Tejo that they are going to punish her because of their love. He finds hard to explain their love to Tejo. She promises to find some way. She asks him to tell the truth to Tejo and help her move on. She adds that she feels raged when she finds him close to Tejo. He tells her that their families are also involved. She asks him not to call him selfish. Tejo reaches him, which leads him to hang up the call. She asks Fateh to just sleep, its too late. Fateh lies to Tejo once again.

Nimmo warns Gurpreet about the coming storm in their lives. Gurpreet can’t wait to talk to Nimmo. Jasmin goes mad thinking Fateh has gone back to Tejo. Tejo is happy after the lovely dinner date. She tells Mahi that she will be wearing clothes of Fateh’s choice. Nimmo meets Gurpreet and Tejo. She finds a change in the house, that Gurpreet is supporting Tejo. Nimmo tells Gurpreet that she is really innocent to fall in Tejo’s innocence. She tells that Jasmin is also having her sight on Amrik these days, she also wants to become Gurpreet’s bahu.

Gurpreet is disheartened to know this shocking news. Nimmo tells that if Jasmin gets married to Amrik and comes into the house, then Jasmin will ruin their happy family. She causes worries. Fateh and Tejo land into a lovey dovey moment. He gets disturbed by Jasmin once again. She asks him to prove his love to her. He doesn’t want her to fight all the time. She asks him if Tejo suspects them. He doesn’t want to talk about the dinner. She asks Fateh to meet her, else she will get protesting for her love.

She finds Fateh and Tejo’s romantic picture posted by Mahi. She angrily sends a text to Fateh. Fateh gets her message. He finds it hard to handle her. Tejo revisits her memories of that night. She tells Mahi that she isn’t beautiful like Jasmin, she doesn’t know if Fateh finds her pretty. Mahi tells her that Fateh was seeing her with much love, he really finds her beautiful. Jasmin wants an answer from him for his romance with Tejo. Mahi asks Tejo to accept the truth that Jasmin is just Fateh’s past.

Reviewed Rating for Udaariyaan 9th August 2021 Written Update Brash Jasmin: 2/5 This rating is solely based on the opinion of the writer. You may post your own take on the show in the comment section below.