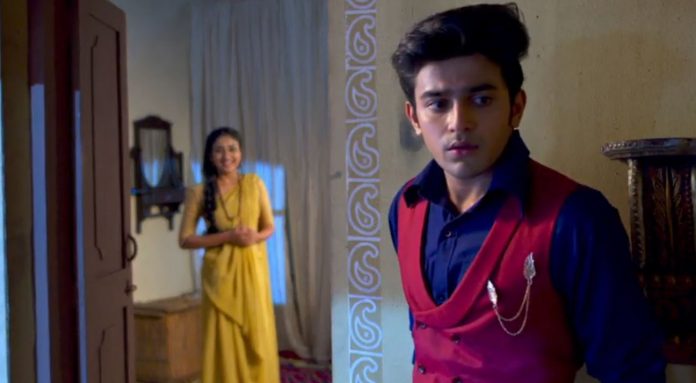 Barrister Babu 11th August 2021 Marriage twist written update upcoming Its a big moment for Anirudh to confess his love for Bondita. Both Anirudh and Bondita’s love is undying. Trilochan ignores the fact that Bondita was once his bahu. He decides the severe punishment for her to turn her mute for her entire life. Nevertheless, the painful moment will work in Bondita’s favor, when it breaks Anirudh’s silence and makes him speak up for Bondita. Anirudh will be seen taking a stand for Bondita, whose protector he had been since her childhood.

Chandrachur disguises himself as a servant to enter Tulsipur, knowing anyone who identifies him will hold a grudge and may hurt him. He gets the car to take along Bondita and escape as soon as possible. He sees Bondita in the mirror. Anirudh sees him and identifies him and doesn’t react. He realizes that Krishnanagar family is trying to save Bondita. He wants to help Chandrachur in a way that eases him to take away Bondita with him. He asks the worker to burn the garbage.

Chandrachur decides to take Bondita away by taking an advantage of the smoke. He holds Bondita and takes her to the car, where she questions his identity. Chandrachur shows his face to her, asking her to come along to their home. He adds that he had come all the way just to take her, because he can’t let her become a Sanyasi. Anirudh wishes that Bondita leaves with Chandrachur, since that’s the only way that she will get saved. Bondita refuses to go with Chandrachur, awaiting Anirudh to speak up his love in front of the entire village.

Anirudh doesn’t let Bondita lose her voice, which makes her special. Anirudh stops Bondita’s Sanyasi rituals. When he is asked about his relation with her, Anirudh confesses that he loves her. In order to save her from another bad customs, Anirudh marries Bondita. Bondita looks forward to end the enmity between the families with the marriage twist. How excited are you for Bondita and Anirudh’s remarriage twist? Leave your comments and keep reading for further updates.

Ghum Hai Kisi Ke Pyaar Mein:
Virat tells Sai about Samrat, who ended his life after knowing that he lost his life. He doesn’t know that Samrat is back. Virat plans to confess love to Sai. Sai feels she has come between two lovers. She knows that they have no future together. She doesn’t want to celebrate their marriage’s first anniversary knowing she has to leave Virat one day. Virat learns that Samrat is alive. He wants to meet Samrat and confirm if he is really Samrat or not.

Qurbaan Hua:
Neel and Chahat also take their vows when a couple marries in front of them. Chahat’s life falls in big dance. Neel prays for her life. Chahat battles for her life. Neel is hopeful that she survives. Doctor apologizes to Neel by giving a bad news, that he couldn’t save Chahat’s life. Will Neel’s true love bring her back to lie?

Hamariwali Good News:
Shilpa plays a drama in front of Meera. She tells that Mukund isn’t accepting her as Renuka, its better than she divorces him to let him live happily with Meera. She intentionally says this to hint Meera to divorce Mukund. Shilpa is also helpless to follow Sumitra’s orders. She doesn’t want to break a happy family, but Sumitra threatens her life. Meera decides to divorce Mukund. She leaves the house. The entire family looks for her. Mukund learns that Meera is missing.

Reviewed Rating for Barrister Babu 11th August 2021 Marriage twist Update: 4/5 This rating is solely based on the opinion of the writer. You may post your own take on the show in the comment section below.