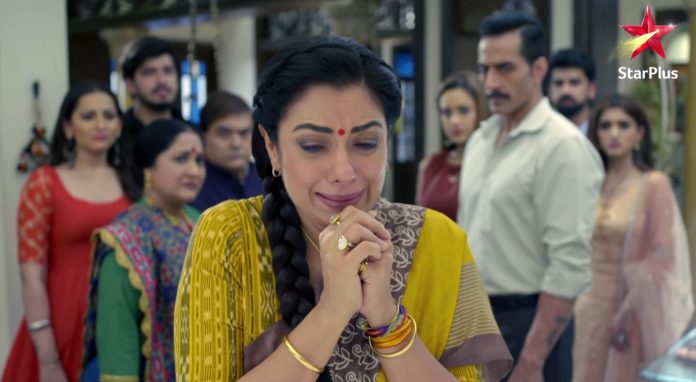 Anupama 25th August 2021 Update Anupama Rakhi’s deal Anupama gets shattered when the family blames her for the wrong decision taken for the loan repayment. She didn’t know that the family will lose their house. Vanraj gets worried that the Shah family will come on roads. Anupama wants the family’s support. She cries that she had put the family into such a big mess. She gets an idea to repay the loan amount. She recalls Rakhi, who could help her. She wants to take Rakhi’s help and save her family from the difficult times.

Rakhi can’t believe that Anupama has finally come to beg her. Anupama asks her for the money. Rakhi tells her that she is ready to give her 40 lakhs instead the needed 20 lakhs amount. She asks Anupama what will she get in return for the help. She accepts Anupama’s request and tells that she will rescue the Shah family from getting homeless, but she has a condition for it. Anupama tells that she is ready to do anything for the family’s sake.

Rakhi asks her not to worry then. She tells that she will instantly transfer the money to Anupama or Vanraj’s account. Anupama stops her from making the transfer. She asks Rakhi the price for her favor. She tells that she can give anything that she already holds in her rights.

She wants to know what is Rakhi wanting from her. Rakhi keeps a big condition for the deal. She asks Anupama if she accepts the deal. Anupama is shell-shocked by Rakhi’s demand. She accepts the deal to save the family. She doesn’t ask anyone or seek anyone’s consent for the deal. Anupama leaves the family disappointed once again. The family learns Anupama’s big mistake that would snatch their leftover respect as well. Everybody reprimands her for the mistake. What price will Anupama pay for her mistake? Keep reading. Catch up the Maha Saptah Promo below.

Reviewed Rating for Anupama 25th August 2021 Update Anupama Rakhi’s deal: 3/5 This rating is solely based on the opinion of the writer. You may post your own take on the show in the comment section below.