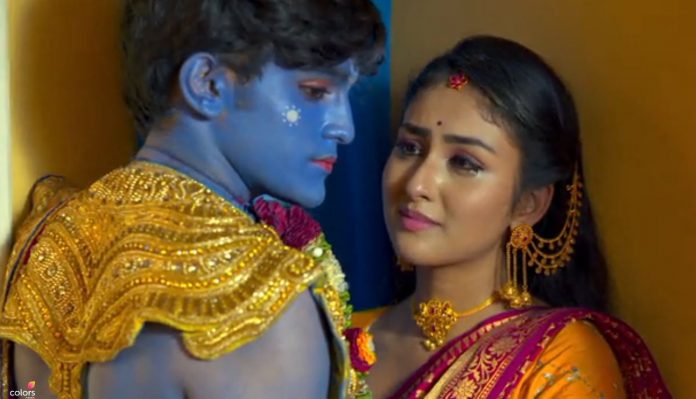 Barrister Babu 26th August 2021 Written Update Union chaos Bondita accepts Anirudh’s love proposal by confessing her feelings for him. They finally become united. Tupur sees Anirudh and Bondita together. She stops Sumati to reveal that Anirudh has come home to take Bondita with him. She tells Sumati that Bondita is still refusing to Anirudh because of the swear given by Sumati. She adds that Anirudh loves Bondita and wants her to come along, but Bondita refuses to go with him. Sumati is not surprised to know this, because she knows Bondita will never go against her promise.

Tupur tells that Bondita is helpless to see her love in front and not go ahead, because of Sumati’s swear. She requests Sumati to let Bondita go away with Anirudh and live happy. She asks Sumati to free Bondita from the swear. Bondita and Anirudh hide from Thakumaa and Chandrachur. Bondita asks him to leave, while he asks her to accompany him. Bondita tells him that she can’t move until she knows Sumati’s decision.

She wants to know if Sumati is giving her consent or not. She waits for Sumati, as Tupur instructed her. Tupur convinces Sumati to give the deserved freedom to Bondita. Bondita keeps an eye on Sumati to know her reply. She gets anxious. Sumati finally gives her nod to Bondita.

Anirudh knows well that Bondita won’t break Sumati’s swear. Anirudh makes a wish that Sumati understands their love. Bondita happily shares the news with Anirudh that Sumati has approved their relationship. Bondita gets ready to elope with Anirudh. Anirudh tells her that nobody can stop them now. He gets a rope to climb down. He assists Bondita. Anirudh and Bondita escape from Thakumaa’s haveli. They run on the roads, holding hands, in fear of getting caught by Thakumaa and Trilochan.

Bondita and Anirudh are still lost in each other. They confess their love again and again, being happy together, while Trilochan and Thakumaa get ahead with their noisy arguments. Trilochan and Thakumaa are against Anirudh and Bondita’s union. They both want to catch the lovers and punish them. Triochan wants to safely take Anirudh home, and asks Thakumaa to control Bondita. Thakumaa doesn’t want to spare Anirudh for provoking Bondita’s feelings. A long argument goes on between the two.

Trilochan orders her to get Bondita in front of him. Thakumaa asks her guards to find Anirudh from anywhere. She threatens Trilochan that she will shoot Anirudh in front of his eyes. Trilochan threatens to kill Thakumaa if she hurts Anirudh. Bondita tells Anirudh that she loves him a lot. She also tells him the golden words, I love you. They rejoice in the moment, until the guards reach the door. Bondita asks Anirudh to run away. He refuses to run, leaving her behind, when he promised to walk along and keep the relationship of their love forever.

He tells Bondita that he will never leave her hand. Tupur comes to their rescue. She points the gun seeing Anirudh, but Bondita defends the attack. Bondita confesses that Anirudh and she are in love. She requests Tupur to not harm Anirudh and let him go. Tupur has no objection to their love story. She wants Anirudh to take Bondita away from her life. Tupur convinces them to go away. She guarantees that she will talk to Sumati and convince her on their behalf. She asks them to stay hidden to save their lives, since the guards are looking for them. Tupur asks them to live together for the sake of their love.

She becomes a big support in the hour of need. Bondita fears that Sumati will not agree to Tupur. She prepares herself for getting separated from Anirudh. She wants to live the moment, thinking this moment will never come again in their lives. Anirudh promises her that they shall never get separated. He is ready to fight anyone for Bondita’s sake. He tells her that he will stop the moment for her. He wants to become inseparable.

Tupur struggles to convince Sumati to let Bondita and Anirudh go away and live their lives in peace. She tells that only Anirudh can keep Bondita happy. Tupur fails in getting Sumati’s consent. Sumati also gets blind in enmity. She wants Bondita to never go to Anirudh. Tupur tricks Sumati into giving her nod to Bondita. Tupur makes Bondita believe that Sumati has given her consent.

Bondita and Anirudh fall into an illusion that Sumati has blessed their relation. They prepare themselves to elope and make a new beginning of their life. Tupur wants them to leave as soon as possible before Chandrachur comes. Chandrachur realizes the way Tupur cheated him by taking Bondita’s place. He gets raged and promises to not spare Tupur. Tupur takes a big risk to save her marriage. Keep reading to know what happens next.

Reviewed Rating for Barrister Babu 26th August 2021 Written Update Union chaos: 3/5 This rating is solely based on the opinion of the writer. You may post your own take on the show in the comment section below.