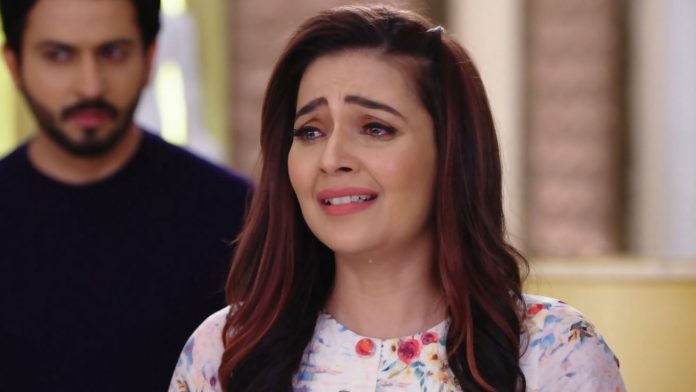 Kundali Bhagya 2nd September 2021 Written Update OMG twist While Rakhi and Sarla pay gratitude to each other for becoming Preeta’s strength, Karan serves the same purpose. Karan can’t see Preeta upset. He makes sure that Preeta isn’t affected by Sherlyn. Kritika tells Prithvi that she appears as a burden in her Maayka to some people, so she doesn’t want to stay in her Maayka for long. She asks him to speak to his mother and make arrangements for their stay once his mother returns to the city.

Prithvi learns that this problem is also created by Sherlyn. He gets mad that Sherlyn isn’t giving him a moment to live in peace. Prithvi wants Sherlyn to stop targeting Kritika and Preeta, since they both are simple and sweet girls compared to Sherlyn’s cunning nature. He assures Kritika that he will end her tensions soon.

On the other hand, Karan and Preeta wait for the reports from Dr. Anchal, who was referred by Sonakshi. Preeta appears normal like before, and looks after the Luthra family. Mahesh also forgives Preeta for hiding the matter, knowing it was more tough for her as well. Rakhi and Mahesh hide their emotions of sorrow from Karan and Preeta. They decide to not burden any of their bahus with their dreams and hopes of a grandchild. Rakhi prays that Preeta gets a good news and recovers her lost faith again.

Sonakshi arrives at Luthra house to meet Karan and Preeta. She apologizes to Preeta for the unexpected drama at her wedding. Sonakshi clears that she is at a bigger loss than Karan, since it was her wedding which broke with the revelation of her past. She wants Karan to understand her pain, her loss of a child and also how she lost Rajat. She pleads to the Luthras to forgive her and give her a chance to fix up things. She tells Karan that she is ready to help Karan and Preeta in achieving their baby dreams. What can Sonakshi do for them? Keep reading for full updates.

Prithvi tells Kritika that she is a modern girl, she shouldn’t think of Maayka and Sasural, he stays in his Sasural, but he lives on his own and earns for himself, he isn’t dependent on anyone. Kritika tells him that not everyone’s thinking is like him, she should not interfere in her Maayka matters. He asks her not to tell him that Sherlyn had filled this junk in her mind. He tells her that Sherlyn is jealous of Preeta and her. He adds that Kritika has her perfect life, unlike Sherlyn, that’s why Sherlyn plays the divide and rule politics. He asks her to give a solid reply to Sherlyn next time.

He consoles Kritika. He tells her that she shouldn’t think of Sherlyn. Kritika tells that Sherlyn always insults her. Prithvi asks her to stop thinking about Sherlyn and stay happy. Kritika asks him to do his work. Prithvi feels attracted towards Kritika. He doesn’t want to love her. He tells himself that he just loves Sherlyn. Sherlyn wants the entire family to hate Preeta. She finds Bani and Kareena upset.

Bani and Kareena are still upset that life has changed much, they lost their happiness. She tells that Rakhi would have felt bad too. She is angry on Preeta. Sherlyn complains to them about Kritika. Kritika tells them what Sherlyn told her. She tells Kareena that Sherlyn told her to mind her own business, since she isn’t Luthras’ daughter after marriage, she should not stay in her Maayka and go to her Sasural. Kareena confronts Sherlyn for hurting Kritika’s sentiments.

Sherlyn acts in front of them. Prithvi watches Sherlyn’s drama. She tells them how Kritika misbehaved with her and hurt her. She tells them that she didn’t want to provoke them against Preeta, she was the most happy knowing about Preeta’s pregnancy. She lies to the family. Preeta and Kritika know that Sherlyn is lying. Sherlyn tells that she misses Rishabh in her life, she wants to become a good bahu for the Luthras. Kareena calm down Sherlyn. Sherlyn tells them that she told that to Kritika in anger. Rakhi understands Sherlyn’s emotions. She apologizes to Kritika from Sherlyn’s side.

Kritika tells sorry because of Rakhi. Sherlyn gets glad to get Rakhi’s support. Prithvi thinks Sherlyn is playing good politics, she is really dangerous. He was thinking that everyone would scold Sherlyn. Karan comes home from the practice. Prithvi tells Kareena that Kritika has a big heart, that she apologized when she wasn’t at fault. Karan opens the doors for Sonakshi. He asks her the reason for her arrival. Even Bani wants the know the same. Preeta is not surprised to see Sonakshi.

Sonakshi tells that she had to come and mend their relations before leaving from their lives. She wants to make their terms better. Kareena asks her not to remind them the past. Bani reprimands her for bringing a storm in their lives. Rakhi also taunts Sonakshi for hurting her so much. She tells that she made a mistake to form a relation with Sonakshi. She calls Sonakshi their past. She wants to forget the bad past and move on. Sonakshi cries hearing Rakhi’s taunts.

Preeta tells her that their relation won’t end if Sonakshi goes away, she can stay in contact and call her if she needs any help. She promises that she will always be there for her. Sonakshi hugs Preeta. She knows that Preeta has a big heart. She bids a good bye to the family. Karan and Preeta cry for Sonakshi, that they lost a good friend because of the past. Preeta’s promise to Sonakshi shocks the family. Preeta tells Karan that she spoke to Sonakshi and gave a closure to the matter. She is tensed that Mahesh has locked himself in the room once again. Karan asks her to give Mahesh some time.

Reviewed Rating for Kundali Bhagya 2nd September 2021 Written Update OMG twist: 3/5 This rating is solely based on the opinion of the writer. You may post your own take on the show in the comment section below.