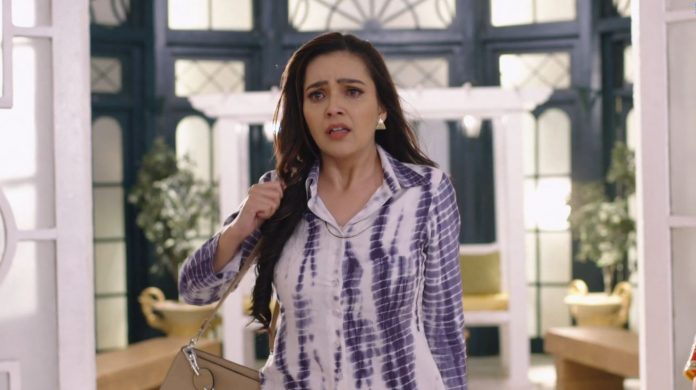 Kundali Bhagya 8th September 2021 Written Update Sonakshi storms Mahesh wakes up early for Pihu, while Pihu is still sleeping. He thinks she is habitual to wake up early, since she lived in the NGO. Bani and Kareena come home from shopping. Mahesh asks them from where are they coming. Kareena complains of Bani, who took her for shopping at 6am for Pihu’s sake. Bani tells that she is mad in her own joy. She wants to wake up Pihu and show the designer clothes. Mahesh and Kareena ask Bani to let Karan and Preeta sleep with their angel, they will get her downstairs when she wakes up. They go to have breakfast till then.

Rakhi winds up some baby toys, and brings new ones for Pihu. Sarla meets Rakhi. She surprises Rakhi and Kritika. She tells them that Shrishti and she were missing Pihu and came home to meet her. She is really excited to meet Pihu. She tells Rakhi that Pihu is sleeping, so she will be with Rakhi helping her decorate the room. Kritika tells that she is glad to meet Sarla. Rakhi tells Kritika that she decorated the room for a newborn baby, but she has to now decorate it according to Pihu’s age. Sarla tells that Rakhi would love Pihu a lot.

Kritika gets inside the room to wish them happy morning. Sarla tells that they will come when Pihu wakes up. They didn’t know Karan and Preeta are still sleeping. Kritika apologizes for disturbing them. She asks for Pihu. Preeta tells that Pihu would have gone downstairs or to the washroom. They don’t find Pihu anywhere. They worriedly look for Pihu. Prithvi has plotted against Luthras. He doesn’t want anyone to stay happy if he isn’t happy. He wants Luthras to cry.

Sherlyn and Prithvi want Luthras to lose their everything. The entire family looks for Pihu. Sherlyn gets happy seeing their smiles vanish. Kritika asks her if she has seen Pihu. Shrishti learns that Pihu is missing. Shrishti finds Pihu hiding in the kitchen. She catches Pihu. Pihu tells that she lost because of Shrishti. Shrishti finds her cute and naughty also. She brings Pihu to the family. She tells them that Pihu was playing hide and seek. The family receives a big relief on seeing her. The family showers love and care on Pihu.

Preeta cries emotionally. Pihu asks them who had scolded Preeta that she is crying. Shrishti tells that Preeta is crying for Pihu. Preeta asks Pihu where did she hide. Pihu tells that she was playing a game. Preeta asks her to inform them before hiding next time. Karan’s worry also ends seeing her. Pihu apologizes for troubling the family. Preeta asks Pihu to call her mumma. Pihu calls her mumma sweetly, making Preeta overjoyed. Karan and Preeta hug Pihu.

Rakhi feels Karan’s family got completed. Mahesh tells that Pihu will play with them. Karan tells that he will have an apple. He asks Pihu to eat an apple and stay healthy. Sameer tells that Karan was too naughty in childhood. Prithvi checks the sacks in which he got the Luthras business files. He wants to ruin Luthras business by using their documents against them. Luthras sense that a storm is going to arrive. Sonakshi walks inside the Luthra mansion. Bani hopes that things stay fine for them. She doesn’t want anyone to snatch their happiness. Sonakshi meets the family to claim her daughter Pihu. Sonakshi brings a storm in the family. What will happen next? Keep reading.

Reviewed Rating for Kundali Bhagya 8th September 2021 Written Update Sonakshi storms: 5/5 This rating is solely based on the opinion of the writer. You may post your own take on the show in the comment section below.