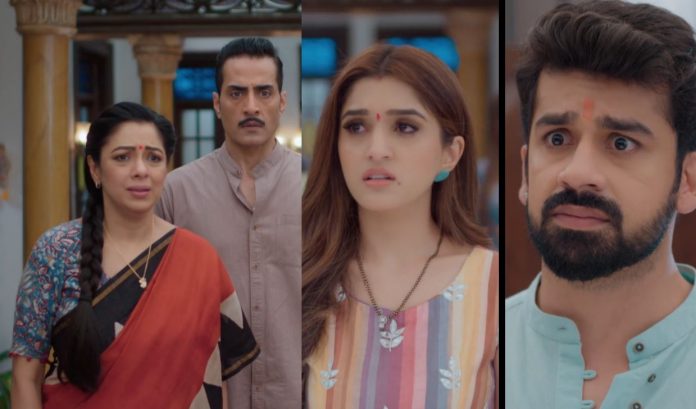 Anupama 17th September 2021 Written Update Anupama best move Vanraj doesn’t want his family to pay a price for Anupama’s success. Paritosh understands him. He doesn’t want to see Anuj around Anupama. Devika asks Anupama to tell Leela what she wants to go, and give few slaps to Paritosh to open his eyes. She asks Anupama to love herself and not lose the opportunity. She shows the reality to Anupama. She tells Anupama that Leela still supports her son even now, knowing her son is wrong. She asks Anupama to not get under family pressure. Anupama tells that she got much love from the family, especially from Hasmukh.

Devika tells that Hasmukh is sensible, he has called her to explain her. Paritosh tells that he will ask Anupama to refuse to the offer. He thinks if Anuj still likes Anupama. Vanraj tells that Anuj isn’t married, he doesn’t even have a girlfriend, maybe he loves Anupama. Paritosh grows angry. Devika tells Anupama that Leela and Paritosh are good for nothing. Devika asks Anupama to not follow anyone’s instructions as a puppet. Anupama asks her not to provoke her against her family. Devika doesn’t listen to her.

Anupama accepts the partnership, and brings sweets home. She tells Vanraj that she decided to work with Anuj to prove Vanraj wrong. She signs the papers and shocks Vanraj. Anupama doesn’t want Vanraj to become an obstacle in her way when she is trying to balance and walk alone. Anuj wants to just keep friendship with Anupama, and prove that true relations of heart do exist in the world. Anuj also eats sweets at home, hoping to get a call from Anupama. Anupama calls Anuj to tell her decision. She fixes a meeting with Anuj at his office. Will Anupama get to see Anuj’s selfless side? Keep reading.

Anuj speaks to his manager. He keeps everything ready and just waits for Anupama’s response eagerly. Anupama asks Devika to leave. Devika refuses to go. She asks Anupama why is she scared, as if she is really wrong. She asks Anupama to move on and make the family proud, without getting afraid of anyone. She asks her to convince Leela and Paritosh. Anupama knows that Devika doesn’t have anyone to answer. Devika tells that she doesn’t have to answer anyone, though many question her to limit.

Devika tells her that she is also working with Anuj. Devika informs Samar that she explained Anupama but she doesn’t want any family clashes, she isn’t agreeing at all. She wishes Anupama thinks for herself once. Anupama gets confused about the offer. Vanraj thinks Anupama will refuse, because she won’t be able to handle the pressure. Meanwhile, Devika meets Anuj. She tells him that Anupama will refuse, she is a great selfless woman who keeps family first. She asks him to convince Anupama. Anuj tells that men always control a woman’s life, he won’t do this mistake, he will honour Anupama’s decision. He feels Anupama has a sole right on her life. Anupama teaches the dance in the academy. She stays confused about the offer.

Leela tells that she will not tolerate Anupama’s wrong decision. Kavya provokes her against Anupama. Anuj is hurt that his heart cheated him and made him weave a hope to work with Anupama. He tells GK that Devika came to the office and told him that Anupama won’t accept the offer. He hates himself that he has lost control on his heart. He regrets that he has invited problems for himself. He wants to leave from the country. Anupama asks Devika to forward Anuj’s number. Anuj wants to cook the food and stay busy to avoid the thoughts.

He decides that she won’t work with him. She challenges him to stop her if he can. Leela asks Anupama to think of others once, how long will she think of herself. Anupama tells that she always lived for the family, she forgot herself for 25 years, she lost her individuality and identity for the sake of other’s happiness. She tells that she wants to think of herself now, she isn’t wrong. Leela reprimands her. Anupama takes a firm stand to do justice with her dreams. She asks Leela to permit her daughter to live her life as she wants. She knows that Vanraj’s thinking is really narrow, its his problem to deal with.

She asks Vanraj to stay jealous if he wants. She reminds that she got happy for Vanraj’s new start, while Vanraj isn’t supporting her. Leela doesn’t want Anupama to work with Anuj. Anupama asks her to reason out. Vanraj calls her shameless to act brave and become a heroine. Anupama tells that she is a heroine in her own story. Hasmukh, Kinjal and Samar applaud her. Leela tells that they don’t know Anuj’s feelings. Anupama tells that Anuj’s feelings don’t matter to her, her own feelings matter. Anupama declares that she will go to office to meet Anuj. Vanraj challenges that he will stop Anupama’s flight to success at any cost.

Reviewed Rating for Anupama 17th September 2021 Written Update Anupama best move: 5/5 This rating is solely based on the opinion of the writer. You may post your own take on the show in the comment section below.