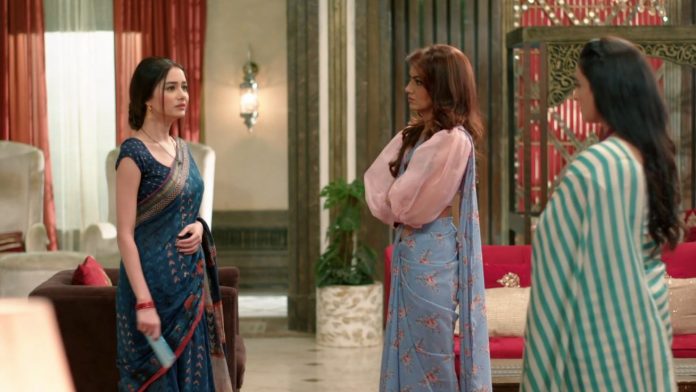 Kumkum Bhagya 17th September 2021 Written Update New Drama Tanu takes the information from Manish. She bribes him to know the entire matter. Manish tells her about Abhi’s condition. She wants to know what had happened at Pragya’s house. He tells that he doesn’t know that, he was at the hospital. Tanu wants to use Pragya’s weakness. She knows it will be a big shock for Aaliya also, she will ruin her plan, she won’t let Abhi come back. She wants to see how Pragya gets saved from the coming problem. He calls her aid to get help.

Pragya looks after Abhi at home. She asks Abhi if he gets happiness by troubling her, then she has no problem with it, but he shouldn’t hurt himself. She tells him that she will be with him. She gets at peace after two years. Sushma is worried for Pragya. Prachi asks Ranbir and Siddharth not to discuss work during breakfast. She asks them to talk about work at office. Rhea apologizes to Prachi as Aaliya advised her.

Rhea speaks humbly again. She tries to end Prachi’s doubts on her. She tells that she is insecure and possessive about Abhi, but she isn’t the old Rhea now. She asks Prachi to forgive her once. She does a convincing drama and melts Prachi’s heart. She tells that when Pragya went missing after the accident, they all got separated, but Prachi had Ranbir with her, Abhi wasn’t with her, she had nobody to give her an assurance of a good future. She cries to win Prachi’s faith back. Prachi hugs her. She forgives Rhea.

Rhea tells that its good that her feelings came out. She tells Prachi that she needs love, she wants her sister back. Prachi promises to always support Rhea, who means a world to her. Rhea tolerates Prachi just for Ranbir. Siddharth finds Rhea showing interest in Ranbir. He isn’t sure if his thinking is right. Aaliya and Tanu meet Pragya to know about Abhi’s accident. Tanu tells that she has come following Aaliya to stop her from taking Abhi home.

She asks them to talk to her lawyer. She suggests that Pragya also hires a lawyer if she wants to avoid the jail stay. Rhea pities Ranbir, who didn’t get a wife worthy of him. Siddharth stops Rhea to ask her something. She gets rude towards him. He asks her what problem does she have with him. She doesn’t want him to doubt her. He tells her that her behavior has changed completely, she doesn’t even like him. He feels ignored by her. Rhea asks him if he is suspecting her. She argues with him. He questions her if she doesn’t see him even in their bedroom.

Ranbir asks Siddharth to come for work. Pragya asks Tanu why does she think such. Tanu tells that she do cares for Abhi, even if she has sold him. Pragya tells that Abhi is her husband now. Tanu asks her not to lecture about Abhi. Sushma rebukes Tanu. Tanu tells that she has come to break Pragya’s ego. She asks Pragya if she thinks she hates Abhi and sold him just for money. Pragya tells that Tanu just loves money, she is a greedy woman, who can never value love or relations. Tanu asks Pragya to talk to the lawyer. She wants to see Abhi. Aaliya asks Pragya why didn’t she inform them about the accident, their relations with Abhi didn’t break yet.

Pragya and Sushma talk to the lawyer. Ranbir asks Siddharth if he is lost. He offers help. Siddharth asks how will he help him. Ranbir tells that he is with him at the office just to help him. He wants to focus on his startup and family. He promises that he won’t tell Prachi about his problem. He asks Siddharth to trust him. Siddharth doesn’t share it. Ranbir does a drama to convince Siddharth. Siddharth tells that they will have a talk at home. Ranbir asks him to rest assured, he will fix everything. What will Tanu do against Pragya this time? Keep reading.

Reviewed Rating for Kumkum Bhagya 17th September 2021 Written Update New Drama: 5/5 This rating is solely based on the opinion of the writer. You may post your own take on the show in the comment section below.