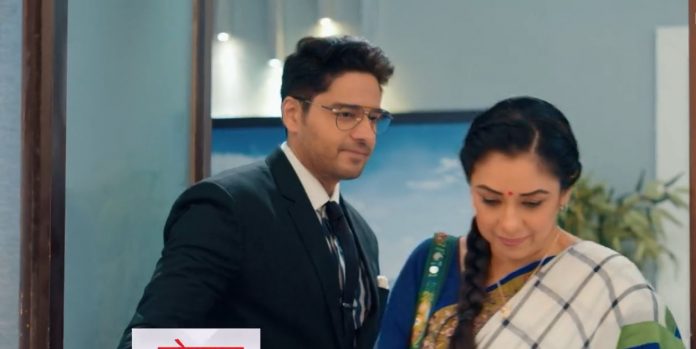 Anupama 18th September 2021 Written Update Rocking Anupama tells the family that Anuj might have feelings for her during college times, but its 26 years now, Anuj is a rich guy, who would never fall for her knowing she is a mother of three grown up children. She tells that she isn’t a match for the classy Anuj. Kavya asks Anupama not to accept the partnership. Anupama wants her to shut up. She asks her why don’t everyone trusts her talent. Vanraj tells that Anuj is just doing a favor on her. Anupama tells that she is accepting the favor to help other women. Vanraj asks her to see what Anuj is doing to get back the favor.

Anupama wants to choose the path and walk alone. Vanraj discourages her that she will fail. She is ready to fail and then struggle on her own conditions. He tells that she has got wings on meeting her old crush. She challenges him to stop her and show, since she will be flying now. She declares that she will go to Anuj’s office in the morning. Samar and Kinjal give her best wishes. Anupama breaks down by Vanraj and Kavya’s taunts. She feels indebted to Anuj for saving Samar’s life.

She tells that she has no feelings for Anuj, Vanraj is suspecting her for something that doesn’t exist. She doesn’t want to bear their suspicion. She adds that she didn’t break anyone’s trust, but they still accuse her. She doesn’t care for their thinking. She wants to continue her fight. Samar and Kinjal understand her. They hug Anupama and encourage her. Kavya asks Vanraj to stop Anupama from insulting them, they can’t be losers when Anupama becomes Anuj’s partner. Vanraj gets enraged. Anupama begins preparation for her new life. She wants to work hard, and not make Anuj regret for his faith. Anuj waits for Anupama’s reply.

Anuj writes poetry while thinking of Anupama. GK tells that Anuj always has his memories, feelings and poetry along. Anuj feels proud of Anupama. GK praises his skills of hiding his feelings so well. Anuj tells that Anupama means a world to him, but he is just a businessman for her. He doesn’t want to break her trust, that there is nothing in his heart for her. Leela and Paritosh are also upset on Anupama’s decision. Anupama finishes the household chores. Leela, Vanraj and Kavya leave Anupama with taunts. The family gets into an argument.

Anupama tells that she will never leave her values behind. Vanraj tries to demotivate her. Anupama calls him a problem in her life. Samar and Paritosh get into a fight. Hasmukh stops Leela and Vanraj from their disgusting thoughts. Leela blames Anupama for the clashes. Later, Anupama meets Anuj to accept the offer. She tells him that she will work with him, but he shouldn’t keep any other expectations from her. Anuj welcomes her as a business partner. Keep reading.

Reviewed Rating for Anupama 18th September 2021 Written Update Rocking: 5/5 This rating is solely based on the opinion of the writer. You may post your own take on the show in the comment section below.