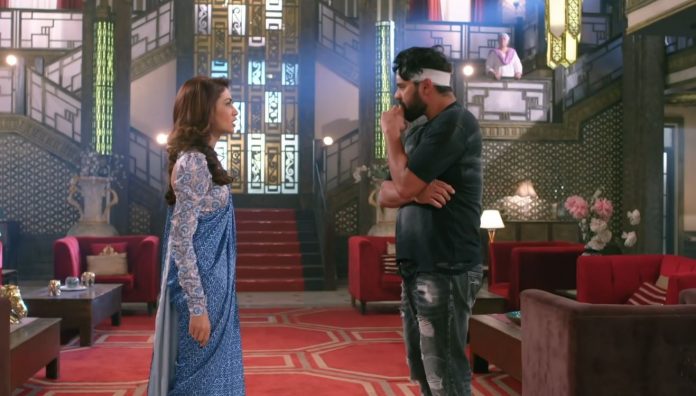 Kumkum Bhagya 24th September 2021 Written Update Abhi curses fate Abhi doesn’t find alcohol anywhere. He grows restless to drink. Pragya stops him from going out. She tells him that she is more stubborn like him. Abhi tells that he didn’t do anything such that he dominates her. She tells him that he can’t go out and drink. He feels his fate has cursed him that he has fallen in love with Pragya. He angrily confesses that he loves Pragya. Tanu and Aaliya watch their argument. Baljeet also finds them in the middle of the argument, and grows worried. She can’t see Abhi struggling in pain.

Pragya gets emotional seeing Abhi. Pragya tells Tanu that drinking isn’t allowed in her house. Tanu questions Pragya if she has fallen in love with Abhi once again. Pragya doesn’t think to reply Tanu. Meanwhile, Rhea plans to go out with Ranbir with the help of Pallavi. She gets a letter from her friend. She meets Pallavi to ask for her help. She asks Pallavi to inform Prachi about her friend’s wedding invite. Pallavi tells Prachi that Rhea has to attend her friend’s wedding in Bangalore, but she can’t go alone.

She asks Ranbir to take Rhea to Bangalore for attending the wedding. She doesn’t think Prachi should have any problem with it. Ranbir agrees to take Rhea, but thinks of sending Siddharth with her. He makes a plan sort out Rhea and Siddharth’s issues. Rhea gets elated thinking Ranbir will be coming along. Dida senses Rhea’s wicked intentions behind her cunning smile. She fails to alert Prachi about it. However, Prachi also finds it odd this time.

Rhea decides to not harm herself this time, and instead take her revenge on Prachi. She tells that this time she won’t die, Prachi will die. She doesn’t want to fall weak. She wants to win and get Ranbir back. Pragya feels bad seeing Abhi restless and looking for alcohol. She calls the doctor. She tells him how Abhi is searching for alcohol. He asks her to stop Abhi, it will get easier for Abhi to withdraw himself from the addiction, the alcohol is like poison for him, he needs to stop drinking if he has to live. She tells that she will stop Abhi.

Abhi asks Pragya where did she hide the alcohol. He tells that she can’t control him, he can pay for the alcohol, he isn’t her slave. She tells that she didn’t hide the alcohol. Baljeet finds them arguing. Abhi tells that he will live his life his way. She asks him to stop drinking. He asks her not to lecture him. He gets too angry. She asks him to divert his mind and control himself. He asks her not to play mind games with him. She tells that she worries for him, that’s the reason she is stopping him from drinking. She asks her to come to senses, she doesn’t care for him now. He tells her that he used to worry for her, he was finding her and waiting for her since two years.

He asks her why didn’t she come to stop him from drinking and end his worry. He tells that he started drinking in her memory. He adds that she pushed him away when he came to meet her, she never cared for him. He asks her not to fake her concern. She apologizes for her mistakes. He tells that he will not forgive her for her deliberate plans. He asks Baljeet to see how Pragya is stopping him from drinking. He cries in pain. Pragya knows his anger and restlessness. She wants to tolerate his anger, but not allow him to drink alcohol. Aaliya and Tanu ask Tai ji to go to Baljeet and provoke her against Pragya.

Mitali tells that they should give alcohol to Abhi. Aaliya asks them to take an advantage of the situation. She asks Tai ji to provoke Baljeet against Pragya. She asks her to involve Sushma in the fight. She tells that Abhi and Pragya will fight, while defending their family. Tai ji asks if Abhi will leave and make them leave Pragya’s house as well. Tanu tells that they want Pragya to focus on the homely fights, so that they can plan to ruin Pragya. Mitali tells that they shouldn’t leave the luxuries. Tanu adds that Pragya can’t break the contract, else she will pay a big penalty. Mitali and Tai ji go to instigate Baljeet. Aaliya promises to ruin Pragya’s life. Pragya is moved by Abhi’s painful condition.

Shagun tells that Abhi’s family is troubling her a lot. Pragya apologizes to her on their behalf. Shagun and Anchal offer help to Pragya. Pragya tells that she is worried for Abhi’s drinking habit. Anchal tells that her elder brother also has the same drinking habit, his life left him, but Pragya shouldn’t leave Abhi, love brings courage and faith in a relationship. She encourages Pragya, knowing she loves Abhi a lot. Baljeet is upset because of Abhi’s condition.

Tai ji and Mitali try to fill her ears against Pragya. They tell that Pragya doesn’t care for Abhi. Baljeet tells that Pragya loves Abhi and cares for him a lot, she is stopping him from drinking. Tai ji tells that they love Abhi more. They tell that Pragya is making Abhi stay in pain. Abhi finds alcohol and drinks. Pragya asks Abhi how did he get the alcohol. He tells her that he will quit drinking if she tells him the right reason. She tells that she doesn’t want to handle his drinking habit. He asks her not to fake emotions.

Reviewed Rating for Kumkum Bhagya 24th September 2021 Written Update Abhi curses fate: 3/5 This rating is solely based on the opinion of the writer. You may post your own take on the show in the comment section below.