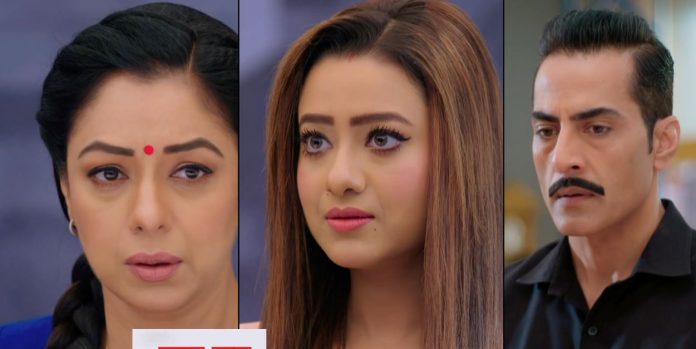 Anupama 9th October 2021 Written Update Kavya shocks Vanraj hinders Anupama and asks her where is she going. She tells that Samar is going to Delhi for a dance show, he is busy rehearsing with his group, he isn’t coming home, his friend will come and pick his bags. Vanraj yells at Samar and asks him to come home to take his permission. Samar refuses to come home. Vanraj asks him to take care of himself, if he doesn’t want to tell him anything.

Leela informs Vanraj that Anuj is sending Samar for the dance show, its a big opportunity, which Samar has bagged because of Anupama and Anuj’s friendship. Vanraj gets another subject to drag and insult Anupama. Later, he finds Kavya away from the home for long. He calls Kavya, but she doesn’t answer. Kavya surprises Anuj at his office. She apologizes for coming without an appointment.

Vanraj wonders if Kavya got disappointed with him, and went to Anuj to ask for a job. Kavya tells Anuj that she has some urgent work. Kavya accepts Anuj’s job offer and talks regarding that. Anupama doesn’t know if Kavya should join her project. Anuj asks Anupama to decide for her project, because she is leading it. He doesn’t want to put her in any uncomfortable situation. Anuj makes sure that Anupama doesn’t do wrong with herself, while helping others first. He knows Vanraj and Kavya are similar, both of them are jealous of Anupama and can’t see her happy. He asks Anupama to think well and decide. What will Anupama decide about Kavya’s job? Will Vanraj react aggressively again? Keep reading.

Samar tells that he will surely go, he will not stop for anyone’s sake. Vanraj feels his children are getting away from him. Samar doesn’t want any family drama. Vanraj warns Anupama about Anuj who is trying to make his chidren away. He threatens to slap Anuj this time, if he doesn’t mend his ways. Anupama and Kavya take his words lightly, and leave for their work, while Leela entertains Vanraj’s anger. Devika likes Anupama’s plan for the project. She asks her if things are okay in her house.

Anupama tells that she doesn’t care for Vanraj’s nonsense, she will just do what she wants. Devika likes it. Anupama tells that she is happy that Anuj has come with Kanha’s blessings for her, he is the wind which has empowered her to win. Anuj overhears their conversation. He likes hearing good things from Anupama. He meets them.

He asks Anupama’s ideas to select good cooks for their project. She tells that they will keep a cooking competition and also fix a good reward, so that the families of the participants don’t stop them. She tells that they can talk to the winners about the job after explaining the project. Anuj likes the idea. He keeps a condition that Anupama will be the judge, because she knows well about cooking. Anupama asks

Anuj to be a co-judge, because he is also a great cook. Devika tries to bring them together. Anuj understands Devika’s naughtiness. Samar and Nandini have a sweet talk. He tells that they can’t stop living by Rohan’s fear. He confesses love to her. Rohan overhears them and learns that Samar has gone to Delhi. He decides to take an advantage of the event. Vanraj is frustrated that Samar has also joined Anuj’s team. He fears that even Kavya has gone to Anuj to ask for a job. His fear turns out to be true. Kavya meets Anuj and Anupama. She requests Anuj to give her just 5 mins for a talk.

Anuj asks her the matter. Kavya tells that she wants to talk about the job offer. Anuj asks her to wait in his cabin. He finds Anupama upset Kavya. She is afraid that Vanraj and Anuj’s terms have spoiled a lot. She doesn’t want to make any mistake now. Vanraj tells the customers that Anuj’s special dish is out of the menu now. The customers ask Vanraj to please serve the dish. The guys make fun of his attitude. Vanraj loses his cool on the young guys and lectures them. This upsets the rest of the customers, who leave the cafe. Mama ji finds Vanraj upsetting the customers.

He asks Vanraj to change his behavior, else the cafe will get shut because of him. He shows Vanraj’s mistake of removing Anupama’s name from the cafe. He tells that they have everything just because of Anupama. The chef tells Vanraj that they have to take Anupama’s help, and put her special dish back in the menu, else the restaurant can’t survive. Vanraj asks him if he knows the dish recipe. The chef asks him to get Anupama back, just she can make the dish perfectly. Anuj explains Anupama that both Vanraj and Kavya have good experience, they can be an asset for his company, he wants Kavya to join the company, he can’t refuse to her and do injustice, but he doesn’t want his decision to make Anupama uncomfortable.

He wants Anupama to decide for the project, because she is most important. He asks her to decide if she can share the personal and professional space with Vanraj. Anupama tells that Vanraj can never tolerate if Kavya works with him, he can take any wrong move in anger. Vanraj scolds the chef and asks him to leave the job. The chef taunts him for being so thankless. He tells that Vanraj never valued Anupama, and he will not value anyone else. Vanraj wonders where is Kavya.

Anuj meets Kavya, who pleads him for a job. She promises that she will have her professional world in her control, she is in need of a job and is questioning her self-abilities sitting at home. She tells that she wants to join him. He tells that she is deserving of the job. He is ready to forget the past but on a condition. He tells that he doesn’t want her family drama in his office. He adds that the project and Anupama are very important to him, if Vanraj creates a drama in his office, then it will be the last day of her job, it will be just her responsibility to stop Vanraj. She thanks him for giving her the job. He tells that he left the decision to Anupama, she is the one who decided to hire Kavya.

He adds that Kavya might have done wrong with Anupama, but the latter just wants to do good, believing Kavya’s talents. He tells that fights suit a house, not an office. He doesn’t want Anupama’s hopes and dreams, and Kavya’s career to get spoiled because of Vanraj. He asks Kavya to decide if she wants to join after knowing his condition. Vanraj calls her. He wants to know where did Kavya go. In the next episode, Kavya returns home to inform Vanraj about her new job. Vanraj loses his cool seeing Kavya also becoming Anuj’s puppet just like Anupama. Kavya angrily asks Vanraj to take medical help for his growing aggression. Vanraj’s angry reaction leaves him hurt and Pakhi heartbroken. Keep reading.

Reviewed Rating for Anupama 9th October 2021 Written Update Kavya shocks: 5/5 This rating is solely based on the opinion of the writer. You may post your own take on the show in the comment section below.