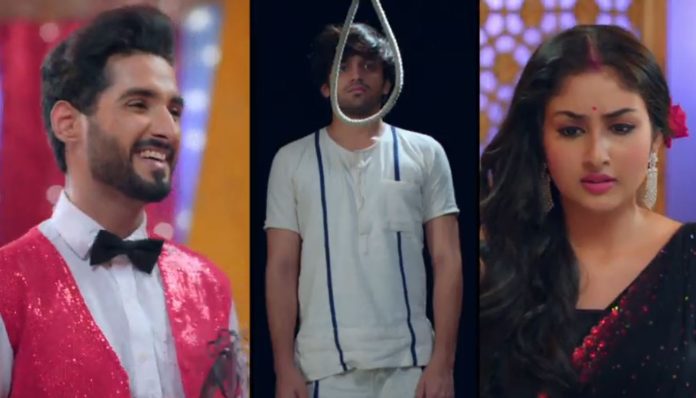 Barrister Babu 8th October 2021 Written Update Verdict day Bondita reaches the Calcutta club which is decorated with lightings. She enters the clubs surrounded by drunk men around who look at her with evil eyes. A waiter offers her the drink and Bondita finds a letter stuck at the end of the glass. In the letter, Bondita is asked to leave her bag on the table and come towards the left. She does as said and Chandrachur takes away her bag. Bondita is shocked to see her bag missing. She gets another letter in which it is written that she is required to wear a dress lying in a box.

Bondita picks up the dress and goes to change. Chandrachur who was roaming in the disguise of a waiter removes his eye mask. Chandrachur awaits her while she changes her clothes and comes back, wearing the western dress gifted by him. Chandrachur sets his eyes on Bondita. She realizes the growing threat on Anirudh. She imagines Anirudh’s death sentence again, which is just a day away. She is worried for the verdict day. She plans to somehow fool Chandrachur.

Chandrachur tells her that only he can save Anirudh from the murder case, but for that, she has to accept his condition. He asks her to come with him, he will take her to Dhaka and start a new life with her. Bondita knows his evil intentions. She plays along and accepts his condition. She strikes a deal to save Anirudh. Chandrachur gets a laugh hearing her reply. He makes a mistake to underestimate her. How will Bondita teach a lesson to Chandrachur?

Bondita agrees to Chandrachur’s deal just to save Anirudh’s life. She tells him that she is ready to go with him to Dhaka, but he has to save Anirudh from the murder case. He agrees to bring out his survival truth and save Anirudh. He tricks her and sends her away with his men to Dhaka. She prays for Anirudh and the family’s happiness, for whom she is making such a big sacrifice. Chandrachur joins her on the way and tells her how he tricked her just to take his enmity out on Anirudh. He adds that he will not save Anirudh, he wants Anirudh to die. Bondita turns helpless.

Chandrachur doesn’t let her move. He takes her to Dhaka with a goal to marry her, and live a happy life with her at the cost of her tears. He imposes his love on her, though she refuses to accept him. He tells her that she has no way to return, Anirudh will be dead in the morning. Bondita threatens to kill herself in rage, so that she dies and unites with Anirudh. Chandrachur stops her from killing herself, because he wants to win her. He confesses his crimes in front of her, that he is the person who ignited the spark of enmity between Thakumaa and Trilochan, between the two villages by his cunning plotting to turn them enemies. He tells her how he had made both the families against each other by his plans. Bondita is shocked to realize his rooted evil.

Bondita wears the outfit given by Chandrachur and looks for him around the club. He does not come in front of Bondita and roams around dressed as a waiter. A dancer drags Bondita’s hand and pushes her aside. A waiter scares her and dancers dancer around her. Chandrachur dances forcefully with Bondita and drags her to another place in the club. He removes his mask and Bondita says that she came to meet him but he should not have done so much drama. She asks him whether he can’t speak properly.

Chandrachur says to Bondita that he will not easily forget the scar she gave him on his face. He also informs her that when love is difficult it is more fun to acquire it. Bondita asks Chandrachur what does he want and at what cost he will come ahead and save Anirudh from getting hanged. She also tells him that she can no longer tolerate seeing his face. Chandrachur asks her that she hates him so much and loves her husband so much and that is why she came to Ravan’s territory.

Chandrachur tells Bondita that her love for Anirudh deserves a clap and he starts clapping. He tells her that if she wants him to save her husband she must right now come with him to Dhaka (the capital city of Bangladesh). If she comes with him then the next day he will come to court and show his face. Chandrachur says to Bondita that he will give a statement that he did not die but only fell unconscious.

He warns her that seeing him alive the judge will free Anirudh but if she doesn’t go with him to Dhaka he will escape to some far place. Anirudh will be hanged despite being innocent on Vijaya Dashami. Chandrachur gives her an option to either be his wife or be a widow. He asks her to quickly give her decision but Bondita is shocked. Chandrachur prepares to leave when Bondita stops him and says that she will come with him to Dhaka.

Chandrachur is extremely happy but Bondita asks him on which grounds she can believe that he will go to save Anirudh. Chandrachur tells her that she doesn’t have any option other than believing him and he is doing all this to possess her and as she is ready to go with him, he doesn’t have any issue with Anirudh. He tells Bondita that he wants Anirudh to stay alive because he struggled so many years to be with Bondita and wants Anirudh to suffer now for her. He asks her if there are any more questions or they can leave. Bondita says no and they both prepare to leave.

Chandrachur’s men come and inform him that police are roaming around to search for Bondita. Chandrachur becomes angry with her for tricking him but she says that she did not tell anything to the police. Chandrachur’s men tell him that she did not inform the police and someone has filed her missing complaint. Bondita asks Chandrachur to go and give his statement before it’s too late. He tells her that he will not go anywhere till she reaches Dhaka and says he does not want any arguments on this. Bondita gives an idea of going to Dhaka on a food van and decide quickly.

She warns Chandrachur that if anything happens to Anirudh she will not come to Dhaka. His men say that it is a good idea as the police will not check in a food van. Chandrachur agrees and tells his men that he will go and buy the driver while they keep a watch on Bondita as she is very smart. He offers a hefty bribe to the driver and he agrees to take them. Chandrachur orders Bondita that she must go to Dhaka with his men and only then he will give a statement in the court the next day and come to Dhaka.

He warns her to not argue with him. Bondita does as said and leaves for Dhaka. She prays to Maa Durga to take care of Anirudh and the day of Vijaya Dashami to be a day of freedom for him. She says that she is aware that after Chandrachur’s statement it will be a day of happiness for Trilochan, Sampurna, and all others. But she is sad as she will not be able to be with Anirudh in his happiness. Bondita tells sorry to Anirudh and says she is doing all this to save him but at the cost of going far away from him forever.

Trilochan stands outside the house. Thakumaa tells her to come inside as waiting outside the house will not bring Anirudh. He says that he will also die with Anirudh. Thakumaa is shocked and asks him to come inside as the climate is becoming bad. It starts raining heavily but Trilochan doesn’t move. Sampurna takes an umbrella for him but he shouts at her saying that he has taken a pledge to go inside with Anirudh.

Trilochan prays to Durga Maa to do something or his lovely family will be scattered. He falls to the ground crying. Chandrachur’s men stop the car and Chandrachur enters. Bondita says that it is betrayal but he tells her that all is fair in love. He tells her that she must praise him for killing two birds with one stone. As in the first task, he acquired Bondita and in the second step, Anirudh will be hanged because of him.

Chandrachur laughs and tells Bondita that there were once a king and queen, both died and the story ended. He tells Bondita that now a new love story will start and that will be his and hers. Bondita tells him that his dreams will never get fulfilled and that she will tell everyone that he is alive. She is about to run but Chandrachur pushes her in. He warns her that her law will not work here. Chandrachur forcefully gets inside the van and orders his men to cross the border. Bondita tells him it is not right and requests the driver to not drive but they don’t listen to her. Chandrachur ties Bondita.

Trilochan and the family members are praying to Durga Maa except for Tupur who is smiling cunningly. Thakumaa says that tomorrow is Vijaya Dashami and Anirudh will surely come home and Bondita will not let their hopes die. Tupur is in a misunderstanding that Anirudh will not come home but a letter will come for her from Chandrachur and they both will settle in a faraway place. A police inspector comes and asks Anirudh about his last wish. He takes all his family member’s names and gets emotional. The inspector says that they can only fulfill his one last wish and he must decide which one it is.

Anirudh tells him that his last wish is to not see any of his family members while he is getting hanged. He tells that Bondita will try to be with him till his last time but they should not allow her. Anirudh is taken to another jail and Bondita is praying for a miracle. Bondita and Chandrachur reach Dhaka. He drags her on the streets. Bondita picks up a knife and warns Chandrachur to kill herself but he distracts her and takes away the knife. Chandrachur tells her that he loves her since childhood and cannot let her die. He says that she ran away once leaving him but now she has to live with him as his wife.

Bondita tells Chandrachur that his dream will never come true as in her heart there is only a place for Anirudh. Chandrachur shouts at Bondita asking what about his love and does she even know what all he has done for her. He confesses to all his crimes. Bondita is devastated. Will Chandrachur be arrested or Bondita will outsmart him? Keep reading.

Reviewed Rating for Barrister Babu 8th October 2021 Written Update Verdict day: 5/5 This rating is solely based on the opinion of the writer. You may post your own take on the show in the comment section below.