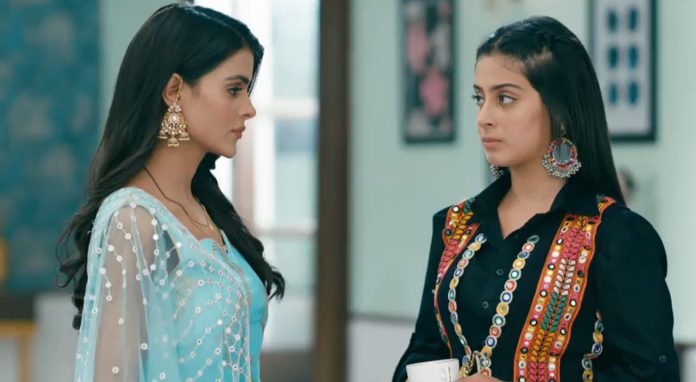 Udaariyaan 9th October 2021 Written Update Jasmin’s foul play Sweety alerts Jasmin that her plans won’t bring any gains to her. She asks Jasmin not to get against Tejo, else she may land in the pit herself. Jasmin wants to kick out Tejo from her life at any cost. Sweety finds Jasmin playing with her own life. She feels Jasmin is losing her mind completely. She doesn’t seem to support Jasmin and makes her realize that her lies can easily get caught. Jasmin cunningly plots to bring down Tejo in the family’s sight by targeting Khushbeer. While Tejo administers the medicines to Khushbeer in front of the entire family, she still gets blamed for the drug overdose.

Jasmin has spiked his tea with the drug to make his BP fall down. Jasmin wants to see the reaction of the family when Khushbeer’s life falls into trouble. Khushbeer feels uneasy for some time. Jasmin keeps an eye on him, until he faints down during the play round with Candy. Candy shouts when he faints. He alerts the entire family, who rush to see Khushbeer. Fateh calls the doctor for his dad. Doctor examines Khushbeer. He tell the family that Khushbeer’s BP had dropped significantly, that’s the reason he reason.

He gives the reason for the sudden BP drop. He tells that drug overdose is the reason, anything could have happened to Khushbeer if he wasn’t treated on time. Jasmin cares the least for anyone in Fateh’s house. Nimmo rebukes Tejo for always acting to love Khushbeer, and not looking after him well.

She asks Tejo how could she make such a big mistake and give double dose to Khushbeer. Gurpreet tells that she had already asked Tejo to check the medicines before itself. She asks Tejo to just go away before she tells something wrong and hurts her heart. Tejo cries when the family doesn’t trust her. She wonders how did the dose get doubled, when she gave him a single pill for BP. Jasmin smiles all the way to her victory. Fateh finds it hard to believe. He knows Tejo can never make such a blunder that could risk someone’s life. Will Fateh show his faith on Tejo? Keep reading.

Jasmin turns inhumane and targets Khushbeer, knowing he is Fateh’s father. Fateh joins the family for breakfast. Tejo tells that she is getting late for college. They ask Tejo to have food and go. Jasmin feels like a stranger when she isn’t invited by anyone to have food with them. Fateh too doesn’t call Jasmin. He offers food to Tejo. He still remembers Tejo’s likes. Jasmin spoils Tejo’s mood by coming between them. Tejo excuses herself. She tells Candy that she will come back home and take Candy to drop him.

Khushbeer tells that he will take care of Candy. Tejo tells Mahi that her car broke down, she isn’t able to book a cab, she got too late for college. Fateh offers to drop her on his bike. Tejo refuses to take his help. Khushbeer plays with Candy. He suddenly feels congestion in his chest. Candy grows worried when Khushbeer falls on the ground. Candy goes to tell the family that Khushbeer collapsed on the ground. The family runs to see Khushbeer. They grow too worried seeing him. Jasmin stays unaffected and emotionless. She waits for Tejo to get blamed. She doesn’t even realize Fateh’s pain. Jasmin fears that if Khushbeer dies, then she may fall in a big problem. Fateh calls the doctor for Khushbeer.

He reaches her to show his faith on his good friend. Tejo doesn’t want his shoulders to cry on. She is strong enough to handle herself. Fateh tells her that he has lost rights to console or support her. He knows that she gives support to others, she is strong and doesn’t need anyone, she can face all the sorrows and pain alone. She asks him if he has come to show her mistake. He tells that he has come to tell her that he believes her, she didn’t do anything wrong. He can’t believe that he can make such a mistake than takes someone’s life. He stops her to stop crying and go to meet Khushbeer.

Candy asks Khushbeer to have fruits and make the doctor away. Khushbeer tells that he just wants Candy with him. Jasmin reaches Tejo to pity her. She tells that Tejo does much hard work for the family, who accused her in a moment. She asks Tejo to cry in front of her. She tells that anything could have happened to Khushbeer by the drug overdose. Tejo realizes that Jasmin has done this disgusting thing. She confronts Jasmin why did she do this. Jasmin asks her not to blame her, and accept her mistake. Tejo asks Jasmin if she is behind this, then she will bring out her truth. She challenges Jasmin to fight her, instead bringing her family in between. Jasmin tells that its Fateh’s family, and Fateh is of her. Tejo warns that its her family, and she wants them safe.

Jasmin asks her not to cross her path. Tejo threatens her. She tells that she will prove her wrong and send her to jail forever. Tejo makes a mistake to spare Jasmin knowing her crime. The family prepares to celebrate Navratri. Biji suggests that they will organize Jagrata at home. She asks Tejo to make the preparations. Tejo takes the responsibility. Gurpreet tells that its not good to put every responsibility on Tejo. Jasmin gets happy to see Nimmo and Gurpreet against Tejo. Nimmo tells that she pities Tejo, that she didn’t settle in her marriage. She tells that Tejo has a bad fate that she is getting divorced. Khushbeer tells them that its their bad fate, that Fateh doesn’t judge people well.

He tells that Tejo is a right person, while Jasmin is the cunning girl ruining their lives. He asks Tejo to give him medicines as always. He can’t hear a word against Tejo. Jasmin turns upset that her plan failed. Tejo stays busy in the preparations. Khushbeer awaits Candy at home. Tejo tells him that Candy won’t come, his mum’s assignment has completed. The entire family misses Candy. Tejo gets glad that her plan is working. She wants Simran to return home and save her parents when she/Tejo is away.

She can’t trust Jasmin. Khushbeer asks Tejo to invite Candy’s mother home, they will request her to send Candy home. Khushbeer tells that he really wants to meet the lady who raised Candy so well. Tejo prays that Simran returns on Navratri. Jasmin wants to expose Tejo’s truth in front of Khushbeer before Tejo gets Simran home. She wants Khushbeer to know how Tejo is fooling the family. Keep reading.

Reviewed Rating for Udaariyaan 9th October 2021 Written Update Jasmin’s foul play: 5/5 This rating is solely based on the opinion of the writer. You may post your own take on the show in the comment section below.