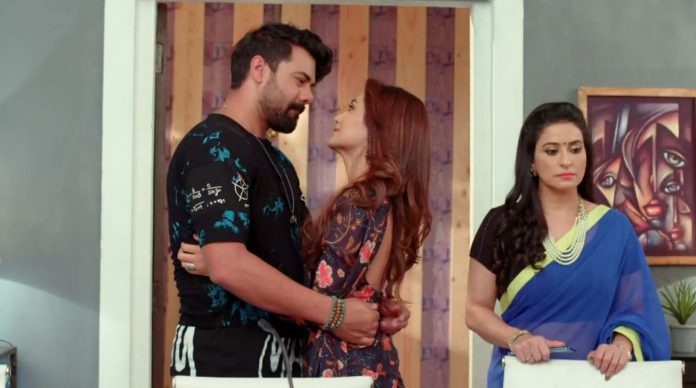 Kumkum Bhagya 11th October 2021 Written Update Abhigya wins Abhi gets angry on Aaliya and asks her to ask Tanu about Gaurav. He tells that she can’t work with Gaurav. She tells that Pragya would be lying about Gaurav. Abhi tells her that he was present there when Gaurav had tried to molest Pragya, Pragya isn’t lying, even if he wasn’t there, he would have believed Pragya because he knows her well, she isn’t like Tanu to question her own character for the sake of money. He tells that he trusts Pragya. Pragya overhears this and feels touched. Aaliya asks him not to have blind faith on Pragya.

He asks her why didn’t she tell him about the new job. She lies that it slipped out of her mind. He asks her how can she hide a big thing. He wants her to leave the job. Aaliya tells that she won’t leave the job, its a second chance for her, Gaurav is giving her a good salary, she will earn back her respect this way. She thanks Pragya for lecturing her on doing a job. She tells that she will also do work like Pragya now. Abhi apologizes to Pragya that Aaliya is working with her enemy. Pragya thanks him that he is supporting her.

She is indebted to his trust. They have a moment. He knows that she is a good person, even if she treats him badly. Pragya feels he is still so good, but doesn’t show it to her, he is still keeping their relation. Abhi, Pragya and Aaliya go to find out the tender result. Ranbir offers help to Prachi in the kitchen. Prachi asks him to go, he can’t help her, he will end up spoiling her work. He tells her that he likes to help her. She knows that he just wants to trouble her by his mischief. He asks her to learn naughtiness from him, he is really mad for her. Shaina finds them romancing in the kitchen. Shaina smiles seeing them.

She apologizes for breaking their moment. Ranbir guides her the way to the guest room. Ranbir goes to attend a call. Shaina goes to Rhea, who is trying to walk and get okay soon. She wants to separate Ranbir and Prachi. Shaina asks Rhea not to exert herself. Rhea tells that she wanted Ranbir with her. Shaina tells Rhea that nobody can stop them from romancing, they don’t need any special place to romance, Ranbir is romancing Prachi in the kitchen, he is a sweet husband, who loves his wife a lot. Rhea gets angered hearing about Ranbir and Prachi’s romance. Shaina tells that she is telling her the truth.

Rhea tells that the reality will change soon. She asks Shaina not to sing Prachi’s praise in front of her. Shaina asks Rhea not to make an imaginary life with Ranbir, let Ranbir and Prachi stay happy. Shaina tells that she had a fight with her husband, that’s why she is staying in the hotel. Rhea angrily asks her to leave. Shaina replies that Rhea can never change. Aaliya tells Gaurav that he will win the tender. She assures him. He can’t wait to defeat Pragya. Abhi reaches there with Pragya to protect her. Gaurav tells that he was waiting for Pragya so eagerly. He is hopeful to win the tender.

Pallavi asks Ranbir about his meeting. Ranbir reminds that she asked him to cancel his work and stay home. Vikram is really happy. He hugs Ranbir. He asks Pallavi to give the good news to the family. Pallavi tells that its too soon to celebrate. Ranbir asks her what’s the big news. He gets excited to know. Vikram tells that he got to know it from Dida. He congratulates Pallavi. He tells them that Pallavi is going to become the chairperson of Rajshri foundation. Ranbir and Prachi applaud Pallavi and congratulate her. Ranbir tells that it was Pallavi’s dream.

Vikram tells that Pallavi wanted to help the society by her work. Pallavi asks Prachi not to create any scene when Rajeshwari visits them. She wants Prachi to manage things without any drama. Prachi promises that nothing will go wrong. Pallavi tells that her trust and promise can never meet. Furthermore, Abhi tells Pragya that he forgot that they are in the office. Gaurav learns that Kiara is Abhi and Pragya’s daughter. He gets irked when Pragya insults him. Pragya doesn’t spare Gaurav. She tells that she has won the tender, Aaliya’s research couldn’t help Gaurav. Sushma tells that she knew it already that Pragya will win. Pragya tells Gaurav that he won’t get an entry in the office soon.

She asks Aaliya to find a new job and a new boss. She advises Aaliya to do household chores if she wants to make a living. Gaurav yells at Aaliya for her wrong research. He doubts that she is playing a game with him. Aaliya tells that she can never support Pragya. She tells that something went wrong, else he would have won the tender. Gaurav rebukes her. She suspects Tanu. Rhea asks Shaina not to tell her Ranbir and Prachi’s romantic stories. Shaina tells that Prachi loves her and will come to check on her ankle sprain. Prachi gets soup for Rhea. Shaina asks Rhea to have it. Rhea asks Prachi to go and handle the work. Prachi tells that she has a good news for them. Shaina asks Prachi if she is pregnant. Rhea is left shocked. Keep reading.

Reviewed Rating for Kumkum Bhagya 11th October 2021 Written Update Abhigya wins: 5/5 This rating is solely based on the opinion of the writer. You may post your own take on the show in the comment section below.