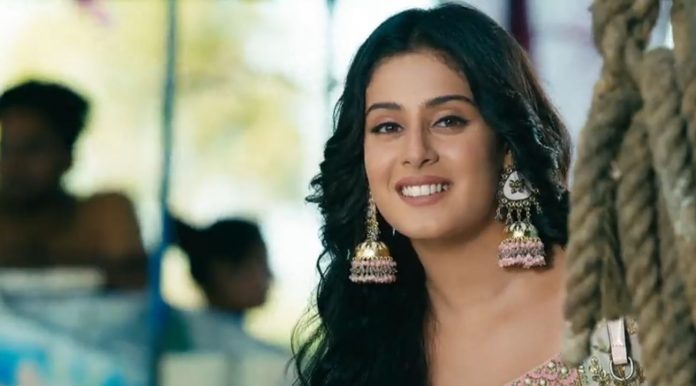 Udaariyaan 11th October 2021 Written Update Jass returns Tejo tells Simran that she is coming to meet her and give her a good news. Simran is hopeful that its the same news she is thinking. Tejo has worked out her plan’s next move by disappearing Candy from the family in order to make them miss him a lot. She wanted Khushbeer to demand Candy’s homecoming. She is hopeful that Khushbeer will accept Simran, on knowing that Simran is a single parent of Candy, who raised him with much hardships, but instilled good values in him. Tejo wants Simran to get acceptance in the house, which is very much necessary at this time, when Jasmin has openly threatened to harm Khushbeer.

Tejo wants to ensure that the family stays safe after she leaves post divorce. Tejo is really happy and dreams of Simran’s union with the family. She is determined to fulfill her promise to Gurpreet. Jasmin keeps an eye on Tejo. She overhears Tejo’s conversation. She takes Tejo’s phone when Tejo goes for a bath.

Jasmin messages Simran from Tejo’s phone, asking her to meet at the toy shop in the market area than coming home. She fools Simran, who really thinks that Tejo has changed their meeting point. Simran wonders how did Tejo change the plan suddenly. She gets tricked. She takes Candy to the toy shop, where Jasmin sends Fateh and Khushbeer as well. Jasmin schemes to make them face each other, and learn Candy’s truth. She wants them to have a big confrontation. Candy gets surprised to see Khushbeer in the market. He calls out Khushbeer and gets his attention, leaving Simran worried.

Simran doesn’t know how to face Khushbeer in Tejo’s absence. She wants Tejo’s support. Simran tries to hide from Khushbeer and Fateh. Jasmin stays around and hides herself from them. She wants a big drama to begin. Ahead in the track, Jasmin’s plan to expose Tejo’s plan of getting Simran’s son backfires. Tejo gets forgiven because of her good intentions. Tejo doesn’t fall in any problem because of Jasmin’s devious plan. A big twist will come in Navratri when Jasmin calls Jass back in Tejo’s life. She knows Jass is the Raavan of Tejo’s life. Fateh will stand by Tejo and save her from Jass’ evil. Will Jasmin’s truth come out at last after her huge final evil? What twists will come with Jass’ return? Keep reading.

Khushbeer tells Gurpreet that he is going to the market to buy some gifts for Candy. Fateh tells that he can accompany. Khushbeer doesn’t need anyone, but she sends them together. Jasmin wants everyone to get a huge shocker before Jagrata. She spies on Tejo, who suspects her presence. Jasmin realizes that Urvashi is Simran. She messages Simran from Tejo’s number. Simran calls to ask Tejo, but Jasmin doesn’t answer.

Jasmin gets glad to know that Simran is reaching in 15 mins. She rushes to the market to bring Khushbeer and Simran face to face. Simran sees Khushbeer, when Candy shouts seeing him. She hides with Candy. Fateh and Khushbeer miss to see Simran, who lives from there. Simran gets glad that Tejo had warned her in time. Tejo tells Simran that Jasmin was planning to ruin their efforts. She feels she has threatened Jasmin about the passports, even then Jasmin isn’t in control. Mahi asks Tejo to go and bring Candy home soon.

Tejo wants to go and bring Simran home. Tejo goes to meet Simran, who loses courage to meet Khushbeer. Tejo tells that Matarani has come home and will bless them. She asks her to get back everything she lost. Khushbeer plans the best day for Candy. Tejo convinces Simran to fix everything before Jasmin spoils things for them. Jasmin gets angry when her family comes home and asks for Tejo. Mahi tells that Tejo has gone to bring a special guest home. Simran tells Tejo that Candy is her illegitimate child, she isn’t married, she can’t answer the family. Tejo promises her that they will explain the truth to the family once they accept Candy. The family awaits Tejo to light the diya for the Navratri.

Jasmin uses Tejo’s absence. She goes to light the diya. Biji stops Jasmin, stating that just married couples light the diya together. The family enjoys the Jagrata. Gurpreet misses Simran. She reminds Khushbeer that he used to love his daughter as his Matarani. Khushbeer asks her to forget everything, and just focus on Candy. Fateh calls up Tejo to know where is she. Tejo tells him that she got late, but she is bringing Candy and his mum. She brings Candy home. Candy brings happiness in the house. He runs to meet Khushbeer.

Candy brings Simran inside the door. The entire family gets shocked seeing Simran and realizing that Candy is her son. They grow emotional. Candy introduces the loving family to Simran. Khushbeer didn’t expect this from Tejo. Fateh and the rest of the family members also get a huge shock. Gurpreet gets happy that Tejo has kept her promise. Khushbeer doesn’t know how to react. Tejo pleads him to accept Simran, his daughter. Jasmin awaits Tejo and Khushbeer’s relation to turn sour. She expects Khushbeer to throw out Tejo from the house. Fateh and Gurpreet realize the big move taken by Tejo for the sake of the family. Keep reading.

Reviewed Rating for Udaariyaan 11th October 2021 Written Update Jass returns: 5/5 This rating is solely based on the opinion of the writer. You may post your own take on the show in the comment section below.