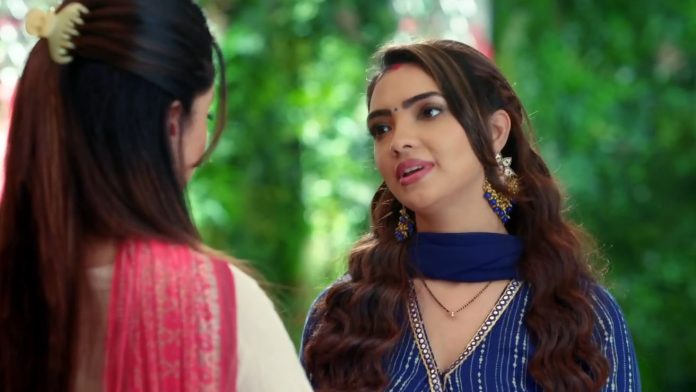 Kumkum Bhagya 12th October 2021 Written Update Honeymoon Rhea angrily blurts out the truth to Siddharth when he arrives home and meets her out of concern. She admits that she has a problem with their marriage. Siddharth is shocked by her rude behavior. He doesn’t realize why did she suddenly change after the marriage, when she had been so friendly and married him just to save his life. He tells her that he won’t ask her anything from now. He adds that she will send the divorce papers to her soon. Rhea is shocked to know about the divorce, by which she will be out of the Kohli house. She doesn’t want to get away from Ranbir.

Meanwhile, Rhea meets Aaliya to tell about Siddharth and her divorce. She explains that she can’t go on honeymoon with Siddharth, else she will get away from Ranbir. She wants to go close to Ranbir. Aaliya asks her to go with Siddharth and just act like a loving wife. She tells that Prachi and Ranbir are also going along with her on honeymoon, she has to create a situation such that Ranbir comes to her bedroom instead Siddharth. She asks Rhea to lay the trap for Ranbir and separate him from Prachi forever.

Rhea likes the idea. She asks Rhea to take an advantage of the situation. Rhea agrees to convince Siddharth for the honeymoon trip, only with a motive to win Ranbir. How will Rhea plot against Prachi this time? Will Siddharth make the mistake of believing Rhea again? What will Aaliya do against Pragya after failing so badly in the business? Keep reading.

Prachi tells Shaina that she isn’t pregnant. She gives Pallavi’s good news, that Pallavi is going to become the chairperson of Rajshri foundation. Rhea tells that she is very excited to know this. She wants Prachi to go. Ranbir comes to Prachi to talk. Rhea tells that he didn’t ask her welfare. He doesn’t care for her. She asks him to make her feel special. Ranbir tells that she is special, he will prove it to her. He gives the news that Siddharth is coming, he had called and just informed. Siddharth meets Rhea and asks her if she is feeling special. Ranbir tells Siddharth that he spoiled the surprise. He apologizes. Shaina introduces herself.

Ranbir and Prachi ask Shaina to give some privacy to Siddharth and Rhea. Shaina tells Rhea that Siddharth is really good. Ranbir and Prachi have a talk about Siddharth. Rhea asks Siddharth why did he come, she doesn’t need him. He asks her why did she marry him. She tells that she doesn’t want him around. He asks her clearly what does she want. She admits that she feels suffocated seeing her. Ranbir knew that Prachi has called Siddharth home. Prachi tells that Siddharth is mad for Rhea, but he felt that Rhea doesn’t need him. She knows that they both have fights, but they should not drag it.

She plays the love Guru for Rhea and Siddharth. She wants everything to get fine between them. Siddharth doesn’t think anything can get fine. He decides to end the relation with Rhea. He tells her that she should tolerate him until she gets the divorce papers. Rhea doesn’t want to leave him until she gets Siddharth. Ranbir thanks Prachi for helping Rhea and Siddharth. She asks him not to worry for Rhea, she will handle Rhea. He asks her not to get jealous of Rhea. She tells that Rhea is her sister, she has no jealousy.

On the other side, Tanu rebukes Aaliya on her failure and asks her to accept it. She tells that Gaurav will turn poor and Pragya will get more rich. She insults Aaliya by recalling the past. Aaliya is angered that she lost the tensed, because Tanu has double crossed her. She accuses Tanu. Tanu asks Aaliya why is she doubting her. Aaliya tells that Tanu would have checked the file and gave the details to Pragya. Tanu asks her why will she help Pragya. They both get into an argument, which get witnessed by Pragya.

Pragya laughs on their trust issues. She comments on their friendship which turned into fights so soon. She tells that she can’t see them fighting, they should turn friends again. She reveals that they have cheated themselves, their minds are corrupt, she knew that Aaliya will do something against her. She tells that she suspected Aaliya when she got hints, she had changed the quotation and won the tender. She knows how Aaliya and Tanu can harm her business. She has learnt to fight with corrupt people. She leaves them with a warning to get them jailed. She shows her ruthless side. She threatens to get them punished.

Pallavi agrees to make two bookings for them. Ranbir gets happy. Rhea doesn’t want to go with Siddharth. She vents anger on him. He knows that there was nothing in the marriage. He tells that they shall break the marriage. Rhea feels upset that her plans always fail. She is angry that Pallavi said yes for Ranbir and Prachi’s honeymoon. Prachi tells Ranbir that Pallavi can’t refuse to Rajeshwari. She doesn’t want to go and disturb Siddharth and Rhea. Ranbir tells that they will not disturb them.

She tells that their relation and happiness don’t need any special place, they already have a good relation, but Siddharth and Rhea get personal space. She convinces him to get them go alone. She hugs Ranbir. Rhea calls Aaliya for a meet. They meet outside the house. Rhea tells her that she hates Siddharth, because she loves Ranbir. She tells the honeymoon trip plans suggested by Rajeshwari. Aaliya asks her to use the trip in her favor.

Reviewed Rating for Kumkum Bhagya 12th October 2021 Written Update Honeymoon: 3/5 This rating is solely based on the opinion of the writer. You may post your own take on the show in the comment section below.