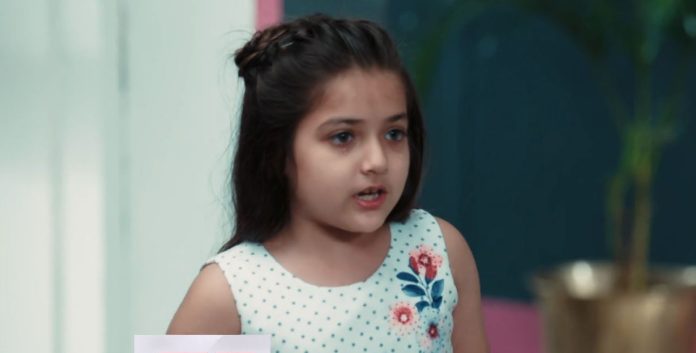 Yeh Hai Chahatein 13th October 2021 Update Anvi confession Everyone worries for injured Sharda. Saaransh says Sharda got hurt because of him. Prisha and Rudra try to wake up Sharda. Armaan asks Anvi why she is crying. Anvi apologizes to Armaan and says that she removed stone from under the car to hurt Saaransh, not Sharda. She asks Armaan will Sharda get alright. Armaan and Sanya get scared when Anvi says that she will reveal the truth to Prisha. Sanya tells Anvi that if she will tell the truth to anyone, then she will have to go Jail. Anvi says Prisha taught to never lie.

Sanya asks Anvi to forget what Prisha taught her. She scares Anvi saying that she has hurt Prisha’s mother for which she will get angry at her. Sanya says to Anvi that Armaan will handle the situation and she should come with her. Sanya takes Anvi away and Armaan pretends to care for Sharda. Everyone leaves with Sharda for the hospital. Armaan thinks his plan to kill Saaransh failed again as Sharda came in between. He thinks if Saaransh would have got killed, Rudra and Prisha would have got separated. He thinks to handle the situation now.

Sharad is taken to Operation Theatre. Prisha says Sharda was so happy with children after a long time. She tries to assure Rudra that nothing will happen to Sharda. Rudra says that Sharda is suffering so much in this age, he thinks to punish the criminal. Armaan reaches the hospital with the car owner. Rudra gets angry at the car owner and pulls his collar. Everyone stops him. The owner apologizes and explains that his car’s hand-brakes were not right, which is why he kept a stone under the car’s tyre. He further says he doesn’t know how his car moved on its own.

Rudra refuses to believe the car owner’s explanation and tries to hit him. Police reach the hospital. Prisha asks who called the police. Armaan replies he called the police to punish the car owner for his crime/mistake. Rudra asks the police to arrest the car owner and make him blurt out the truth. While getting arrested, the car owner says that someone must have removed the stone from under the car. Next Prisha is seen scolding Anvi. Anvi apologizes to Prisha and says she didn’t know Sharda will get this much injured. Prisha says anyhow Sharda got injured badly.

Prisha asks how she could do this. She refuses to forgive Anvi and leaves saying “I hate you Anvi, i will never talk or meet you”. Anvi wakes up scared, crying and shouting Prishma. Sanya comes to her and hugs her. She asks her what happened? Anvi replies that Prisha was scolding her. Sanya says to Anvi, she was dreaming. Armaan too goes to Anvi and tells her that he got the car owner arrested as he committed the real mistake.

Anvi says she was wrong actually. Sanya asks Anvi to forget that she removed the stone. Armaan and Sanya make Anvi sleep. Sanya asks Armaan what will happen if scared Anvi opens her mouth to reveal the truth in front of anyone. Armaan assures Sanya that nobody will get to know that Anvi committed the crime. The same night Sharda is brought out of the Operation Theatre. Doctor tells everyone that the next 24hrs will be very critical for Sharda. Prisha blames herself for inviting the whole family for a picnic and for Sharda’s present condition.

Rudra says he will punish the real criminal (car owner as por Rudra). He further asks Prisha to pray for Sharda. Rudra leaves for the police station. Digvijay comes with the inspector at the hospital. Rudra leaves with the inspector to check the resort’s CCTV footage to know what really happened? Footage stops after the car owner is shown keeping a stone under his car. Resort staff say something might have gone wrong with the camera, due to which the incident did not get recorded. Inspector tells Rudra someone present at the resort might want to take revenge from him.

Everyone including Rudra checks the corridor footage. Rudra thinks the culprit;s physique looks like that of Armaan’s. He returns to the hospital to talk to Prisha about his doubt on Armaan. Before he could talk to Prisha, Armaan comes there and Prisha thanks him for giving blood to Sharda. Rudra asks Armaan if he was in the hospital the whole time. Armaan and Digvijay try to make Rudra believe that they were in the hospital the whole time. They recall how they executed their plan and confused Rudra. Rudra gets into thinking how Armaan could be at two places at the same time.

In the next episode, Nurse will call the doctor seeing Sharda’s deteriorating condition. Digvijay will inform Armaan about it and will also say that Sharda may not survive. Armaan and Sanya will get scared thinking if Sharda dies it will become a murder case. Anvi will overhear them and ask them to take her to Prisha to reveal the truth. Anvi further will be seen committing her crime in front of Rudra and Prisha.

Reviewed Rating for Yeh Hai Chahatein 13th October 2021 Update Anvi confession: 3/5 This rating is solely based on the opinion of the writer. You may post your own take on the show in the comment section below.