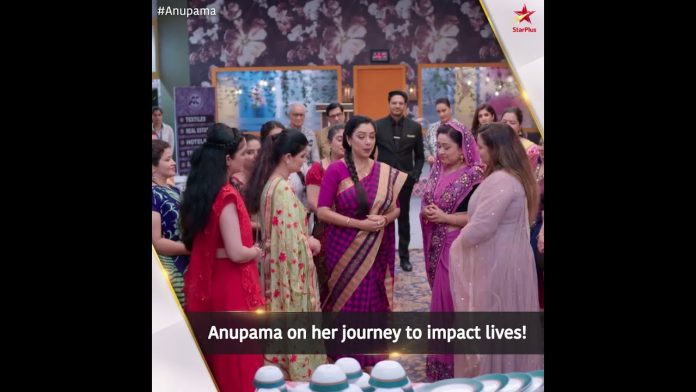 Anupama 15th October 2021 Written Update Anuj Anu amazing dance Anuj and Anupama discuss work. Anuj gets jealous of Vanraj, when he finds Pakhi getting Vanraj along to surprise Anupama. Pakhi takes Anupama and Nandini along. Anuj lets Anupama go with her family. Vanraj apologizes to Anupama for coming at that time. Devika asks Anuj not to let Anupama go away from him. Vanraj and Kavya have decided to support Anupama. Kavya is surprised seeing Vanraj supporting Anupama suddenly. He has changed his behavior for Pakhi’s sake.

His family is his weakness. He can do anything for his family. He controls himself just to maintain peace in the family. Kavya has a reason to be good towards Anupama. Kavya tells that she doesn’t want any problem in her job, she wants to be in Anuj’s good books. Leela gets complains from the neighbors about Anupama’s women empowerment trend. Leela is threatened by the neighbor women. She gets a chance to tell Anupama that she isn’t doing right. Vanraj and Kavya surprisingly oppose Leela. Vanraj will soon lose his patience and react angrily, like always. Vanraj’s angry reaction will be a surprise element.

Anuj grows strong feelings for Anupama, but still stays in his limits. He doesn’t want Anupama to judge him over his feelings. Anupama tries to bridge the distance between Samar and Vanraj. She tells that she will share Samar’s problem with Vanraj. She knows Vanraj will do anything possible to protect Samar. She believes Vanraj is a good father. Anuj and Anupama will be seen performing on Dil bole Hadippa song, while encouraging the participants in the cooking competition. GK and Hasmukh also shake a leg with them.

The dance twist comes in the competition to bring light moments in the tensed moment. They celebrate happily. Anuj and Anupama are the judges. They motivate the women for giving their best. Anupama asks the women to break their boundaries and believe in themselves. Anupama sets an example for the women. She teaches them to become independent and fly high. She tells that she has also come to her Sasural with many dreams in her eyes, but her dreams fell down the eyes in the form of tears, she lost herself and just the family existed for her, the house belonged to her in-laws, just the kitchen was left for her. She shares her journey with them. The women clap for Anupama, hearing her inspiring story. Anuj loves Anupama even more, after hearing about her hardships.

At night, Vanraj and Anupama collide with each other in the kitchen. Vanraj asks her what she and Samar are hiding from him. Anupama leaves requesting Vanraj to support Samar and Nandini without any questions like a father, whenever they will need him or ask for help. The same night, Anuj recalls whatever Devika advised him to keep Anupama protected and happy. Anuj tries to forget Devika’s advice thinking it to be wrong. Next morning, the weather starts deteriorating, Anupama worries about competition thinking she kept it in open surroundings, she prays to god. Anuj calls Anupama and tells her something.

Next morning, Anupama is seen leaving for the office recalling all household works she did. Two women from the neighbourhood come to Shah house shouting Anupama’s name. Anupama greets them, but the women ask her to keep her greetings to herself. Baa too comes there and asks the women in what way they are talking to Anupama. She asks the women to talk to Anupama with respect. One of the women says that there are fights happening in her house due to Anupama. They accuse Anupama of provoking their daughter-in-laws for the cooking competition as well as job.

Anupama defends herself saying that other women participated in the competition seeing the advertisement. Woman shouts saying their daughter-in-laws want to fly/succeed just like her. Anupama asks what’s bad about this. The Woman replies to Anupama, that a woman should live for her family not for herself. Another woman asks Anupama to send her daughter-in-law back home by disqualifying her. Anupama asks the women if they would have said the same if their son would have been participating in the competition. Both women warn Baa to control Anupama, otherwise society/colony people would not let them live peacefully.

Both women leave from the Shah house, and Baa tells Anupama that those women were right. She further asks Anupama to disqualify those women’s daughter-in-laws. Anupama refuses to do so. Vanraj and Kavya come from behind and support Anupama. They ask Baa to let Anupama do what she wants to. Kavya wishes “All the best” to Anupama. Baa doesn’t give her blessings to Anupama. Kavya asks Baa to relax. Vanraj tells Baa that he doesn’t want any tension or fights in his house. He also says to Baa that till Anuj is maintaining his limits and both Anupama and Kavya are working with him is fine with him. He further tells Baa if his children are happy with it, he is happy too. Baa replies that she is not okay with it.

Weather again starts deteriorating and Baa says its good, now she will see how Anupama saves her competition which is kept in outdoor surroundings. Anupama is seen happy seeing the cooking competition held in Anupama’s dance academy. Anuj and Anupama say competition is being held on the decided date because of Bapuji. Anuj says to Anupama that he hopes vanraj doesn’t create any trouble seeing all the arrangements. Anupama says Bapuji told he will handle Vanraj. Anuj thinks he will not let anything or anyone break Anupama’s heart.

Anupama discusses with Anuj how a housewife/homemaker couldn’t find even a half day for herself. She also discusses with Anuj that the women participants may have heard a lot of taunts/scoldings and may have made sacrifices to reach the competition. She further says that it’s good they shifted the competition to the dance academy, otherwise these women’s sacrifices would have gone to waste.

Anuj tells Anupama that he understands those women’s situation. He also informs Anupama that his team made arrangements to bring those women to the new venue of the competition. Baa gets angry on knowing that Bapuji allowed to conduct Anupama’s cooking competition in the dance academy. Bapuji shuts her down saying it’s his choice to help someone or not. Vanraj shows no problem with Bapuji’s decision. He warns everyone to not create any drama in house or in the competition. Angry Baa says Anuj entered their factory (Karkhana), soon he will enter their house too. Samar gives his first payment from the event to Bapuji. Bapuji and everyone feels proud of him. Bapuji praises Samar, while Baa asks how he got so much payment for dancing in just one event.

Kavya tells Baa that people get high payment of this type for performing in corporate events. Unknowingly, she makes Vanraj feel jealous by praising Anuj and his company. Samar says he is thankful to Anuj that he got so much exposure and chance to perform in other events too. He further says that from here, he will try to succeed on his own hard work just like Anupama. Vanraj wishes Samar “All the best”. Samar thanks Vanraj and informs everyone that Anuj gave him a unique idea to dance with Anupama in the next event. Vanraj asks Samar to inform the family about the next event date, they too will watch them perform. Kavya thinks Vanraj may be feeling angry from inside.

On the other hand, Anupama worries seeing that only two women arrived for the competition. Devika and Anuj ask her to relax and wait for sometime. Anuj tries to calm Anupama and ask her to have patience. Anupama recalls her past. Anupama gets happy seeing many other women entering the competition venue. Anuj calls Anupama a rockstar. Anupama welcomes and greets the female participants. On the other side, Samar gets emotional and scared after reading Nandini’s letter saying that she is returning to US. Nandini also wrote that Baa and Vanraj will not be able to understand her and Rohan’s past. She further wrote that she cannot put his (Samar’s) life in danger.

Kinjal and Bapuji too reach the competition and Bapuji feels proud of Anupama. Anupama feels happy seeing someone from her family. Participants call Anupama her inspiration and thanks her for giving them the strength to do something for themselves. Anupama gets emotional with all this. She tries motivating the participants by telling them her struggling life story. Anupama explains the participants to do at least something for themselves. She further asks them to prove themselves by working hard.

In the next episode, Samar will show Nandini’s letter to Anuj and Anupama. He will leave with Anuj to stop Nandini. Anupama on the other hand will tell Vanraj everything. Vanraj will refuse to help Samar saying that the latter doesn’t need him. He will further say that Samar gave his father’s place to Anuj and took his help. Samar and Anuj will be seen shocked witnessing someone injured by an accident.

Reviewed Rating for Anupama 15th October 2021 Written Update Anuj Anu amazing dance: 5/5 This rating is solely based on the opinion of the writer. You may post your own take on the show in the comment section below.