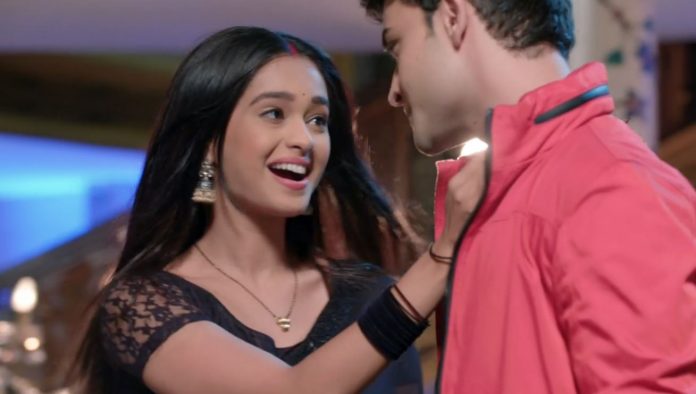 On the other hand, Aaliya is angry on Tanu. Tanu confronts her for staying connected with Rhea, Pragya’s daughter. She asks Aaliya not to keep terms with Rhea. Aaliya tells that she loves Rhea as her daughter, she will keep a relation with Rhea always, Rhea needs her, Rhea can never be a price for supporting Tanu. She tells that Rhea’s situation is like her, she will definitely help her. They both get into a verbal brawl. Tanu tells that love is love. She doesn’t want Aaliya to lecture her on love, because they know love is madness.

Rhea tells Siddharth that she can find her own way. She gets distant from him. She waits for Ranbir. Siddharth apologizes to her. He tells her that its his mistake. Rhea asks him not to irritate her. She asks him to call Ranbir and Rhea, and get them for dinner. Siddharth calls Ranbir. Prachi and Ranbir reach the restaurant. Rhea goes to welcome Ranbir. She hugs Prachi, just to hug Ranbir next. Siddharth finds it really odd. Prachi goes to meet Siddharth. Rhea acts over-friendly. Prachi tells that she got late because of Ranbir.

Ranbir and Prachi hold hands and romance. They ask Siddharth and Rhea to sit together, holding hands. Rhea angrily asks Rhea how can he say this, she can’t hold anyone’s hand, he may feel bad. Prachi asks Rhea not to joke and scare Ranbir. Ranbir tells that he was really tensed hearing Rhea. He kisses Prachi and reminds her that they are on their honeymoon. They enjoy their time. Rhea hurts herself. Ranbir sings for Prachi’s sake, on her request. They perform beautifully, leaving Rhea mad. Siddharth finds Rhea leaving.

Aaliya feels nobody needs her, but just Rhea needs her. She is glad that she matters a lot to Rhea. She also loves Rhea equally. Rhea gets Aaliya’s call. She tells that she is going mad seeing Ranbir and Prachi’s romance. She admits her plan is failing. She tells that Prachi doesn’t leave Ranbir for a second. Aaliya asks Rhea to work out her plans. Rhea asks her to give an idea to get rid of Prachi. She feels Ranbir has gone mad for Prachi. Rhea tells that she wanted Ranbir to get attracted towards her. Aaliya tells that attraction and wooing will just waste her time, he won’t come close to her this way.

She asks her to get Ranbir to the room and get close to him. Rhea tells that he won’t come to the room if he doesn’t see her. Aaliya asks her to get him drunk and take him to her room. She tells the plan. Rhea understands what she has to do. She bribes a waiter to spike Ranbir’s drinks. Ranbir and Prachi tell Rhea that they performed well, it was their love that impressed everyone. Ranbir feels hungry. Rhea gets Ranbir’s drink spiked. Ranbir consumes the drink. Rhea succeeds to take Ranbir to her room, and create a misunderstanding in Prachi’s mind. Keep reading.

Reviewed Rating for Kumkum Bhagya 15th October 2021 Written Update Pranbir at best: 3/5 This rating is solely based on the opinion of the writer. You may post your own take on the show in the comment section below.