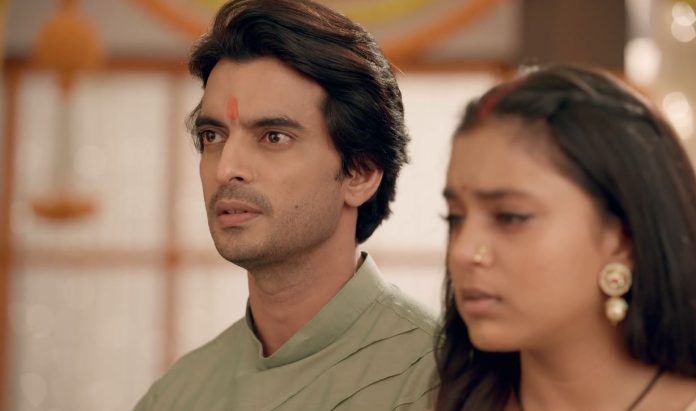 Imlie 18th October 2021 Written Update Surprise Visitor Aparna and Radha are seen welcoming the guests for the navratri pooja. Nani eyes the prasad kept for bhog. Harish and Committee members praise the preparations done by Imlie for the navratri pooja. Imlie asks them not to thank her. She tells everyone that Rupi will sing a bhajan for everyone. She calls Rupi the superstar of the colony. Rupi sings the “Om Jai Jagdish” bhajan in her melodious voice. Everyone feels good. Radha asks Harish how did Rupi sing after a long time. Nishant indirectly explains to them that Imlie motivated Rupi to sing after a long time.

Radha and Harish get emotional seeing Rupi sing after a long time. They tell Imlie that she gave them a very sweet gift. Harish blesses Imlie to always be happy. Imlie asks them to stop being emotional as it’s time for the couples to perform aarti. Nani asks what is couple, Imlie explains that couple means jodi. Sundar asks Nani if he has no partner what should he do. Nandi tells him he will soon find a partner for himself. Firstly, Radha and Harish perform the pooja, other guests couples too perform the aarti. Malini thinks that she will too perform the aarti with her right partner like others.

Aparna asks Aditya to perform aarti. He asks Imlie to come with him. Malini follows them. Imlie in between gets stopped by guests. Malini’s saree gets stuck in the decoration. Both Imlie and Malini try to reach Aditya, defeating their destruction. Imlie reaches Aditya on time and performs Devi Maa’s aarti. This angers Malini. Nani asks not to eye Imlie and Aditya’s jodi. She asks Malini to pray to God to forgive her for her misdeeds. Malini asks Nani to pray for herself. Nani doesn’t let Malini disturb Imlie and Aditya. She asks Malini to perform pooja with her as both of them are alone.

Malini makes Nani leave her and thinks she will not let Imlie win. Someone lits the decoration curtains to create fire all over the place. Everyone wonders where the smoke is coming from. Aditya sends Nishant and Imlie to check where the fire is coming from and if the elders are fine or not. Guests panic and run here and there. Malini coughs due to smoke and Aditya asks her to go to her room. On the other side, Rupi faints due to smoke. Imlie runs to save Rupi but gets pushed by someone in the way. The person who pushed Imlie takes Rupi in his arms. This shocks Tripathis. They get more shocked seeing the person who saved Rupi.

Rupi gets conscious and gets shocked to see the person who saved her. He makes Rupi stand on her feet. Unaware of the person’s identity Imlie thanks the person for saving Rupi. Aparna asks Imlie to not say anything now. Imlie wonders why? The person asks Rupi if she is fine? Nishant gets angry and tells the person that he has lost his right to take Rupi’s name. The person says he came to apologize to everyone. Imlie asks everyone why they are talking rudely with the person who saved Rupi’s life? Harish says this person is saving Rupi from fire after he lit fire in Rupi’s life in the past.

Imlie asks who is he? Crying Rupi tells he is her Pranav. This shocks Imlie and Nani. Imlie gets angry at Pranav. She asks him why he returned after ruining Rupi’s life and hurting her. She asks him to get out of her house. Parnav asks Rupi to let him apologize once. He tells Rupi if she doesn’t find his words valid, she can throw him out. Pranav says he wants to correct everything. Imlie says to Pranav that he is lying. She also says if she is not able to believe his words, how will Rupi believe? She asks Pranav how he realized his mistake after a long time? Malini asks Imlie to not interfere between Rupi and Pranav.

Imlie tells Malini she can’t be quiet as she stopped Rupi from crying a lot of times. She further tells that she has seen Rupi feeling alone even after living with her family. Imlie says she saw Rupi’s pain of feeling lonely. She asks Pranav to take prasad and leave. Malini asks Imlie to shut up. She asks Imlie is it her hobby to talk between husband-wife and increase their problems. She asks Imlie can’t she see people happy in their married life. Aditya asks Malini to let Imlie talk as she (Imlie) every time solved people’s problems not increased them. He also tells Imlie’s decision never went wrong.

Pranav tells Imlie that she doesn’t know anything about his and Rupali’s relationship. Aditya tells Pranav that Imlie is wife and knows Rupi more than him. Pranav begs Rupi to give him one chance. Rupi runs away from there. Harish asks Pranav to leave as everyone in this house hates him. Pranav gets a call and feels tense. Imlie sees him tense with the coming call. In the next episode, Pranav will be seen talking to the minister on whom Aditya did a sting operation. Minister will get angry at Pranav on knowing that Pranav didn’t get the proof that Aditya recorded against him. Pranav will assure the minister that he will find the proof soon as he has less time and it’s important for him. He will get shocked when Imlie from behind will ask him what’s important for him? Pranav is tensed to answer her. Keep reading.

Reviewed Rating for Imlie 18th October 2021 Written Update Surprise Visitor: 3/5 This rating is solely based on the opinion of the writer. You may post your own take on the show in the comment section below.