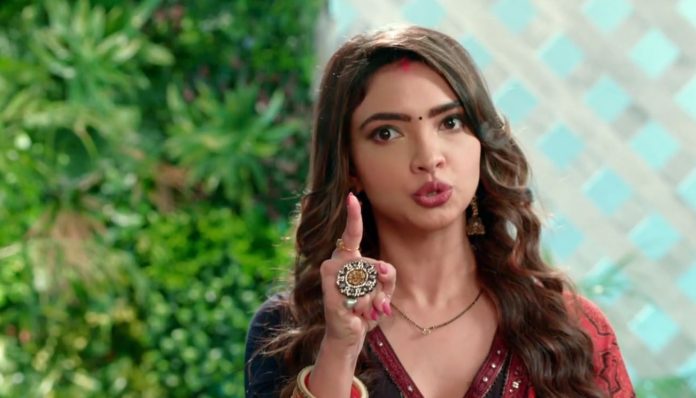 Kumkum Bhagya 19th October 2021 Written Update Rhea’s night truth Ranbir asks Prachi to give him a chance to clarify once. Prachi tells him that every relation needs faith to blossom, and today he has killed that faith in their marriage. Ranbir tells that he couldn’t see Rhea, he was in the room filled with darkness. Prachi asks him if he couldn’t see and feel also, he he couldn’t figure out Rhea by touch. She rebukes him for lying to her about his true love, that he can feel her by his closed eyes and heart. She feels she got befooled by him.

She taunts him for being a one-woman man. She feel cheated by Ranbir for his extra-marital affair. She also berates Rhea for giving the biggest shock of cheating. Rhea counts what Prachi did to her. Prachi and Rhea get into a bitter argument. Prachi tells Ranbir that faith is the first step to every relation, which he broke today. She declares that she will break their relation. She calls off her marriage with Ranbir.

She tells that their marriage is over from today, and forever. Ranbir is left in tears, while his family is worried. Rhea is the only one happy with Prachi’s decision. Aaliya signals Rhea that her plan worked, Pranbir is really separated. Rhea confesses that she has done everything just to exact revenge on Prachi, since the latter had snatched Ranbir from her on the marriage day. She can’t forgive Prachi for stealing her love.

She tells that if Ranbir got married to her that day, then he would have stayed committed to her all his life. She curses Prachi for coming into their lives and creating a total mess. Prachi rebukes Ranbir and Rhea for their secret affair. She doesn’t believe Ranbir and asks him to go to his love, Rhea. Rhea gets on cloud nine, after angering Prachi and getting to hear the things which she wanted to. It doesn’t make sense that Prachi lifts off her faith on Ranbir so soon. It surely has to be Rhea’s imagination scene.

Prachi and Ranbir can never get separated, because of their true love. Rhea would be receiving a big shocker to knowing that she had spent the night with Siddharth, after consuming the drink which was meant for someone else. Keep reading for a detailed update.

He laughs that Prachi was so scared for Ranbir. They see Rhea taking Ranbir to the other room. They go to get Ranbir out of the room. Prachi finds the darkness in the room. Prachi takes Ranbir with her to their room, while Siddharth goes to the room to wait for Rhea. Rhea doesn’t see Siddharth, and assumes him to be Ranbir. She gets intimate with him. Siddharth clears her misunderstanding. He goes to get his jacket. Rhea is shocked that she consummated her marriage with Siddharth.

She hates herself for the huge mistake. Rhea sheds tears while Siddharth goes away. She shouts that the night was meant to be spent with Ranbir, not Siddharth. She calls Aaliya to inform her that everything is over. She tells about the huge mistake. She tells that she was with Siddharth and confessed love to him, assuming that he is Ranbir. She gets angry that Siddharth got a romantic honeymoon as he wanted. Aaliya asks her how could she not know that its not Ranbir. Rhea tells that there was darkness in the room, she got mistaken. She vents anger on Aaliya.

Ranbir and Prachi have a romantic moment in the morning, while being happy with the night spent together. Their romance doesn’t end. Meanwhile, Pragya asks Shagun for Sushma’s bag. Shagun tells that its in Aaliya’s room. She goes to Aaliya’s room. She gets to see Gaurav’s messages on Aaliya’s phone. She recalls that Abhi has assured her that Aaliya will not have any connection with Gaurav. Pragya believes Abhi, but not Aaliya. She doesn’t think Aaliya is scared of Abhi, she always does what she wants, she is habitual to disobey him. She doesn’t want him to trust Aaliya and Tanu.

She thinks Abhi still has a misunderstanding about her in his heart. She wants to handle Aaliya herself. She decides to solve her problems herself. Gaurav meets Aaliya. Abhi checks Gaurav’s missed calls on Aaliya’s phone. He wants to know the reason for this desperation. Aaliya has lied to Abhi, and went to meet Gaurav. Aaliya and Tanu argue with Gaurav. He feels he is stupid to believe them and invite problems for himself. He tells that he has accused Pragya for molestation, he didn’t achieve anything, but Tanu has taken an advantage from the situation. He adds that they aren’t profitable for him.

They tell that they made him a winner in the case. They blame each other. Tanu asks him not to contact them again. Gaurav tells them that he has a plan to share. Rhea gets to see Ranbir and Prachi happy. She angrily tells them that she wants to go home. Rhea hates the sight of Siddharth. Prachi teases Siddharth about Rhea. Rhea fumes in anger. Keep reading.

Reviewed Rating for Kumkum Bhagya 19th October 2021 Written Update Rhea’s night truth: 3/5 This rating is solely based on the opinion of the writer. You may post your own take on the show in the comment section below.