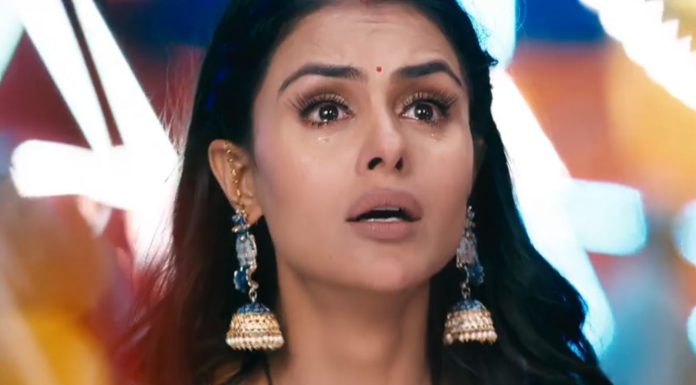 Udaariyaan 19th October 2021 Written Update Major twist Jass never looked back at Tejo after fleeing from her life. He wanted to escape from the police, and never thought of Tejo. Jasmin bribes him and employs him to ruin Tejo’s life. She wants Jass to claim his rights on his legal wife Tejo. Jass forces himself on Tejo. Jass tells Tejo that he has the only right on her beauty and charm. He wants her to stay as his wife. Tejo begs him to leave her. She thinks he has lost his mind.

Tejo’s life faces a big trouble once again. Jass keeps his demands that she explains their valid marriage to her family and comes back to him. He keeps this condition for her freedom. Tejo doesn’t want to acknowledge their marriage, remembering his fraud. She tells him that she will never accept their marriage.

Jass threatens her to take her away without her consent, if she dares cheats him for Fateh. Fateh looks for Tejo and meets the person who had found her phone. Fateh learns about her last location and goes behind the fair area, where Jass is torturing Tejo. Fateh is shocked to the core to find Tejo injured, and getting forced by Jass. He can’t believe that Jass is back. Fateh screams in rage on seeing Jass. How will Fateh save Tejo from Jass? When will Jasmin and her evil plans get exposed in front of Fateh? Will Tejo learn Jasmin’s involvement in bringing back her past, Jass? Keep reading.

Earlier in the show, Tejo boldly fights Jass. Tejo injures her arm to stop her daringness. Tejo lies in pain and weeps. Jass tells Tejo that she is his wife, she belongs to him. She replies that she isn’t his wife now. He tells that he has a right on her, he is her husband, he will not let her go back to Fateh. He adds that he will take her along and keep her like a queen in his palace. She calls him mad. He tells that Fateh can’t become between them. He adds that their marriage was legal, he has a proof to claim her as his wife. He shows the marriage certificate. He shocks her stating that their marriage is still valid, she is his wife, not of Fateh. Jass kidnaps Tejo.

Jass tells Tejo that he can kidnap her right away and take her with him as his wife, but he will still give her a day’s time to go home and tell the family about their marriage. He threatens to come home and drag her with him if she dares cheats him. Fateh comes there looking for her. He hears Tejo crying. He calls Tejo. Jass hears his voice and runs away from there. Fateh is shocked to see her wounded. He sees Jass running away. He asks Amrik to run after the person and find out who is he. He asks Tejo who was he.

Tejo replies that Jass is back. Amrik runs after Jass to stop him. Jass throws the sand in his eyes and flees. Simran and Mahi find Tejo injured. Amrik tells Fateh that the man ran away. Fateh tells them that he was Jass, who has injured Tejo. Fateh hugs Tejo with much care and affection. He consoles her and takes her home. The Virk family sympathizes with Tejo, knowing Jass has come back. Jasmin finds the silence around and rejoices that she expected the same. Gurpreet asks Tejo to narrate the incident to them.

Tejo shivers in fear because of Jass. Khushbeer asks Tejo why did Jass come back. He wants to know his motives. Simran tells that Jass left Tejo after marriage. Fateh tells that it wasn’t any marriage, Jass is a fraud. He wants to teach a lesson to Jass. Jasmin scares Tejo that Jass can attack her again. Tejo has the marriage certificate in her hand, given by Jass. She tells them that Jass has given it to her to claim their marriage. Fateh checks the marriage certificate. Jasmin plays this game. Khushbeer summons Rupy to know about the marriage registration.

He asks Rupy why didn’t he annul the marriage. Rupy tells that he had believed the lawyer, who said that the marriage is declared void. Khushbeer asks how could he neglect Tejo’s future in this manner. Rupy admits his big mistake. Rupy and Satti console Tejo. They ask Khushbeer to help them deal with the new problem. Khushbeer is also shaken within. He worries for Tejo. He wants to bring Tejo out of this problem. Fateh tells that he will not let Jass come close to Tejo. He takes a stand for Tejo, surprising both the families.

Khushbeer asks Tejo not to go out of the house until the matter gets solved. He calls a lawyer to discuss the case. Satti encourages Tejo, who is really strong. Tejo falls weak. Fateh finds her in pain. She recalls the pain Tejo has gone through. He feels worried for Tejo. Jasmin is all happy that she won to break down Tejo.

Tejo gets under trauma, while Simran and Candy pacify her. Rupy blames herself for the entire mess. He cries for his daughter. Khushbeer speaks to his lawyer to find a way to get Tejo divorced from Jass. The lawyer tells that Jass is Tejo’s official husband, they can’t take any legal step against him. Khushbeer assures Tejo that Jass can never harm her. Lawyer tells the family that Fateh and Tejo’s marriage is illegal until Tejo is married to Jass. He tells that Jass can create a new problem for them, Jass can file a legal case on them for the fraud. Jasmin gets happy.

Nimmo tells that Fateh’s life got complicated because of Sandhu girls. Tejo breaks down. Gurpreet tells her that they will find a way soon. Fateh is shocked by the lawyer’s revelation, just like Tejo. Jasmin reaches Tejo to pass insulting taunts to her. She accuses Tejo for hurting her a lot. She calls Tejo a second woman in Fateh’s life. She humiliates Tejo. She tells that Jass can take her Agnipariksha as well, because Tejo and Fateh had spent a night together. She laughs on Tejo’s miseries.

Tejo asks Jasmin to leave her alone. Jasmin tells that she now got a guarantee that she will become Fateh’s legal wife. Tejo cries on her fate, which is testing her every day. She had accepted everything in her life. She admits that she fell in love with Fateh and believed him, but the fate snatched him from her. She feels she lost Virk family as well. She wishes to die without Fateh. Stay tuned.

Reviewed Rating for Udaariyaan 19th October 2021 Written Update Major twist: 5/5 This rating is solely based on the opinion of the writer. You may post your own take on the show in the comment section below.