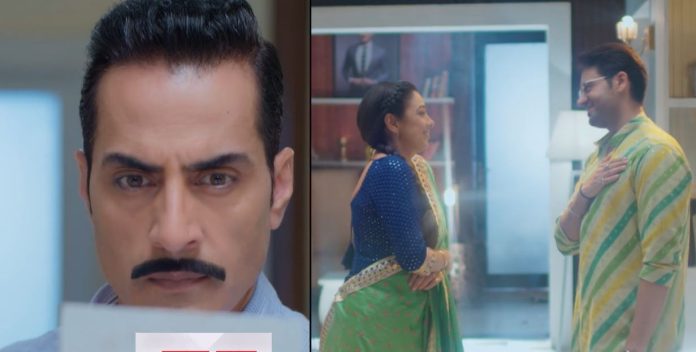 Anupama 19th October 2021 Written Update Dreamy romance Anuj tells Samar that his deed won’t help Nandini, but just satisfy his ego. He tells that Nandini can fight her battle on her own, Samar just had to go with her to the police station and support her to file the police complaint. He gets disappointed with Samar. He tells that the people forget the fight and just remember the reason when its a girl’s matter, the society has the same attitude towards women. He rebukes Samar for making this big mistake, when he knows his mother Anupama is fighting the society.

He tells that Anupama is a strong woman, even Nandini can fight the society. He asks Samar to think of Nandini, how hurt she will get when the society points on her character. He asks Samar to tell him if there is anything serious, if he has beaten Rohan brutally. Samar reveals that he had hit Rohan with a rod and left him there. Anuj is shocked to hear that. Anupama awaits Samar at home. Devika comes to meet Anuj. She finds a beautiful lahenga. Anuj tells her that he had ordered it for Anupama, knowing that he can’t give her the special lahenga.

Devika tells him that she will make the gift reach Anupama. She takes the lahenga for Anupama. She gifts it to her and asks her to wear it on the occasion. Anupama takes the gift. A thank you card for the order named to Anuj falls there. Anupama loves the lahenga. She tries it on Devika’s insistence. Vanraj happens to get the card. He grows furious. Vanraj imagines Anupama in the gifted lahenga, sharing a moment with Anuj. He thinks of Anuj and Anupama’s romance, where Anuj compliments her and holds his heart seeing her.

Earlier in the show, Anupama gets worried for Samar. Anupama feels something is wrong. Vanraj sends Kinjal and Paritosh to look for Samar. Anuj asks Samar to pick Anupama’s call. He stops Samar and Anupama receives a message from Samar’s number saying he went to see a friend who met with an accident. Shah’s feel relaxed thinking Samar is with a friend. Anuj tells Samar he didn’t hear his full advice “that one mistake cannot correct any other mistake”. He says to Samar he should have heard him fully. Anuj further explains to Samar that he just satisfied his ego. He also explains to Samar he should have just supported Nandini in fighting Rohan legally. He says due to his mistake Nandini may have to hear people’s taunts just like Anupama suffers.

Kinjal says a person who can do dandiya perfectly in even 90 years of his/her age is called Gujarati. Baa says a person who celebrates navratri and dussehra as life’s celebration is Gujarati. On the other side, Samar receives Rohan’s call in Anuj’s presence. Rohan asks Samar if his family is going to file a complaint against him in the police station or not. Samar says yes and tells Rohan that soon police will arrest him. Rohan laughs and warns Samar that he can too make him arrest on charges of attempt to his murder as he (Samar) left the rod with his fingerprints with Rohan. Rohan challenges Samar that he will attend the dandiya near his house. Samar threatens Rohan of his family’s anger.

Baa doesn’t accept food from Nandini. Shah’s discuss dandiya dance competition between couples. Pakhi says that this time the price for winning dandiya is 1,01,111rs. She asks Baa and Bapuji to win it. Baa indirectly taunts Anupama that there is no happiness left in the house. Kavya, Paritosh and Nandini that they can win the dandiya couple dance with their respective partners. Pakhi informs everyone that there are many prizes other than best couple like; best dressed couple, cute old couple and best child dancer. Kavya says that their family will surely win some prizes. Pakhi says thank god, Vanraj will participate this time as always remained busy in office in the past.

Anuj advises Samar to tell his family whatever he did with Rohan. Samar says to Anuj that he will tell everything to his family if he too comes for Dandiya in their colony. Baa again taunts Anupama saying she has no partner to play dandiya. Anupama says she is fine with seeing ravan dahan and celebrating festival with the family. She also says that she will click photographs of everyone. Anuj says he wants to keep a safe distance from the Shah family’s house. Kavya asks Vanraj to practice for Dandiya. Vanraj says first he has to go to the police station with Samar and Nandini. Baa taunts Nandini that they have to visit the police station during festival time because of Nandini.

Anupama says to Baa that problems doesn’t arrive seeing days and festivals. Nandini apologizes to Baa. Everyone wonders where Samar is? Samar tries convincing Anuj to come to shah house. He manipulates Anuj using Anupama’s name. Samar feels sorry for his deeds and thinks he just wants Rohan to not come in front of Nandini again. He also gets scared thinking if Nandini leaves him in Rohan’s fear. Anuj agrees and says he will come by informing Anupama. Anuj too feels scared for Anupama. Samar returns home and refuses to go to the police station. He doesn’t tell his family what he did with Rohan and makes excuses of festival time.

Vanraj agrees to Samar. He assures the family that the whole family will be with Nandini and Samar. Anupama fails to read Anuj’s message informing about his arrival. Anuj asks his security to be present as guests in the dandiya celebration. He asks his people to get information about Rohan. Anuj feels scared if anything goes wrong with Anupama due to his presence. He dreams about gifting designer lehenga to Anupama. It is a cute dream of him convincing angry Anupama. He also imagines Anupama in his bought lehenga. Anuj’s dream breaks and he starts doing romantic poetry. Devika comes there. She asks Anuj, if he bought this for Anupama?

Devika teases Anuj and says she will give it to Anupama. She makes Anuj blush saying she will send him Anupama’s pictures in his bought lehenga. Devika leaves with the lehenga and Anuj again starts his poetry. Anuj thinks Anupama will look good in his ordered lehenga. On the other side, Kinjal is seen helping Anupama in deciding outfit for her to wear during dandiya. Devika gives Anuj’s ordered lehenga to Anupama. Unaware Anupama likes it a lot. While changing the outfit, a card falls down from the lehenga saying it is a special order of Anuj Kapdia. Flying in the air, it reaches Vanraj, who gets angry reading it. He will hear Pakhi saying it’s a beautiful gifted lehenga.

In the next episode, Anupama will welcome Anuj to the dandiya celebration. She will also say to Anuj that she will not let him return in this festival time. Anupama will say that Rohan will not trouble Nandini and Samar in front of family members. Rohan will be seen trying to hit Anupama with a rod from behind.

Reviewed Rating for Anupama 19th October 2021 Written Update Dreamy romance: 5/5 This rating is solely based on the opinion of the writer. You may post your own take on the show in the comment section below.