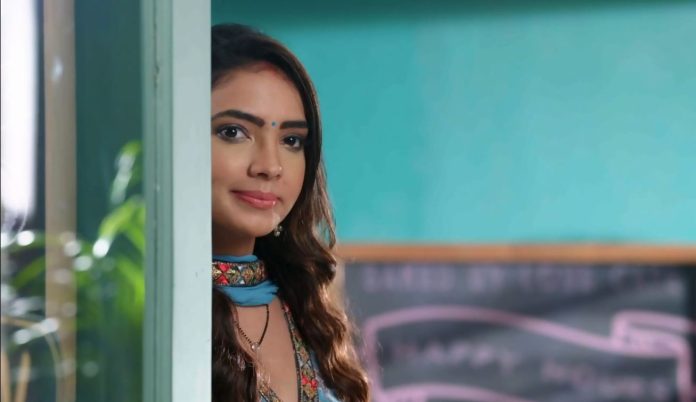 Kumkum Bhagya 21st October 2021 Written Update Sick Rhea Rhea fills doubt in Ranbir’s mind against Prachi. She tells that a guy and a girl can never be friends. Prachi and Siddharth meet at the cafe. They share the project updates. Prachi waits for Ranbir. She tells that she will go and look for Ranbir. Siddharth asks her to sit back and go late. Rhea happens to come there. She sees Siddharth holding Prachi’s hand.

She gets a chance to click their picture to show their friendship in a wrong way. She has filth in her mind. She tells that she just had doubt on them, but they both are proving her doubt true by making it a reality. She tells that she was just making a story in front of Ranbir, but they are really writing a romantic story. Rhea clicks their picture before going to them.

On the other hand, Pragya tells Abhi that those people who are really nice often end up getting hurt by others, who are selfish and greedy. She tells that wrong happens with good people. She asks Abhi why is he such a nice man. Abhi tells her that their relation is also at such a point which is suffering because of his goodness. He tells that their relationship is hollow. He blames himself for failing it. He feels he has made many mistakes, that’s why their relationship is such hollow, that it exists but lacks emotions. Pragya understands how hurt he is, by hearing his pain. What will Pragya do to bring her relation back on track? Keep reading.

Prachi slips in his arms because of his careless behavior. He apologizes for dropping the water on the floor. He asks her to twist his ears. She laughs on his kiddishness. She acts angry. He asks her to get more angry and look more lovely. They have cute Pranbir moments. She tells that she will not get angry now. He tests her patience and tries to anger her. She tells that she will keep her calm. He tells that his life’s problems got cut down to half by her calm attitude. Meanwhile, Abhi arrives home. He asks Pragya not to question him about his outing. She asks him why did he go to meet Gaurav without informing her.

He asks her not to spy on him. She tells that Gaurav has threatened her after informing about the visit. He tells that he will go and threaten Gaurav. She asks him not to do anything against Gaurav, who is a goon in a businessman’s getup. She asks the reason for his visit. He tells that he had seen Gaurav’s missed calls on Aaliya’s phone, he had gone there to check if Aaliya is meeting him, he was irritated by Aaliya’s lie and went out of concern. She tells that Aaliya isn’t a little kid, she can take care of herself.

He asks Pragya to think of their relation, it has turned hollow, they speak something and feel something else. He adds that he talks sensible when he is in his senses, he doesn’t want to become emotional. He decides to find peace his way. He doesn’t drink for Pragya’s sake. Pragya gets pleased. On the other side, Rhea enters her room. She finds Siddharth smiling and thinking of their night. He asks Rhea where is she going. Rhea tells that she is going out to sleep. He asks her the reason for her odd behavior. He wants her to stop irritating him. She argues with him. She tells that he is out of his mind.

He asks her why did she change after coming home, when she was loving him so much in Manali. She shouts on him that he stopped her. He tells that she is going out to sleep, which is wrong. She asks him not to stop her, he has no rights. He stops her from crossing limits. She tells that she is a bad wife, but he is right. He feels its useless to talk to her. She asks him to finish the argument. She yells so much that he leaves the room. She gets happy that her plan to throw him out out of the room has worked. She sleeps in the room. Subhash calls Pragya to seek her permissions for the office renovations.

He asks her to check in the morning and inform him. She tells that she has some work in the morning. He replies that it will get too late. Abhi asks Pragya not to refuse, he will go on her behalf and inform her. Pragya tells Subhash that her husband will come to the office and check the plans. She finds Abhi struggling to sleep without his drinks. She permits him to sleep on the bed and find some peace. Abhi tells that he really wanted to sleep on the bed. Pragya too occupies the bed, making Abhi dreamy. Pragya tells that she is sleeping on her bed, but not with him. He asks her how is it different. She asks him not to get scared of her. She makes a line of control. He asks her if anyone tries to cross the border.

She asks him to feel safe by sleeping on the sofa. He tells that he is okay with it. Pragya smiles seeing him and feels the same love again. Abhi finds her giving a sweet smile. They have a very cute moment. Later, Prachi scolds Siddharth and asks him to have food well, else he can’t focus on work. She talks to him as a good friend, while Rhea gets an idea to link Prachi and Siddharth. Rhea asks Prachi if she knows Siddharth well. Ranbir tells that Prachi knows Siddharth really well. Rhea asks since when.

Siddharth tells that Prachi knows him since two years, since the time she got married to Ranbir, he used to visit them at their rented house. Prachi tells that Siddharth was her only Sasural, he used to tell her everything about the Kohli family. Siddharth tells that he had offered a job to Prachi after seeing her skills. Ranbir tells that they both troubled him a lot, they always stayed together for their work, Siddharth was a problem in his love story. He adds that he had to throw out Siddharth from his house. Ranbir asks Prachi and Siddharth to leave for their work. Rhea gets happy to find a good opportunity.

Abhi and Pragya get ready to leave for their work. Abhi tells that Mitali really made tasty breakfast. Abhi asks Pragya to come fast, even he has to go to the office to meet Subhash. Aaliya overhears their talks. Pragya asks Abhi to go to the office, she will leave after some time. Gaurav calls Aaliya to discuss something important. She doesn’t answer the call in front of Abhi. Stay tuned.

Reviewed Rating for Kumkum Bhagya 21st October 2021 Written Update Sick Rhea: 3/5 This rating is solely based on the opinion of the writer. You may post your own take on the show in the comment section below.