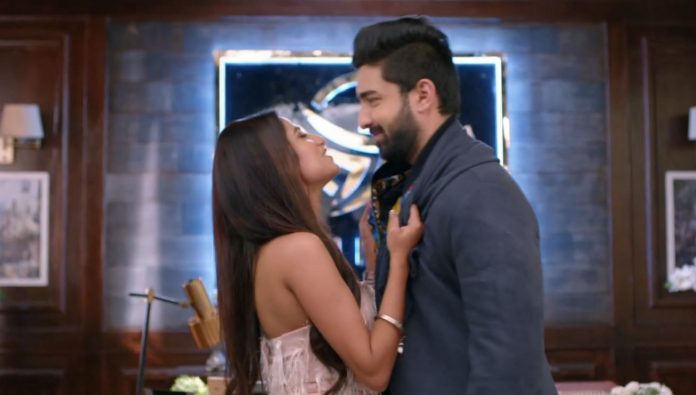 Bhagya Lakshmi 22nd October 2021 Written Update Rishi cheats Lakshmi Lakshmi goes to check but does not find anyone behind the curtain. Lakshmi starts cleaning the mess when Rishi and Malishka go and hide under the table. Lakshmi’s phone falls and goes under the table which scares the duo. Sonia is searching for car keys in Aayush’s room and scares him. She tells him that she wants to go for a long drive. Aayush warns Sonia from scratching his car and is about to give the keys but doesnt give them. Sonia blackmails Aayush and he gives her the key. Aahana is hiding behind the curtain and listens to the whole conversation.

She teases Aayush with Shalu’s name but promises to not tell anyone. Lakshmi searches her phone under the table and gets it. Rishi and Malishka are hiding behind the table cloth. Lakshmi picks up her phone and goes away. Malishka is angry that they have to meet secretly because of Lakshmi and Rishi says that he doesnt have any other option in life. Malishka says Rishi to make her feel that he is not going far from her and he says that he is only hers. Malishka says that she needs to see and mom and decides to leave. Rishi says that she is the winner and shouldn’t be scared of anything.

Virendra informs Lakshmi that they donate food to the needy on the next day of his and Neelam’s anniversary. Lakshmi insists to come along but Virendra says that only elders go there. Lakshmi gives breakfast to Aayush and he tells her not to inform Rishi that he got up late. Lakshmi takes his side. Rishi doesnt want to have breakfast as he is busy with work and Lakshmi feeds him. Malishka calls Rishi and asks him to say I love you for 5 times. Rishi makes some excuse and tells I love you once and Malishka understands that he is with Lakshmi.

Malishka informs Rishi that she will meet him in the office. Lakshmi finds Rishi nervous and asks who called him and Rishi says that everything is fine. Rishi romantically goes towards Lakshmi but takes his pen and leaves. Lakshmi gets mixed feelings about Rishi. On one side she remembers her conversation with Gurucharan over Rishi cheating her and on another side, the lovely moments spent with Rishi. Aayush is sad that Rishi is having an affair with Malishka even after getting married to Lakshmi. Rishi asks Aayush to stop the car and gets out angrily. Aayush says that even though Rishi doesnt love Lakshmi but she loves him a lot. Rishi says she is with them only for a year and values her gestures for him but cannot fall in love with Lakshmi.

Rishi promises Aayush that he will take good care of Lakshmi and requests him to understand his situation. Rishi says that he only loves Malishka and warns Aayush to never bring this topic again. Aayush and Rishi sit in the car and go to the office. Aayush thinks that he does not have the need to be clear because he knows that Rishi loves Lakshmi and he should get clarity on this. Aayush is confident that Rishi doesnt love Malishka and decides it is high time now and he needs to make Rishi realize his love for Lakshmi. Aayush pledges to take matters into his hands and perform the task of clearing Rishi’s confusion. Aayush decides to make Rishi understand that he loves Lakshmi and that their marriage is a pure relationship and not a one year game.

A representative from a jewelry brand comes to meet Lakshmi and tells her that Rishi is supposed to come to inaugurate their shop in the afternoon and therefore she has come to personally give him a reminder. Lakshmi agrees to convey her message to Rishi. The girl asks Lakshmi to join Rishi in the inauguration ceremony if she doesnt have any prior commitments. Lakshmi says that she doesnt have any prior commitments but as Rishi will do the inauguration he will reach there. The girls informs Lakshmi that Rishi is a very famous name in fashion shows and judging panels and the invitation was sent to him 2 months back but at that time he was not married or else Lakshmi would also have been invited. She insists to Lakshmi that they will feel grateful if she comes as their showroom has both men and women collections.

Lastly, the girl says that as they are a newly married couple people will feel happy seeing them together. Lakshmi says that she did not speak about this with Rishi and the girl says that she will have a word with Rishi. The girl calls Rishi in front of Lakshmi and asks him to bring Lakshmi along with him. Rishi is very busy with office work and doesnt listen to her whole statement and agrees to bring along someone.

The girl says that Rishi gave her permission and he will bring Lakshmi along with him and that too on time. The girl again insists Lakshmi to come for the inauguration and she instantly agrees. Aayush asks Rishi if he really will go to inaugurate the showroom and Rishi says yes as it is Malishka’s uncle’s showroom and he knows about their relationship. Rishi says that he has to go also and fulfill family duties too.

Aayush tries to brainwash Rishi against Malishka but she suddenly comes out of the table and Aayush stops himself. Malishka hugs Rishi from behind and he gets shocked. Malishka informs Rishi that she had been hiding under the table for 10 minutes to surprise him and Rishi says that it was not a surprise but a shock. Aayush is embarrassed and goes aside but Rishi asks him how nicely he supported Malishka and managed to distract him. Rishi asks Aayush what was he trying to say but Aayush says that he has an important meeting and leaves. Rishi calls Malishka a naughty girl and she asks him to hug her and not behave like he saw some ghost Rishi calls her a female ghost and Malishka hugs Rishi. How will Rishi handle the situation when Lakshmi and Malishka both are at the same venue? Keep reading.

Reviewed Rating for Bhagya Lakshmi 22nd October 2021 Written Update Rishi cheats Lakshmi: 3/5 This rating is solely based on the opinion of the writer. You may post your own take on the show in the comment section below.