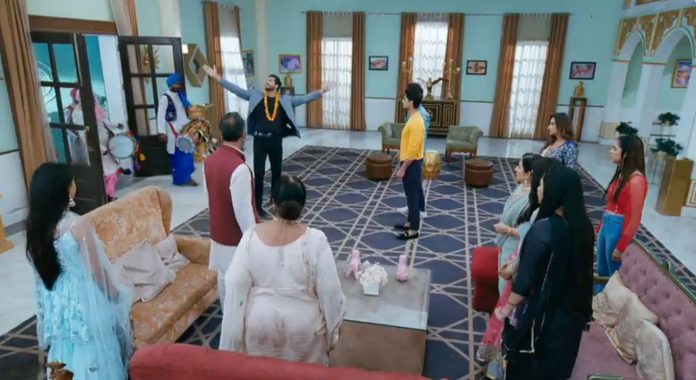 Udaariyaan 21st October 2021 Written Update Baraat twist Jass threatens Tejo once again. He tells her that he is giving her another day time until she talks to her family and agrees to come back to him. He asks her to leave the Virk family house and return to her parents’ house. He adds that if she stays in Virk family, then he will be compelled to get his baraat for his wife there, regardless of anyone’s sentiments. Jass talks filthy of Tejo and Fateh’s relation, as Jasmin told him to do so. Jass insults Tejo for living with a stranger as his wife, when she is married to someone else.

Tejo can’t tolerate any dirty talks about the relation which she regarded pure and true from her heart. Jass hurts her further and keeps his demands clearly before releasing her from the so-called torturing date. Tejo returns home in a shaken state again. She tells the Virk family how Jass has threatened her of the police and law. Fateh gets enraged that Jass had tricked Tejo to kidnap her. He realizes the danger gripping Tejo, but promises to protect her.

Amrik tells that Jass isn’t much daring to come to their house, he can just timepass by threatening Tejo. Fateh tells that if Jass makes a mistake to come to their house, they he shall break his legs and throw him out. Khushbeer is worried for Tejo’s future. He regards her a daughter, and knows her sacrifices. He wants Tejo to get freedom from evil Jass. The entire family and Fateh support Tejo.

They get a huge shock when Jass arrives home with his baraat. He makes an entry in Virk mansion, dancing on the dhol music. He also gets police along. Khushbeer, Fateh, Tejo and the family are shocked to see Jass’ daring move. Tejo feels more threatened when Jass complains about the Virk family to the police. Fateh loses his cool seeing the shameless fraud Jass. He takes a step to defend Tejo. Jasmin gets overjoyed seeing the drama and thinks Fateh will ultimately agree to marry her for relieving Tejo from the humiliation. Will Fateh agree to marry Jasmin by falling in her plan? Keep reading.

Jass threatens Tejo that he will not spare her family, her beloved Sandhu and Virk families, he will not spare anyone if she refuses to come with him. He wants her to obey him and come to live with him as his loving wife. He tells her that he can do anything, if she refuses to come with him, then she will see his worst side. Tejo gets scared when he mentions about the family. She doesn’t want him to put her family in danger. He tells that her family is her weakness, and he will make this his strength.

He tells her that he shall exploit her family if she stays back with Fateh. When she gets scared of his threatening, he laughs at her and gets more certain that his plan is working. He lets her go back to Virk family to inform them about his demand. Tejo returns home, while everyone is much worried for her absence. Jasmin wants Tejo to get more terrified. Tejo tells the family that she wasn’t going out, it was Jass who tricked her and made her leave the house. She tells that Jass had kidnapped her and took her away to threaten her. She tells how he threatened to ruin the family’s happiness and peace if she doesn’t go back to him. She doesn’t want to go to him. Khushbeer promises to protect his daughter.

Fateh too tells her that he will not spare Jass. He assures that he will stop Jass from reaching her. Gurpreet and entire family stays with Tejo. Tejo gives them Jass’ message that he is going to come home to take her, if she refuses to go, then he will create a big trouble for them. Virk family is ready to face Jass, but doesn’t want Tejo to go anywhere. The entire family stands with Tejo. Jasmin knows that they can’t help Tejo, because Jass has the law on his side. While the family doesn’t get Jass’ move, Jass plans to come to Virk house with band, baaja and baraat.

Jass discusses his plan with Jasmin. He tells her that he is the king, not a slave, he will rule with his trump card. He asks her to wait and watch what he does with Tejo. Jasmin reminds the deal that he has to take Tejo away from the house, and also from Fateh’s life. He assures her that he will take Tejo with him. Jasmin doesn’t care a bit about Tejo. Tejo gets too stressed by Jass’ words.

She wants to handle the situation herself. Fateh tells her that he wants to really help her, she can take it as his own need. Jasmin shares her plans with her friend Sweety. Fateh overhears her and angrily leaves. Jasmin gets scared to face him. She thinks if he heard anything. He feels helpless that he isn’t able to help Tejo. She asks him to marry her if he wants to help Tejo. She fools him again. He doesn’t listen to her.

She tries hard to convince him for the marriage. He asks her not to take Jass’ side. She fakes her concern for Tejo. Jass makes an entry with his baraat as he promised Tejo. He shocks the Virk family by bringing the police along. Jass irritates them to the core. They stay calm and try to know his motives. Jass clearly tells them that he has come to take his legally wedded wife Tejo. This enrages Fateh and his family. What will Tejo do now? Keep reading.

Reviewed Rating for Udaariyaan 21st October 2021 Written Update Baraat twist: 3/5 This rating is solely based on the opinion of the writer. You may post your own take on the show in the comment section below.