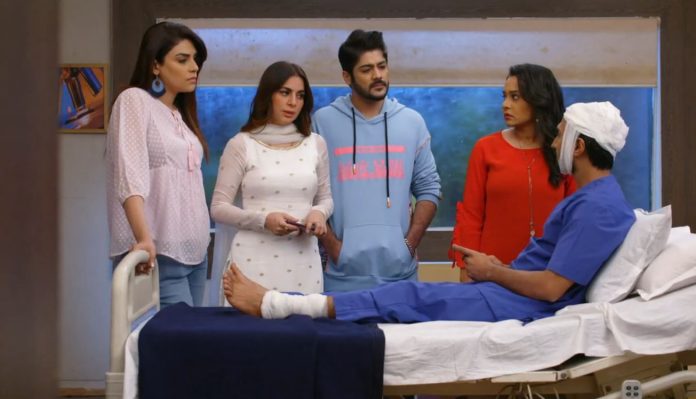 Kundali Bhagya 22nd October 2021 Written Update Preeta threatens Sandeep messages Prithvi to not come ahead, because there is someone spying on them. Preeta, Sameer and Shrishti try to find out who is Sandeep meeting. They want to find out the mastermind. Prithvi thinks to call Sandeep and ask him where is he hiding. Sandeep wants him to check the message. Prithvi realizes that he forgot his phone in the car. He goes back to the car. Sandeep is relieved that Prithvi left. Preeta goes out to see if anyone has come. Prithvi checks Sandeep’s message. Sandeep shouts to distract them. Prithvi thinks something is really wrong. He leaves from there to save himself. Sandeep runs from there.

She wants Rishabh not to worry for Mahesh and Rakhi. Mahesh tells that he wanted to see Rishabh once. Rishabh gets emotionally weak in front of Mahesh. He tells that he can’t act strong. He isn’t worried for himself that he is in the jail. He knows that Mahesh will get him out. He is worried for Mahesh’s health. He asks Mahesh to take care of himself. Mahesh promises that they will be together in their home soon.

Bani asks Rishabh to come back home, they all miss her. Prithvi arrives home, while Sherlyn drags him to her room for a talk. He asks her not to drag him this way, else he will get caught. He informs her that Preeta, Sameer and Shrishti were again trying to trap him. She asks him not to vent anger on her, if Luthras do anything against him. He tells her that she is leaving him frustrated, she is useless for him, unlike Kritika, who told her Preeta’s planning. He feels grateful to Kritika who revealed the entire plan and helped him. He reminds her that he got her married in Luthra house so that she helps him, but she isn’t helping him.

Preeta asks the nurse for Sandeep’s address. Nurse refuses to give any details. She informs that Sandeep is still there. Sandeep tells Sudeepa that Luthras were following him. She doesn’t think so. She tells that Prithvi is playing a double game with him. He replies that he is useful for Prithvi. She reminds that he didn’t get any money till now, Prithvi is the mastermind. Sandeep knows that Prithvi needs him a lot. She asks him to demand the money right away, else Prithvi will fool him. Nurse tells Preeta that Sandeep is still admitted in the hospital, he was discharged but got re-admitted some time back.

She asks Preeta to check Sandeep’s pain once, his doctor is out of reach. Preeta tells that she will be glad to help. She tells Sameer that they will help out Rishabh, she wants to prove Rishabh innocent, but along with a big motive, that’s to find the mastermind. She tells that if they miss to find the truth, then the mastermind will target Rishabh once again. She wants to end the problem from its roots. Furthermore, Rakhi regrets that she vented her anger on Preeta. She feels bad that she scolded Preeta when the latter was not at fault. She cries on her mistake. She apologizes that she made a big mistake.

Pihu finds Rakhi crying and asks the reason. Rakhi tells that she made a mistake by scolding Preeta. Pihu asks her to say sorry to God and never get angry on Preeta again. Rakhi thanks Pihu for her advice. She hugs Pihu. Preeta, Sameer and Shrishti meet Sandeep. Sandeep asks them to leave, else he will call the police. Preeta asks him to call the police right away, she also wants to talk to the police.

She tells that he is cheating them when his leg isn’t injured. She adds that she has seen him running on his same foot. Sandeep realizes that they were at the godown. Sudeepa asks them not to trouble the patient. Shrishti loses her cool. Sameer tells that they are double over-smart, they have an evidence against him.

Preeta asks Sandeep not to fool them, he is a fool himself. She tells that she knows that someone has asked him to blame Rishabh and send him to the jail. She asks him to tell the name of the mastermind. Sandeep denies it. Preeta shows him the video and threatens to get him arrested for the fraud. She tells that he has two options, either support them or go to the jail. What will Sandeep decide now? Will Preeta be able to know Prithvi’s name? Or will Rishabh’s jail track drag for another month? Keep reading.

Reviewed Rating for Kundali Bhagya 22nd October 2021 Written Update Preeta threatens: 3/5 This rating is solely based on the opinion of the writer. You may post your own take on the show in the comment section below.