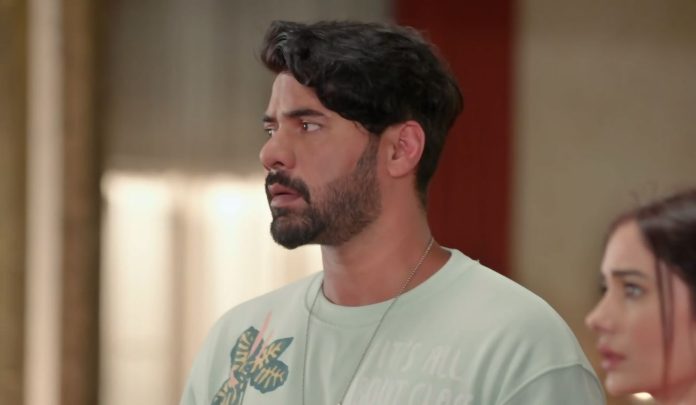 Kumkum Bhagya 26th October 2021 Written Update New arrest The police arrives at Pragya’s house to arrest Abhi, accusing him to be responsible for the death of six people. Pragya, Aaliya, Tanu and Abhi are shocked to know this. Gaurav has planned Abhi’s arrest by framing him in the building collapse accident. Abhi wanted to renovate his old office, but not at the cost of anyone’s life. He wanted the workers safety as well. He knew that the building structure has turned weak and called off the renovation plan, just to rebuilt the building afresh. Abhi has no idea how the people died in the accident.

On the other hand, Rhea angers Ranbir more by firmly stating about Prachi and Siddharth’s affair. She constantly fills his mind against Prachi. Ranbir asks her to stop the nonsense. She tells him that everyone can tolerate a relation’s breaking, but not the breaking of a heart and faith, especially from someone he loves the most. He clearly replies that he is enough of her nonsense, and doesn’t want to hear anything again. Rhea tells Ranbir that she will prove the truth to him, whatever she said is true. Prachi overhears them and asks what is Rhea saying. Ranbir doesn’t want Rhea to spill the filth around. He lies to Prachi just to save her from the sorrow. Keep reading.

Earlier in the show, Abhi and Pragya have their shy conversations going on. Mitali tells that Abhi always asks for her. Abhi asks Mitali not to tell anything further. Tanu asks him why is he behaving like a teenager falling in love. Abhi doesn’t want to answer her. Aaliya watches their arguments. He asks Tanu who is she to ask him even if he falls in love.

She reminds him that she supported him in the bad time. He tells that he didn’t force her to stay with him, she stayed with him under the same roof but never supported him. She tells that she is his wife, she stayed with her husband even in the chawl. He tells that he is Pragya’s husband now, he never got divorced from Pragya. He asks Tanu not to play any wife’s drama, he never gave her a wife’s rights, since those rights just belongs to Pragya. Pragya gets touched on hearing his words.

Pragya defends her husband. She believes that he can never do wrong. Aaliya too shows her faith on her brother. Pragya calls up Subhash and asks him to tell the police that Abhi didn’t give any such order. Subhash lies that Abhi ordered him to break the wall, knowing the building is weak and will collapse. Abhi scolds Subhash for his lie. Subhash asks him not to threaten, and let the court decide. Aaliya stops the police from arresting her brother. Pragya also attempts to save Abhi, but in vain.

Abhi tells them that he didn’t do anything wrong. He still gets arrested. Gaurav is the mastermind behind this conspiracy. He recalls his meeting with Subhash. He tells Subhash that he shall break the East side wall and then frame Abhi. He bribes Subhash. He asks him to leave the people to die. He promises that Abhi will go to the jail. He pays the money to Subhash and gets his plan executed. He takes his revenge on Abhi and Pragya.

Pragya asks Aaliya and Tanu to tell them the truth. Aaliya blames Pragya for sending Abhi to the jail. Tanu tells that Pragya just blames others to get saved. Aaliya tells that Abhi is her brother, she worries for him. Pragya asks Tanu not to interrupt when she has no relation with Abhi. She scolds Aaliya and Tanu. She tells that she will not spare them if they do anything against Abhi. Aaliya asks her to go and save Abhi, instead shouting on them. Pragya knows that Abhi is innocent.

Pragya tells that she will prove Gaurav’s connection with this case. She swears to get them out of Abhi’s life once he comes back home. She tells that her fate will also support her this time. She shows the strength of a wife. Aaliya yells at Mitali. She gets angry that Gaurav dragged Abhi in between his revenge plan. Gaurav is happy that his plan worked. Pragya struggles to arrange Abhi’s bail. Gaurav calls her to taunt about Abhi’s arrest. Pragya tells that he will soon get jailed. She asks him not to act innocent, he won’t win by the attack. She threatens to get him jailed.

He tells that he wants to stay in her heart. He tells that he can help her, he can guarantee Abhi’s release, but at a price. Pragya gets angered. The reporters enter the police station and reach Abhi to get his statement on the case. Pragya meets Abhi. He apologizes to her. She knows that he didn’t do anything wrong. She tells that she will answer the media. She assures that she is always with him, she completely trusts him. He likes to see her faith. She tells that she will be in pain if he gets hurt. She admits her feelings. She tells Abhi that this feeling is important to connect her with her old self.

She feels the same love for Abhi. She can’t tolerate to see him in the lockup. Abhi tells that he can break the bars if she wants. She asks him not to act heroic. She tells that lawyer is coming to get him bailed out. He tells that he has become her slave, there is nothing left. She goes to attend the lawyer. Aaliya meets Gaurav to confront him about Abhi’s arrest. She tells that she told him about Abhi’s visit at the old office. She asks him why did he frame her brother. He asks her to stay relaxed. Tanu tells him that he can never win Aaliya’s heart by hurting Abhi. He tells that he doesn’t want to win Aaliya’s heart, but take revenge on Pragya. He wants Abhi to know who is the real boss.

Aaliya berates him for targeting her brother. He tells that he will help Abhi when Pragya comes to seek his help, she would have to fulfill his dream. Tanu asks him if he will propose Pragya. Gaurav tells that she has a small thinking, he just thinks of business, not marriage. He wants Pragya’s blooming business. Aaliya asks why would Pragya give her business to him. Gaurav tells that he has the evidence that can prove Abhi innocent. Aaliya is stunned. Stay tuned.

Reviewed Rating for Kumkum Bhagya 26th October 2021 Written Update New arrest: 4/5 This rating is solely based on the opinion of the writer. You may post your own take on the show in the comment section below.