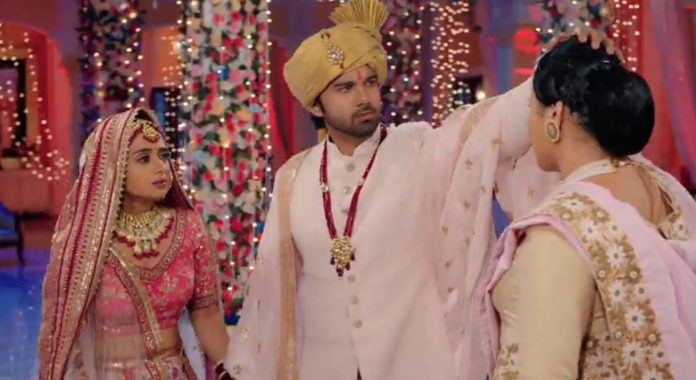 Sasural Simar Ka 2 26th October 2021 Written Update Aarav’s choice Simar and Aarav see each other and get too happy. Simar feels she got the entire world. She dreams of a union with Aarav. Aarav and Simar hold hands and come downstairs to the family, when Badimaa mentions the rituals that would take place according to the traditions of the Oswal family. Badimaa calls the pandit home. She asks pandit to prepare for the rituals. He tells that the mahurat isn’t auspicious. Badimaa tells that this moment is the right one for the special ritual. The family is puzzled. Gajender asks Badimaa what does she mean.

Badimaa shocks them by telling that they are going to break Aarav and Simar’s marriage by making them undo the marriage vows. She tells that they will take the reverse rounds and break the relation completely. This twist shocks the entire family, but gives happiness to Chitra and Giriraj. Aarav holds Simar’s hand and stops her. Badimaa asks him to leave Simar’s hand. Aarav asks her the meaning. Badimaa asks him to end his rekation with Simar forever. She makes Aarav swear on her and admit that he will never look back to Simar.

She asks him to choose between Simar and her. He tells her that he has always obeyed her, it doesn’t mean that she doesn’t humiliate Simar in this manner before sending her away from the house. Badimaa tells that he isn’t able to see how Simar is breaking the Oswal family rules since she came in their house. She tells that Simar sang a song in their house, when Simar knows how much she hates singing and music. Aarav tells that its a wrong decision to give them hopes and break it.

Badimaa tells that overconfidence is bad, his Oswal blood should be controlled. She asks him to think before giving her a wrong reply. He tells that he is just stating the truth. Badimaa spits the poison against Simar. She tells that Simar ruined their happiness after stepping in their house. She tells that every member of the family know that Simar is unlucky for them. Badimaa tells that she needs to protect her family first. Simar gets away from Aarav. Meanwhile, Reema asks Vivaan to recover and then fight with her.

She tells that he should get back and spend time with her. She adds that they have to spend their lives together, they will fight but also love each other. Mohit sends Reema out of the ward. He hides from her. He gets worried that she may identify him. He goes to Vivaan to kill him. Aarav feels Badimaa wants to humiliate Simar and him by planning the Ulte Phere. Sandhya asks Badimaa not to torture her son and Bahu.

Badimaa tells that Simar has come into their house by cheat. Aarav tells Badimaa that the entire family has accepted Simar, she has won their hearts by her love. He sings Simar’s praise. He tells that they should send away Simar without this humiliation, else she should better stop her in the family.

Badimaa tells that she knew he will rebel because of Simar. She goes mad and tells them that she lost her love for the sake of her family. She feels hurt. Simar runs to Badimaa with concern, when the latter hurts herself. Badimaa feels Simar can never make any family. Simar tells Aarav that Badimaa’s heart is hurt. She doesn’t want to hurt Badimaa. She tells that she will leave. She asks Aarav to free her from their relation, which is unwanted by Badimaa. Will Badimaa change her decision? Keep reading.

Reviewed Rating for Barrister Babu 26th October 2021 Written Update Shocking visitor: 3/5 This rating is solely based on the opinion of the writer. You may post your own take on the show in the comment section below.