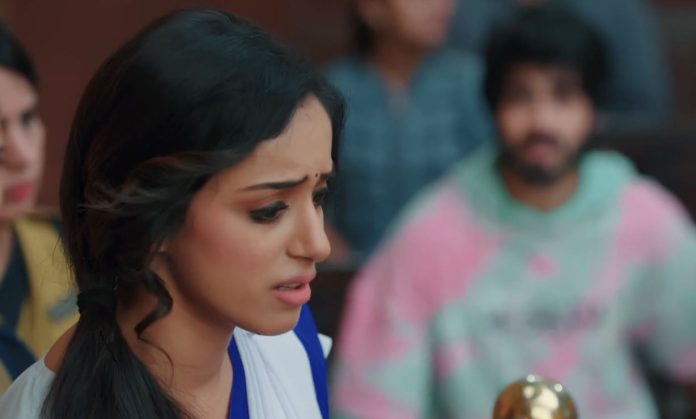 Yeh Hai Chahatein 25th October 2021 Written Update Prisha death news Police constables present with Prisha are busy in removing tree branches from their way. Prisha wonders what is happening. A truck comes from behind hitting the police van with Prisha inside. The truck leaves from there. Police van catches fire. Before police can rescue Prisha, the van blasts, scaring everyone. A female constable informs inspector chautala that a truck hit their van and a blast happened. Inspector Chautala asks her if Prisha is fine? Constable replies that Prisha was inside the van during the blasts. Inspector chautala asks her driver to take a U-turn.

On the other side, Saaransh is seen unwell with a cold and cough. Sharda is seen giving steam to Saaransh. Vasudha leaves for the court. Sharda tells Vasudha that she will come after sometime. Saaransh feels better after the steam. Rudraksh calls the police station, a constable tells him that Prisha left with inspector chautala a long ago. Inspector chautala shocks Rudra by informing that the police van blasted with Prisha inside. Phone falls from his hand. GPS picks the phone and gets shocked to know that Prisha is no more.

Inspector chautala requests GPS, Rudraksh and Vasudha to reach the accident place. They reach the accident place where Rudraksh gets inconsolable. Inspey Chautala informs that the blast was severe. They show Prisha’s family a burnt dead body. Vasudha shouts seeing it. She says the body has Prisha’s anklet on its foot. Rudra breaks down after this. He cries and tells Prisha that she can’t leave him. She refuses to believe that it’s Prisha’s dead body. He cries in Vasudha’s arms.

Next Prisha is seen unconscious in Armaan’s house. He tells unconscious Prisha that she is dead for everyone now and will live with him only. He further says that Prisha is only his. He wakes up Prisha by spraying water on her. Prisha gets conscious and asks her what she is doing with him. She says that she has to reach court soon. Armaan tells Prisha that he got her kidnapped before the blast. Flashbacks of Armaan’s successful plan are shown. In the flashback, it is shown that Armaan’s goons kidnapped Prisha before the accident and blast. Armaan’s goons also kept a dead body in the police van with Prisha’s anklet on its foot.

Prisha asks how he can do this. She tries to leave but feels dizzy. Armaan tries to help her but she asks him to stay away. She tells him that she knows how evil he is. Prisha tells Armaan that Rudra told her everything evil he did and his evil purpose behind it. She asks Armaan to not touch her. Armaan tells Prisha that he got her kidnapped because she is pregnant. Prisha gets shocked and recalls her intimate moments with Rudra at the hotel in their room. She thinks it’s Rudra’s child and tries to inform Rudra about it.

On the other side, Rudra thinks how will he inform about Prisha’s death to Sharda, Saaransh and Anvi. Media starts questioning Rudra about what he will do after Prisha’s death. Inspector Chautla requests the media to leave Prisha’s family alone in their sad time. On the other side, Prisha asks Armaan how he got to know that she is pregnant. Armaan tells Prisha that he too lost his wife Sanya. He explains to Prisha that he was in touch with his sources at the police station. Flashback is shown where Prisha fainted and police thought it was because of karwa chauth fast Prisha kept.

In the next episode, Prisha will tell Armaan that Rudra was making efforts to get free of Sanya’s murder charges. She will ask Armaan why he came in between. Armaan will tell Prisha that Rudra couldn’t have freed her on the basis of make-up artists’ witness. Prisha will ask Armaan how he got to know about it? Anvi will hear and see Digvijay watching news of Prisha’s death. Anvi will run and inform Saaransh and Sharda about it. Rudra will return home and confirm it. Prisha will think to inform Rudra about her being alive and will go to meet him.

Reviewed Rating for Yeh Hai Chahatein 25th October 2021 Written Update Prisha dead: 5/5 This rating is solely based on the opinion of the writer. You may post your own take on the show in the comment section below.