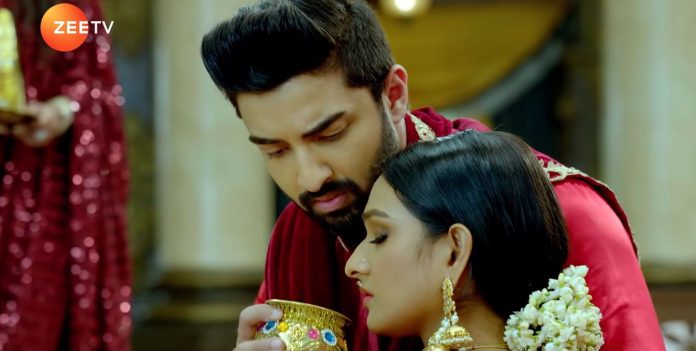 Bhagya Lakshmi 27th October 2021 Written Update Karwachauth twist Neelam also gets on Lakshmi’s side after she sees the latter winning her dad’s heart by her sincerity. She asks Karishma not to treat Lakshmi badly. Karishma finds Neelam supporting Lakshmi, who is keeping a fast for Rishi. She calls up Malishka and informs her how Neelam had sided with Lakshmi today. She tells her that if the same thing goes on, then soon Rishi will also go on Lakshmi’s side, leaving Malishka behind. Rishi tells Lakshmi that she is just made for him. Lakshmi wins his heart. Karishma tells that Lakshmi will soon win Rishi’s heart.

Malishka tells that it won’t happen, because she has a plan to spend the entire day with Rishi. She calls Rishi to her home. Rishi feels guilty of cheating Lakshmi and cries. Malishka tells her mom that she will not let Lakshmi win at any cost. Lakshmi keeps the first fast for her first Karwachauth for Rishi’s sake. Malishka tells Karishma that she doesn’t believe in such traditions, she will not keep any such fast. Karishma asks her to keep the Karwa chauth fast if she has to take Lakshmi’s place.

Malishka eats her food, but acts to fake a fast for Rishi. She wants to prove her love to Rishi. Rishi finds Malishka keeping a fast for him. He gets impressed with her love. Lakshmi keeps a fast for Rishi with all her heart and devotion. She gets dizzy and faints in front of Rishi. Rishi leaves his love Malishka, and rushes to his wife Lakshmi. Malishka is much upset to see Rishi favoring his wife. Rishi gets stressed to find Malishka upset.

Rano decides to spoil Lakshmi’s first Karwa Chauth by not sending her the sargi and feels that due to hunger and tiredness she will break her fast. Rano is sure that Lakshmi will secretly eat something but Neha says that Lakshmi will religiously follow it. Rano thinks that when Lakshmi will fall unconscious her family members will make her eat something so she doesn’t die. Dadi gives advice to Lakshmi about the Karwa Chauth and gives her courage. Lakshmi is happy that her family members are her courage and think so much about her. Lakshmi sees Rishi and feels sad by remembering his lie. Rishi is about to talk to her when Dadi calls her.

Lakshmi shows anger to Rishi and goes inside Dadi’s room. Rishi feels that Lakshmi is giving attitude and says he is not dying to talk to her and walks away. He stops and sees if anyone has heard or not and feels that Lakshmi must have something to talk about and he should not give her attitude. Dadi gives Lakshmi a ring given by Rishi’s grandmother and says that she used to love Rishi a lot but due to deteriorating health she gave the ring to her and asked her to give it to Rishi’s wife. Lakshmi accepts the ring and Dadi says that if Rishi’s grandmother would have been alive she would have loved her more than Rishi.

Rishi comes and asks about the stuff given to Lakshmi and Dadi says that Lakshmi will keep Karwa Chauth fast for him and these things have been given by Neelam because it is a tradition. Dadi tells Rishi that husbands also have to gift their wives and she should also gift something nice to Lakshmi after she breaks the fast. Rishi tells Lakshmi to not keep any fast for him and there will not be any Karwa Chauth celebration. Dadi asks him why and Rishi tells her that she knows everything. Lakshmi asks Rishi what does Dadi know. Aahana tells Devika that Lakshmi is upset since she came home and Devika says that the house is lively when Lakshmi is happy. Karishma is listening to all these and asks them what they were doing. Aahana lies to Karishma and goes to sleep with Devika.

Karishma thinks that she cannot trust Aahana but decides to use her against Lakshmi at the right time. Devika and Aahana discuss that they love Lakshmi a lot more than Malishka. Lakshmi asks Rishi why he is speaking like that because she has a right to keep Karwa Chauth for him as a wife. Rishi says that she is not habitual and it is useless but Lakshmi says that her mother used to tell that Karwa Chauth is not only done for a husband’s long life but also for a long-lasting and deep relationship. She says that if love is deep then only the relationship will be unbreakable. Lakshmi says that it is good for family members too as if the son of the family will have a long life.

Rishi says to Lakshmi that she will torture herself for him but Lakshmi says that it is not torture but love towards her husband. Lakshmi says that if she doesn’t keep fast for the first time then how she will get habituated to keep it for years to come. Lakshmi says that she will keep the fast and asks Rishi to not forbid her. Rishi tells Lakshmi that she is not understanding when Neelam comes and tells Rishi that he is not understanding what Lakshmi is telling. Neelam says that Lakshmi is right and she also keeps a fast for Virendra and he cares a lot for her but never stopped her because he knows that for her traditions, cultures, and values are very important. Neelam asks Rishi to support Lakshmi instead of stopping her.

Neelam asks Rishi to become Lakshmi’s strength. She asks Rishi to be available at home in the evening as after the moon will come out Lakshmi will perform a pooja and he has to be with her. Neelam asks Rishi to not give any excuses and Rishi leaves in anger. Rishi feels that Neelam is making things difficult for him by asking Lakshmi to keep a fast for him. Rishi suddenly remembers that there is club night the next day and he has to go there with Malishka. Rishi decides to cancel his plans with Malishka but she is busy sleeping. Rishi is scared of Malishka’s reaction when he will cancel the plan. Neelam sees Dadi and Lakshmi up so early in the morning. Dadi says that she had to make Sargi for Neelam and it is also Lakshmi’s first Karwa Chauth that is why she had to get up early.

Rano is busy eating food early morning before the Karwa Chauth starts and her husband asks her about Lakshmi’s Sargi. Rano says that the alarm did not ring and she couldn’t get up and her husband asks her to at least inform Lakshmi or else she will remain hungry. Neelam is waiting for Lakshmi’s Sargi to come as it still has not arrived. Neelam asks Dadi if they can give Sargi to her. Dadi agrees. Neelam says that mother-in-law can also give Sargi. Rano argues with her husband over sending Sargi to Lakshmi. Neelam cannot wait any longer and offers to give Sargi when the bell rings. Shalu and Bani reach Lakshmi’s house with the Sargi. Rano’s husband tells her that Karwa maa will arrange for Lakshmi’s Sargi herself.

Rano keeps fussing about Lakshmi. Neelam asks Lakshmi to eat Sargi nicely as she cannot eat anything the whole day. Lakshmi comes to know that Shalu has made the Sargi for her and she gets emotional. Lakshmi, Shalu, and Bani become emotional and hug each other. Bani informs Lakshmi that she had heard Rano and Neha’s conversation and that Rano was not going to send her the Sargi. Bani had later informed Shalu and they both decided to make Sargi for Lakshmi. Lakshmi says that she is lucky because God gave her lovely sisters like them. Lakshmi, Shalu, and Bani again hug each other. Will Rishi support Lakshmi during her fast? Keep reading.

Reviewed Rating for Bhagya Lakshmi 27th October 2021 Written Update Karwachauth twist: 4/5 This rating is solely based on the opinion of the writer. You may post your own take on the show in the comment section below.