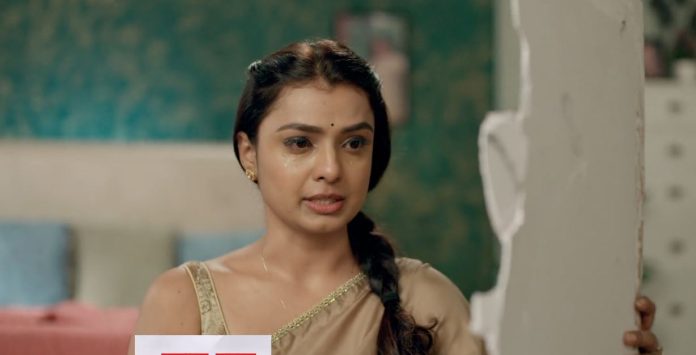 Imlie 26th October 2021 Written Update Malini violent outbreak Tripathis serve Kanjak’s prasad. Imlie signals one of the Kanjak who replies her yes in signal. Kanjak’s give their blessings to the Tripathi family members who touch their feet in the kanjak pooja process. Imlie asks Pranav to take Kanjak’s blessings. Kanjaks taps Pranav’s back hard for giving their blessings. When Jia (one of the Kanjak) blesses Pranav hard, pendrive falls from Pranav’s pocket.

Pranav gets a call and leaves to pick it unaware that pendrive fell from his pocket. Minister on call tells Pranav that he is waiting for him outside. Before Pranav could leave, Rupi stops and apologizes. She offers him his favourite drink. Pranav in hurry leaves from there and breaks the beverage glass in Rupi’s hand. Rupi gets scared and cries. Pranav meets the Minister outside Tripathi house and self praises himself. When the minister asks him for the pendrive, Pranav searches it in his pocket. On not finding the pendrive in his pocket, he recalls that the pendrive fell while Kanjak’s were giving him the blessings.

Pranav tells the Minister that he will bring the pendrive from inside as it may have fallen inside. Minister calls Pranav useless. He thinks he gave such important work to such a foolish person. Pranav returns inside the Tripathi house. He tries to get the pendrive from the Kanjak’s hand but finds marble instead. He acts innocent in front of Tripathis. He then sees Kanjak passing the pendrive to each other. Before the pendrive reach Imlie, Rupi grabs it.

Pranav ask Rupi to give him his pendrive as it has his important documents in it. Imlie stops Rupi from giving the pendrive to Pranav. Next Aparna is seen praying to god for the family’s happiness. Harish prays to God to give Rupi the strength to make the right decision. Radha prays for the family’s well being. Nishant prays for the family’s safety. Sundar prays to get educated like Imlie and start a utensils agency. Nani prays for defeating evil and for getting good food.

He asks Rupi to return him his pendrive. Rupi asks him to answer her question first. Pranav give some random answers. Rupi asks Pranav that he told her that he came for her and she is his first priority. Pranav replies to Rupi that she is his priority. Rupi says there is a difference between saying and doing. She tells Pranav that his lie got caught. Pranav asks Rupi to believe that its his pendrive. Rupi tells Pranav that she understood what he came for. She asks Imlie what is her oldest and loveliest memory of her and Pranav. Imlie says she will answer her question but she has to promise that it will no more be her loveliest memory.

She promises to make Rupi happy every Navratri. Rupi apologizes to Imlie for not trusting her. Imlie insults Pranav. Parnav gets angry at Rupi for smiling at his insult. He accepts that he didn’t return for Rupi. Pranav asks Rupi how dare she think he will miss a foolish woman like her even after so many years. He again and again calls Rupi foolish. He even calls Imlie illiterate. Imlie gets angry at Pranav. Rupi in return calls Pranav foolish. She reveals to Pranav that since starting she knew he was of loose character but remained silent only for her daughter, her mother and in-laws.

Rupi says a woman respects everyone. She says to Pranav that he doesn’t deserve her. Rupi says she is leaving him forever for her betterment. She asks him to get out of her life. Pranav threatens to slap Rupi. He asks her to return his pendrive. Imlie asks Pranav how dare he even think of slapping Rupi. Before Pranav could snatch pendrive from Rupi, the latter throws it towards Imlie. Angry Pranav raises his hand to slap Rupi but Imlie stops him.

Imlie calls Pranav demons and starts fighting with him. She slaps Pranav non-stop and pushes him aside. Pranav tries punching Imlie but she saves herself. Rupi passes the broom to lmlie. Imlie beats Pranav with a broom. Before Pranav could hit Imie, the police grab him. Tripathis too reach there. Imlie asks the inspector to arrest Pranav as he is too involved with the drug smuggler. This shocks Tripathis. She says she has the pendrive. Pranav threatens Imlie before leaving. Jia gives. A pendrive to the minister waiting outside.

Minister connects the pendrive and watches Imlie’s message of him getting exposed. Police arrests the minister too and releases Aditya. Aparna hugs Aditya and cries. Imlie asks Rupi why she is crying now. Rupi replies that she wasted time on idiot Pranav. Imlie says women doesn’t need a man to protect her. Aditya says men need women from birth till death. Radha and Harish ask for an apology from Rupi for not letting her choose her life partner. Aparna and Pankaj praise Rupi and Imlie’s strength.

She tells Pankaj that she doesn’t know how to seek forgiveness from Imlie for behaving badly with her. Pankaj tells Aparna that Imlie doesn’t need her apology, she just needs elders love and blessings. He also tells Aparna that Imlie fulfilled all the responsibilities of being a good daughter-in-law and even a daughter. Aparna says she wants to give lmlie all her rights in Imlie’s style after garba.

In the next episode, Malini will ask Aparna what surprise is she planning for Imlie? Aparna will tell Malini that she just wants to correct her mistake. Malini will get angry, break things in her room and lit fire on Imlie’s picture on knowing that Aparna and Tripathis are ready to accept Imlie as their daughter-in-law. While Aditya will get happy with Tripathis accepting Imlie, Malini will think that she will not let lmlie win and will oust her from Tripathi house.

Reviewed Rating for Imlie 26th October 2021 Written Update Malini violent outbreak: 3/5 This rating is solely based on the opinion of the writer. You may post your own take on the show in the comment section below.