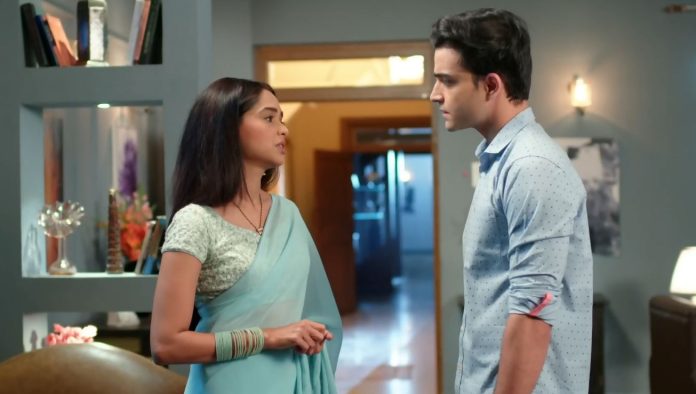 Kumkum Bhagya 27th October 2021 Written Update Prachi suspicious Aaliya is worried for Abhi, after knowing that Gaurav had planned everything just to defeat Pragya. She doesn’t want her brother to suffer in the jail. She learns that Gaurav has the evidence that can prove Abhi innocent and bring him out of the jail, but he will give the evidence only when Pragya agrees to his terms. He wants to overtake Pragya’s business. Aaliya returns home to convey Gaurav’s condition to Pragya. She begs Pragya and asks her to save Abhi. She reveals that she had gone to meet Gaurav, who confessed that he has a proof in Abhi’s favor. She tells that Gaurav will give them the evidence if Pragya talks to him. She asks him to save her love Abhi.

Pragya is stunned to see Aaliya’s drama. On the other hand, Prachi senses a bad happening. She tells Ranbir that she is feeling restless like something wrong is going to happen. She tells him that she is worried because of Rhea, who is behaving really weird since few days. She shares her worries with Ranbir. Ranbir tries to pacify Prachi, knowing she has really sensed the right thing. Meanwhile, Pragya goes to the police station to meet Abhi. He tells her that he is really glad to be her inspiration, and receive the credit for her success, but he will not be able to live if he becomes a reason for her destruction.

Aaliya and Tanu talk to Gaurav, who assures that he won’t harm Abhi, he just wants Pragya to give away her business. Tanu tells that he doesn’t know Pragya, she will become Durga and kill him, she will save Abhi and not give him anything, she can do anything to protect Abhi. She tells that Pragya is enough to save Abhi from his evil plans. He tells that his evil mind will conquer Pragya this time. Tanu loves his confidence. Pragya meets the lawyer for Abhi’s bail. Lawyer tells her that they can’t get the bail for Abhi, because the bail got rejected in the court. He tells that her emotions won’t help Abhi. Pragya falls helpless. She recalls Gaurav’s offer. She rushes. She wants to save Abhi at any cost. Abhi recalls her motivating words and feels touched. He misses Pragya.

Pragya meets Abhi before going to meet Gaurav. She asks him if Gaurav was present when he went to meet the contractor. He tells her that Gaurav wasn’t there. He asks if Gaurav is behind it. She feels guilty that she is the reason for this. He tells that he had beaten up Gaurav, so the latter will target him. He asks her why does she think that Gaurav is behind it. She tells him about Gaurav’s offer to help him. She doubts that he is involved. He asks her not to accept Gaurav’s help, he will soon get the bail. She tells that the bail got rejected, but she will bring him out soon by proving the truth.

He stops Pragya for a hearty conversation. He asks her if she is hurt by seeing him in the lockup. He tells that this would be a new feeling for her. He admits that he also felt something, he missed that old feeling a lot. He tells that he is feeling happy that she is standing by him. He feels that good things stay at the same place, but complains reach out first. She tells that she will come back soon to meet him. They have a moment and hold hands. He asks her not to cry.

Furthermore, Pragya reaches Gaurav to know the truth. He asks her how can he help her. She asks him to tell er the truth. He asks her to know how she can help her husband. She tells that Abhi isn’t a culprit, she knows the real culprit. He replies that he has no interest in knowing the common things. He tells that Tanu and Aaliya don’t know that Abhi is Pragya’s weakness. He adds that just he can save Abhi, when his bail also got rejected. She asks him how can he help her in freeing Abhi. He tells that he has a proof for Abhi’s innocence, but he needs a price. She asks him what does he want.

He asks her for the companies, factories and business. Pragya tells that he will get everything. She asks him about the proof. Gaurav tells her that he has Abhi’s recording when he told the contractor that he doesn’t want to put anyone in danger, he doesn’t want to break the East side wall. He asks her to pay a price before going. She tells that he will need to pay a price now. She records his statement. He points the gun at her. He tells that he knew it that she will record their conversation.

He snatches her phone and deletes the video. He returns her phone. She tells that she came to know the truth, and now she knows it. He asks her to prove the truth. She promises to prove his lie. She leaves. He asks her to come back and not anger him. She meets Subhash. She vents anger on him. She asks him how much did Gaurav pay him. She tells that she didn’t come to scare or threaten him. She asks him how can he frame Abhi. Subhash denies the truth. Pragya asks him to have a conscience and think of the people who died by his crime. She wants him to tell the truth in the court.

She tells that he can repent by naming the mastermind. Subhash asks her how can she expect this that he puts himself into trouble. She tells that she will prove his crime and get him punished. She threatens to send him to the jail. He gets stressed. He knows that she has no proof. He wants to know how did she sound so confident. Elsewhere, Ranbir asks Pallavi if Vikram isn’t coming for dinner. She tells that he will come later. Rhea joins them. Pallavi asks her about Prachi. Rhea tells that Prachi would be with Siddharth, like always. She taunts Ranbir.

Pallavi tells that Prachi doesn’t know household work, its better that she works in the office. She praises Prachi’s efficiency in the office work. She compares Rhea with Prachi. Rhea is left angered. Pallavi asks Ranbir to come along with her to the NGO. Aaliya is worried for Abhi, while Tanu is relaxed. Tanu asks Aaliya to always support her. She counts Aaliya’s plottings. She praises Aaliya for having an evil mind. Aaliya tells that she did everything for her family. Tanu shows her the mirror. Aaliya tells that she is a good sister and good Bua, she can do anything for Abhi and Rhea, but not Prachi.

She asks Tanu not to irritate her. She tells that Pragya won’t give anything to Gaurav, Pragya loves Abhi but Sushma won’t allow her to make a sacrifice. She tells that she will choose money over Purab, even when she loves him a lot. She tells Tanu that Gaurav informed her that Pragya refused to give him anything. Tanu was thinking that Pragya will give away everything for her love. Keep reading.

Reviewed Rating for Kumkum Bhagya 27th October 2021 Written Update Prachi suspicious: 4/5 This rating is solely based on the opinion of the writer. You may post your own take on the show in the comment section below.