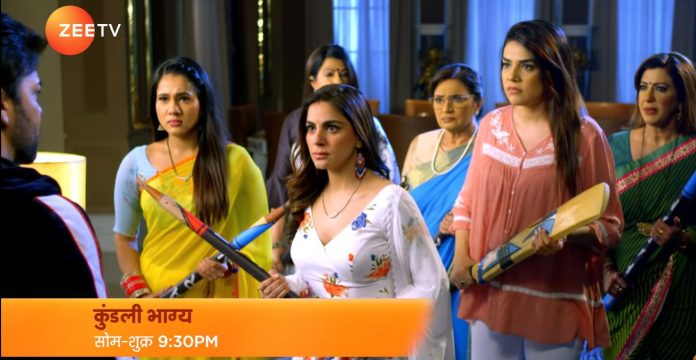 Kundali Bhagya 27th October 2021 Written Update Preeta conquers Preeta alerts Rakhi about Prithvi’s next plan. She tells Rakhi that though they have acted normal in front of Prithvi, he will still try to target the weak link of the case. Rakhi replies that the weak link is Sandeep. Preeta tells Rakhi that Prithvi would be using his mind a lot at this time, he would be surely going to Sandeep. Prithvi realizes that the weak link of the case, Sandeep is in the hospital. He doubts that Sandeep has joined hands with Preeta, so she was behaving so weird. Preeta tells that Prithvi shouldn’t know that Sandeep is with them. Prithvi goes to meet Sandeep at the hospital and finds him sleeping.

He goes to kill Sandeep, but Preeta and the Luthras reach there to save Sandeep, and catch Prithvi red-handed. Prithvi is caught into the action. Preeta tells that his game is over. Prithvi takes Preeta at the knife point, but she pushes him away. Preeta tells that it will be his end, his evil has to lose. Will it be the end for Prithvi? Keep reading. Watch the latest promo below.

Earlier in the show, Prithvi tells Rakhi that he is always there as a son to help her. He realizes that Preeta is planning something. He stops Preeta for a talk. He offers her help regarding Rishabh’s case. Preeta plays a smart game to make him admit the truth. She knows that he is behind the conspiracy against Rishabh. She tells that he doesn’t even know anything, that the entire family is in stress, they have no evidence in Rishabh’s favor. She asks Prithvi to help her with the clue if he finds it before time. She fakes helplessness in front of him and leaves him puzzled. Will Preeta win in her plans this time and rescue Rishabh? Will Sherlyn really go on Rishabh’s side? Keep reading.

Preeta thanks Rakhi for not telling anything to Prithvi. Rakhi tells that she was killing Prithvi in her thoughts. Sameer praises them to be so strong and patient. Prithvi knows that Preeta has much patience, she was hiding something and didn’t tell him anything, she is definitely up to something. He asks Sherlyn if she knows what is Preeta planning against him. She tells that she doesn’t know anything. He tells that he is damn sure that something is wrong. He didn’t want to be so overconfident. He thinks what can go wrong. Preeta tells that Prithvi would be thinking of the weak link.

Prithvi gets relieved that Sandeep will not cheat him. Preeta gets Karan’s missed calls. She calls him back. He is in Pune. He tells that he couldn’t answer her calls before. She replies that even she missed his calls. She tells him about the evidence found against Sandeep. Karan and Preeta’s call connection breaks. He tells her that he found something more important than the evidence. He finds the lawyer’s assistant meeting someone. She wishes Karan returns home soon. She wanted to tell him about Sandeep getting in their favor.

Sandeep calls Preeta and informs that Prithvi had come to make an attempt to kill him. She gets worried. He asks her to fulfill her promise and protect him. She promises to protect him. He assures that he is with her, he will go to the court as a witness to give statement in Rishabh’s favor. She is very grateful to him. She tells that she will not let anything happen to him. Sandeep doesn’t want to go to the jail. He decides to support the Luthras. Rakhi wakes up Mahesh and asks him to get ready for the court hearing.

She is positive to bring her son home. Prithvi gets doubtful seeing them. Preeta and Rakhi see him and control their emotions. Rakhi tells her that bad doesn’t happen with the good person, that’s why Rishabh will come home today. Preeta wants Rakhi to control her feelings. Prithvi hears them and finds Rakhi too confident, when she tells that she will make Rishabh’s favorite food today. He wonders what’s happening. Preeta asks Rakhi to control herself and not give any hint to Prithvi. Rakhi apologizes to Preeta. Rakhi goes to make sweets for her son. Kritika gets ready and excited to welcome Rishabh home.

She tells Prithvi that everyone is positive. Prithvi tells that its a great news, but he doesn’t know the proof gathered by Preeta. She tells him that she has no idea about it. Sherlyn finds Rakhi and Kareena cooking food for Rishabh. She doesn’t know if she should get happy for Rishabh or get upset for Prithvi. She thinks she is safe, but Prithvi won’t be saved from Rishabh once the latter comes home. The family makes prayers and leaves for the court. The Luthras wait for Rishabh at the court. They meet Rishabh. Rakhi hugs Rishabh and tells that he will be coming home today.

They enter the courtroom. Kritika waits for Rishabh’s lawyer. Prithvi is conscious to know what’s happening. He finds Sherlyn and Rishabh sharing an eyelock. He doubts that Preeta has a plan, and even Sherlyn is up to something. Prithvi gets terrified when Preeta builds up the suspense by her silent stares. Judge tells the court that he will be declaring the locked verdict. Rishabh’s lawyer appeals the judge to hear him once, since he has an evidence that will change the case direction completely. Will Prithvi get exposed this time? Keep reading.

Reviewed Rating for Kundali Bhagya 27th October 2021 Written Update New Promo: 4/5 This rating is solely based on the opinion of the writer. You may post your own take on the show in the comment section below.