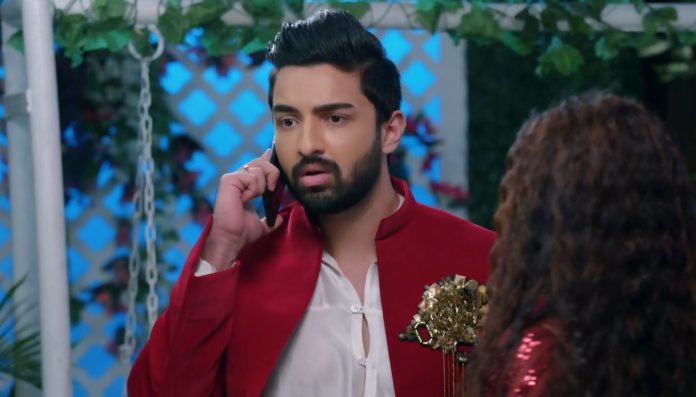 Bhagya Lakshmi 28th October 2021 Written Update Shocker for Rishi Virender asks Rishi to have the food with him. He tells that its Rishi’s favorite dish. Rishi refuses to have the food, stating that he is observing a fast. Lakshmi gets touched by Rishi’s gesture. She realizes that he has kept a fast for her sake. She tells Ayush that she has never seen a husband keeping a fast for his wife, Rishi has kept a fast for her and made her the world’s most luckiest wife. She feels much happy to get a husband like Rishi.

Malishka’s mum advises her to make Rishi away from Lakshmi. She tells that Rishi shouldn’t have any concern for Lakshmi, she shouldn’t be in his mind or heart. She asks Malishka to call Rishi home. Malishka calls up Rishi to tell him that she is fasting for his long-life, its her first Karwachauth. She asks him to come home and spend time with her to make her fast easier. Rishi gives a word that he is coming. She gets glad that he is coming to meet her. Rishi makes a work excuse in front of Lakshmi. He tells Neelam that he has an urgent meeting at his office.

Neelam asks him to come back before the moon onset. Rishi makes a leave. Lakshmi gets decked up and waits for Rishi’s return, while he reaches Malishka’s house to meet her. Malishka eats the cake, and realizes that her fast broke. She wonders what will she tell Rishi about her fast. Lakshmi faints down during the Karwachauth celebrations. Neelam calls up Rishi to summon him home at the earliest. She asks him why isn’t he at home when he knows about the function happening. She asks him to come home for Lakshmi, who fainted suddenly due to her fast. Rishi gets a shocker. He leaves Maliskha and rushes home to attend Lakshmi.

Lakshmi opens the curtains and Rishi gets up. He sees the time and feels that he is late for the office but realizes that today he needs to be home. Rishi asks Lakshmi to take out his clothes from the cupboard but she is gone. He sees that Lakshmi has already kept his clothes before he could tell her. Rishi wonders what has happened to Lakshmi and why she is behaving strangely with him. Rishi feels that if there is a problem then she should speak and not avoid it. He feels that she didn’t even smile at him leave alone speak to him. Rishi senses that something is wrong and wonders what he did.

Lakshmi asks Virendra to think only about Rishi and not worry about her. Karishma asks Lakshmi to call for Sanjay but Virendra stops her and asks Karishma why can’t she call him. Karishma says that Sanjay is in the kitchen and her voice will not reach him. Virendra asks her to go a little ahead and call him. Karishma asks Virendra what is the issue and he replies that Lakshmi has kept a fast and she will not do any work today. Karishma says that she is not asking her to do any work but just asking her to call him. She tells Virendra why is he making a big issue out of it and Virendra says that it is serious and she should take it seriously only.

Neelam comes there and says that Virendra is right. Karishma says that she hasn’t tortured or troubled her and asks Lakshmi to speak up. She tells that she knows that both of them are worried for her but she should speak something. Lakshmi goes to speak but Neelam says that she heard everything. Neelam tells Karishma that she is not torturing her but she cannot treat her like this either. Neelam warns Karishma that it is her fast today and she should give her blessings and let her rest as Virendra said. Virendra asks Lakshmi to go and rest and she leaves. Neelam is angry with Karishma and says that she has told her many times that Lakshmi has kept a fast for her son and she shouldn’t trouble her.

Neelam leaves in anger. Karishma tries to speak to Virendra but he warns her that today she will not speak anything bad about Lakshmi just because she likes Malishka. Malishka’s mom tells her that she did not behave properly with Karishma last night as she genuinely cares for her. Malishka says that she knows but her mother asks her to call Karishma and tell sorry. Malishka senses that something is wrong and Karishma says that day by day the drama is increasing and today everyone has made Lakshmi, the goddess and are pampering her. Karishma tells her that just because Lakshmi has kept a fast she is taken extra care of. Malishka understands that Neelam must have forced her and says that she does not believe in Karwa Chauth.

Malishka says that she doesn’t plan to fast after marriage. Karishma says that Lakshmi has kept the fast willfully and she is doing it to increase Rishi’s life making her an ideal bahu. Karishma tells Malishka how Virendra and Neelam scolded her and Malishka is angry that Neelam is expressing her love towards Lakshmi. Karishma warns her that if this is the case then Rishi will also start feeling for Lakshmi. Malishka says that she will not let it happen and plans to call Rishi to spend a day with her and her mom. Rishi calls Malishka and cancels the club night plan which makes her angry. Rishi tells her that he needs to stay home and support Lakshmi as she is fasting. Malishka calls Rishi home to see the perfumes candles she and her mom have made.

Malishka lies to Rishi because she wanted to call him to her house. She plans to not let Lakshmi win and decides to keep a fast for Rishi. Rishi gets ready to go but bangs into Lakshmi and she falls into his arms. Rishi looks into Lakshmi’s eyes and recalls his memories with Malishka. Lakshmi recalls Rishi’s pictures with a girl and remembers his lie. Lakshmi asks Rishi if she was the only girl he wanted to marry. Rishi says that she was the only girl he wanted to marry as she was made only for him. Lakshmi feels happy that Rishi said this and she thought of him having an affair with the showroom girl. Lakshmi sees the truth in Rishi’s eyes but Rishi is traumatized by saying such a big lie and feels uneasy.

Rano gets angry with her husband when he tells her that Shalu and Bani had gone to give Sargi to Lakshmi and said that you sent it. Rano’s husband says that the girls saved her dignity but Rano leaves in anger. Rishi goes to Malishka’s house and greets her mom. Lakshmi informs Shalu that Rishi told her that he wanted to marry her only and she could see the truth in his eyes. Malishka informs Rishi that she has kept a fast for him and Rishi also decides to return the gesture by keeping a fast for Malishka. Shalu feels that Lakshmi is simple but smart and if Rishi is lying she will catch it quickly. Shalu realizes that by saying one truth of marriage, Rishi covered the lie of having an affair.

Reviewed Rating for Bhagya Lakshmi 28th October 2021 Written Update Shocker for Rishi: 4/5 This rating is solely based on the opinion of the writer. You may post your own take on the show in the comment section below.