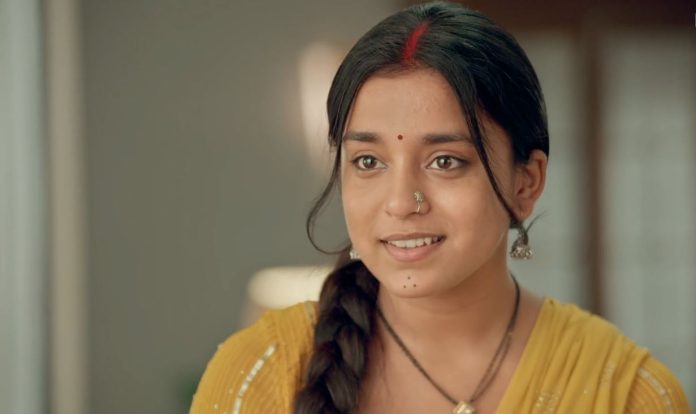 Imlie 27th October 2021 Written Update Good News Tripathis plans a surprise for Imlie behind her and Aditya’s back. Imlie comes there and everyone gets separated. Radha changes the topic and reminds Aparna to call the tailor. Imlie asks why isn’t anyone talking to her. She asks did she do something? She continues asking what happened? Harish asks Imlie to not talk in between elders and asks her to do her work. Malini feels happy thinking that Harish is scolding Imlie for interfering in between everyone. Imlie apologizes and leaves from there.

Tripathis gets mad at Harish for scolding Imlie. Harish says he didn’t got any idea to stop Imlie from knowing their plan. Malini gets shocked to know that Tripathis wants to give surprise to Imlie. She asks what surprise they are planning for Imlie. Aparna tells Malini that she just wants to rectify her mistake. Aditya comes there. Aparna says she never accepted Imlie as her daughter-in-law but Imlie always remained good for them. Aditya asks Aparna, is she ready to accept Imlie. Nishant tells Aditya that they want to surprise him and Imlie.

Aparna says to Aditya that she took time to accept lmlie and asks will she forgive her. Aditya hugs Aparna and thanks her. All this shocks Malini. Pankaj asks Aditya to not ruin their surprise by telling everything to Imlie. Aditya asks what surprise. Harish and Nishant say they should not reveal anything to Aditya. Aditya says first they increased his curiosity level and now not telling him anything. Harish and Nishant say they can’t trust Aditya. Pankaj shuts Aditya and asks him to eat.

Aparna sees Malini upset and asks her, is she fine. Rupi says Malini got excited hearing about the surprise for her younger sister Imlie. Aditya asks Malini if she took her morning medicines. Malini excuses herself by saying that she is having morning sickness. Next, Malini is seen breaking things in her room in anger. Her broken picture comes in between Aditya and Imlie’s broken picture frame. She cries thinking that Imlie can’t win after her so many tricks. Malini asks Aditya’s picture why he doesn’t love her like before. She further asks Aditya’s picture that why is his concentration only on Imlie when she is going to be his child’s mother.

Malini wonders why Tripathis forgot that she is going to be mother of Aditya’s child. She thinks about why everyone got ready to accept Imlie. Malini says to herself that she won’t let anybody else enter Aditya’s heart except her. She thinks she will not let Imlie come in between her and Aditya. Malini lights on Imlie’s picture and says that she has to go from here. Aditya gives Dandiya to Imlie. Imlie says she wants to play garba with everyone but nobody wants to do anything with her. She cries saying that nobody has forgiven her. Imlie says she should accept her defeat now.

Aditya tells Imlie she too hasn’t forgiven him till now. Imlie says she refers him as his own and is angry with him. Aditya explains Imlie that other family members may have the same thoughts. He asks her not to accept her defeat easily. Aditya requests Imlie to show everyone that their relationship is very strong even now. He challenges Imlie for dandiya/garba. Imlie starts teaching Aditya how to play garba. They enjoy spending time together.

Next morning, Tripathi’s are seen deciding clothes for Garba night. Radha and Aparna call Sundar as their family member and gifts him a kurta to wear on Garba night. Sundar thanks them. Rupi asks only one outfit, who is it for? Radha says the tailor stitched an extra outfit. She asks Imie to keep it. Aparna says it’s better if someone uses it instead of throwing it. Imlie takes the outfit and leaves. Aditya says it is looking very bad and real. Harish warns Aditya to not reveal anything to Imlie as she will understand what is real and what is fake.

Aditya says Imlie will cry with this behaviour. Pankaj asks Aditya to just wait for tonight. Malini asks if she can invite her parents. Aditya tells Malini no one will be comfortable in her mother Anu’s presence as she creates trouble/mess in their every family function. Malini makes excuses of her pregnancy mood swings. Aparna angers Malini by saying that she will invite her parents and Meethi too. Imlie is seen walking outside and gets worried seeing a stranger unwell. ‘Dr. Abhimanyu Birla’ from ‘Yeh Rishta Kya Kehlata Hai’ comes there and helps the stranger as well as Imlie. Stranger gets out of his panic attack and shares his pain with Imlie and Abhimanyu.

Imlie recalls her fight with Aditya. She comes out of her flashback and says if a person’s trust breaks his/her heart too breaks into pieces. She tells the stranger that she can understand his pain. Abhimanyu says a doctor can help if a person finds difficulty in breathing but nobody can help a person whose heart has broken. Imlie tells Abhimanyu that someone will break the walls that he has made stop love from entering his life.

On the other side, Anu assures Malini that she will help her to get rid of Imlie. She gets scared seeing a mouse. Meethi laughs at scared Anu. Anu asks Meethi to stop laughing and throw the mouse out. Meethi asks her to ask for help with respect. Scared Anu calls Meethi as Meethi Ji and requests her to take the mouse away. After Meethi helps her, Anu comes back to her old behaviour. She accuses Meethi of stealing other women’s husbands. Dev informs Meethi that Aparna and Radha send a special invitation for her for Garba night at their place.

Meethi gets surprised hearing it. She asks Dev aren’t Tripathis angry with Imlie. Dev tells her that Tripathis are organising something special for Imlie. Both Meethi and Dev gets happy. Meethi feels happy and thanks God. Dev tells her that Tripathis are no more angry with Imlie. Meethi says she wants to make food for the whole Tripathi family. Dev asks to tell him if she needs anything for making food. Anu feels angry and says lets see who traps whom. In the next episode, Imlie will stop Anu from killing the same mouse that scared her before.

Reviewed Rating for Imlie 27th October 2021 Written Update Good News: 4/5 This rating is solely based on the opinion of the writer. You may post your own take on the show in the comment section below.