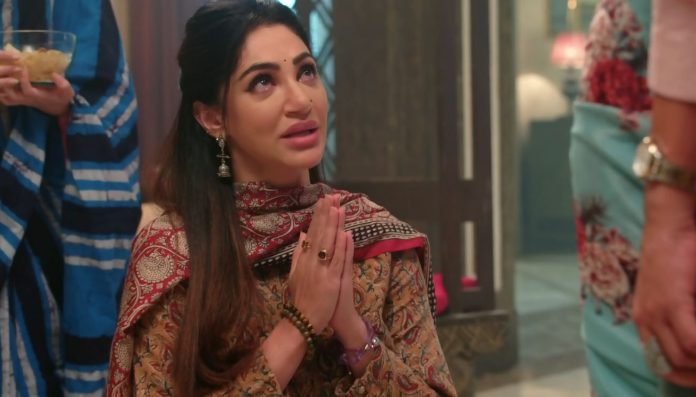 Kumkum Bhagya 28th October 2021 Written Update New deceive Aaliya and Tanu discuss the possibilities that Pragya would sacrifice her business and properties for Abhi’s sake. Pragya is too worried for Abhi, and recalls the promise made to him. She knows that Gaurav had planned everything for his revenge. Aaliya, Tanu and Pragya learn that Gaurav has the evidence that can prove Abhi innocent and bring him out of the jail, but he will give the evidence only when Pragya agrees to his terms. He wants to overtake Pragya’s business. Aaliya returns home to convey Gaurav’s condition to Pragya. She begs Pragya and asks her to save Abhi. She reveals that she had gone to meet Gaurav, who confessed that he has a proof in Abhi’s favor. She tells that Gaurav will give them the evidence if Pragya talks to him. She asks him to save her love Abhi.

Pragya is stunned to see Aaliya’s drama. On the other hand, Prachi senses a bad happening. She tells Ranbir that she is feeling restless like something wrong is going to happen. She tells him that she is worried because of Rhea, who is behaving really weird since few days. She shares her worries with Ranbir. Ranbir tries to pacify Prachi, knowing she has really sensed the right thing. Meanwhile, Pragya goes to the police station to meet Abhi. He tells her that he is really glad to be her inspiration, and receive the credit for her success, but he will not be able to live if he becomes a reason for her destruction.

Meanwhile, Siddharth pampers Prachi by making sweets for her. Ranbir asks him how does he always come in between them. Rhea also taunts that Siddharth never made a cup of tea for her till now, but he has made sweets for Prachi. She asks Ranbir to see the bonding between Siddharth and Prachi. She continues to fill the filth in Ranbir’s mind.

Ranbir gets furious and confronts Rhea for speaking nonsense in front of Pallavi. He tells her that her marriage will spoil if she thinks wrong. She tells that she can’t pretend about her married life, she can’t keep others mistaken like he does. She asks him to vent anger on Prachi and be honest. He rebukes her. He tells that she didn’t change, she still has her bad thinking in her. He asks her not to accuse him and his wife. He tells that she will spoil four lives by her overthinking. She asks him to use his mind, he isn’t able to control his anger, because his wife is involved in this cheat.

She is angry that Prachi and Siddharth are cheating him. She tells that they are childhood friends, they would have stayed together all life if they had got married, but they got married to other partners. She tells that their relation changed, but her concern for him is still the same. She doesn’t want Prachi to tell the same things to him. She forces her thinking into his mind. He asks her to stop it. She tells that one can’t tolerate the breaking of faith. She challenges that she will prove herself true. Prachi overhears the last thing and asks Rhea what is she saying.

On the other hand, Aaliya tells Tanu that Gaurav wants to give some time to Pragya, maybe she agrees to give the business to him. She doesn’t want Pragya to refuse and make Abhi suffer. She is worried for Abhi. Tanu tells that Pragya has to give away everything if she wants to save Abhi. Pragya comes home and confronts them for working with Gaurav. Aaliya tells that she isn’t with Gaurav, but he called her to inform about the condition. Pragya scolds her for joining hands with Gaurav and putting Abhi in trouble. She tells that she will throw them out this time. Aaliya stops her and begs her for Abhi’s sake. She asks Pragya to meet Gaurav and give him anything he wants, just to save Abhi. Tanu tells that Pragya’s love is tested now. Pragya goes to meet Abhi.

Prachi asks Rhea what truth is she talking about. Ranbir tells that he was saying the truth that Prachi loves him a lot. He talks of their love. Prachi gets smiling. Ranbir tells that he knows it well, that Prachi loves him a lot. Rhea asks him to enjoy Prachi’s love until its there. Prachi tells Rhea that love never changes, love is forever, Ranbir is her priority which will never change. Rhea tells that change is the only constant, Abhi and Pragya were in love before, but now they are separated.

She asks Prachi to decide if their love had changed or their priorities. She goes away, leaving Prachi in a dilemma. Prachi wants to know why is Rhea talking such things. Ranbir can’t tell Prachi that Rhea is doubting her. Prachi meets Abhi and tells him that she prepared his favorite food for him. He asks her not to take extra load. She asks him to have food. She tells that she likes to cook for him. He asks her about the meeting with Gaurav. She asks him to discuss that later. He gets upset and feels like a loser.

He tells that he wanted to help her, but he is helpless himself. She tells that he is her inspiration, she has earned everything just to show him. He asks the reason for it. She tells that she will tell him later. She feeds him with much love. He agrees to have food for her sake. Prachi is much upset because of Rhea. She tells Ranbir that she is feeling bad after speaking to Rhea. She calls Pragya, but the latter doesn’t answer. Ranbir pacifies Prachi with a hug. He finds her unwell and gives her medicines. He asks her to take rest, and leave the work.

Prachi asks Ranbir to never get separated from her. Ranbir asks her not to think wrong things. He promises that they will never get separated. He asks her not to think of Rhea’s nonsense. They have a hug. Pragya tells Abhi about Gaurav’s huge demands. She adds that Gaurav is blackmailing her after framing Abhi. Abhi realizes that Gaurav wants to snatch everything from her. He doesn’t want her to lose anything that she earned by her hardwork. He is ready to stay in the jail, but not become the reason for her destruction. She tells that Gaurav has a proof of his evidence, no one else can help them in the complicated case.

Abhi tells that its time that he becomes a superman and proves his innocence. Abhi kisses Pragya’s hands and asks her to be strong. Sushma learns about Abhi’s arrest. She calls Pragya and informs that she is coming. Pragya tells that she is feeling bad that Abhi is losing courage. She adds that Gaurav has framed Abhi, he has set up this game to snatch their business and companies. Sushma learns Gaurav’s demands. Stay tuned.

Reviewed Rating for Kumkum Bhagya 28th October 2021 Written Update New deceive: 1/5 This rating is solely based on the opinion of the writer. You may post your own take on the show in the comment section below.