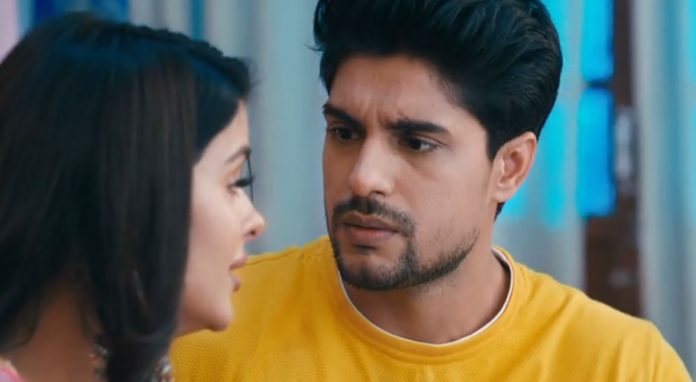 Udaariyaan 28th October 2021 Written Update Fatejo Karwachauth Fateh and Tejo finally get rid of Jass by calling his wife Rukmani and proving Jass as a fraud man. Jass gets arrested, while Jasmin’s truth is still under wraps. Next in the track is the Karwachauth story. Fateh and Tejo leave for the academy to work together as the investors demanded. Fateh has helped Tejo, knowing their relation was challenged by Jass. Fateh tells Tejo about the Karwachauth. He adds that she won’t be keeping it. She tells that she has no reason left now to keep the fast for him.

She doesn’t notice that she got spotted by Tejo, Simran and Mahi, who happen to arrive at the same market place for shopping. Jasmin gets caught red-handed by them. Tejo realizes that Jasmin cares the least for Fateh, and he deserves to know her truth. Will Simran and Mahi reveal Jasmin’s fake fasting truth to their brother? Will Tejo secretly keep a fast for Fateh by all her heart? For whom is Fateh fasting on Karwachauth? Comment your views and keep reading.

Tejo tells the inspector that Rukmani is Jass’ wife since 7 years, they have a child as well. Jass denies to know Rukmani. Rukmani gives him a tight slap. She shows their marriage proof. Tejo asks Jass if he can deny his marriage certificate and his child’s birth certificate. Jass threatens Tejo and Fateh that he will ruin them. Fateh asks him to get lost. Jasmin feels she got saved from Jass. Tejo thanks Rukmani for helping her by going against Jass. She also thanks Fateh. Jasmin shows her fake concern for Fateh. She hugs him in front of Tejo. Tejo wants to leave. She tells that she is going to the police station to free her family.

Fateh asks Jasmin to go home, he has to go with Tejo. Fateh and Tejo save the Sandhus from Jass. The Sandhus return home. They bless Tejo for being so brave. Khushbeer and Gurpreet meet Sandhus. Khushbeer tells that Fateh and Tejo didn’t share the arrest news with him. He asks Tejo why did she hide the problem from him. He gets upset that she has alienated him. Tejo admits her mistake of hiding the matter, just to save him from troubles. She tells him that he is more dear to her than her family.

He tells Sandhus that Tejo is still his daughter, he wants her back in Virk house. He asks Tejo will she not agree to him. Tejo agrees to obey him and return to Virk house. Tejo returns to Virk house and gets a grand welcome by the family. She gets surprised seeing their love. Jasmin wishes Tejo leaves her life soon. Fateh isn’t able to understand the accounts. He seeks Tejo’s help in the academy work. Tejo solves it for him. He thanks her for the help.

He is sorry for everything. He tells her that she would say that she did it to get rid of Jass, but the truth is she has come there to save Jasmin and him. She feels he doesn’t know her well. She asks him to move on. She tells that their marriage is still valid, when she got free from Jass, but their marriage has no existence or any future. She wants to appeal the court for a fast track divorce. She tells him that she will convince Khushbeer. She also wants the family to get happy and rid of all the problems. She tells that Jasmin is preparing to marry him. He replies that Jasmin wants to marry him at the earliest.

She asks his wish. She tells that his marriage is possible when they get divorced. He doesn’t reply her. She understands his reply and tells that they will meet the lawyer tomorrow. He tells her that its Karwachauth tomorrow. She adds that she has no rights to keep the fast for him. She tells that she has no regrets for what she lost. Fateh feels much upset. Tejo returns home. She cheers up Gurpreet for her Karwachauth. Gurpreet is sorrowful thinking of Simran, whose past with Amanpreet isn’t known to them. She tells Tejo that she wanted to give Shringhaar items to Simran, but she doesn’t know if Simran will keep the fast.

Tejo tells her that Simran will keep her fast for the one she loves, Buzo. Gurpreet accepts Simran and Buzo’s relation. Simran overhears them and gets glad. On the other hand, Satti wants to send the sargi to Tejo, who is still married to Fateh. Rupy throws away the shagun. He asks Satti to think of Tejo’s emotions, there is nothing left between Tejo and Fateh. He tells that Tejo wants to get the divorce as soon as possible. He doesn’t care for Jasmin, who ended relations with them. He adds that Jasmin is shameless, she doesn’t love Fateh truly, she can’t be loyal to anyone in her life. He declares her dead for the family.

Jasmin overhears Nimmo and Gurpreet talking about Karwachauth. Biji asks them to eat their sargi. Jasmin tells them that she has kept a fast for Fateh. Nimmo tells that she is no one for Fateh, just Tejo has the right on Fateh even now. Tejo tells that if Fateh and Jasmin love each other, then Jasmin has the entire right to keep the fast. She adds that she doesn’t want to keep the fast and insult it, knowing her relation is soon breaking with Fateh. She tells that they are going to the court to make the divorce process run faster. Fateh feels sad hearing her.

Jasmin tells him that Tejo didn’t keep any fast for him, but they can keep a fast for each other, because their hearts are connected. He tells that he can’t keep the fast, because he can’t tolerate hunger. She insists him to keep the fast. She gets angry on him. He agrees to keep the fast for her sake. She tells that she already got the gift, he will be soon freed from Tejo. She is really happy. Tejo tells Simran that she isn’t well, she will just be on liquid diet all day. She asks Simran to accompany her to the market. Biji tells that Tejo got a reason to keep the fast. Fateh tells them that he has kept a fast for Jasmin. Gurpreet asks him why did he keep it. Tejo, Simran and Mahi hear about his fast. They leave for the market.

Gurpreet knows that Fateh can’t tolerate hunger, but still he is keeping the fast for Jasmin. She asks where is Jasmin. Fateh tells that Jasmin is resting in her room. Tejo, Simran and Mahi find Jasmin having chaat, after lying to the family about her fast. They get angry seeing Jasmin’s cheat. Mahi makes Jasmin’s video to prove to the family that she is a liar. Stay tuned.

Reviewed Rating for Udaariyaan 28th October 2021 Written Update Karwachauth: 3/5 This rating is solely based on the opinion of the writer. You may post your own take on the show in the comment section below.