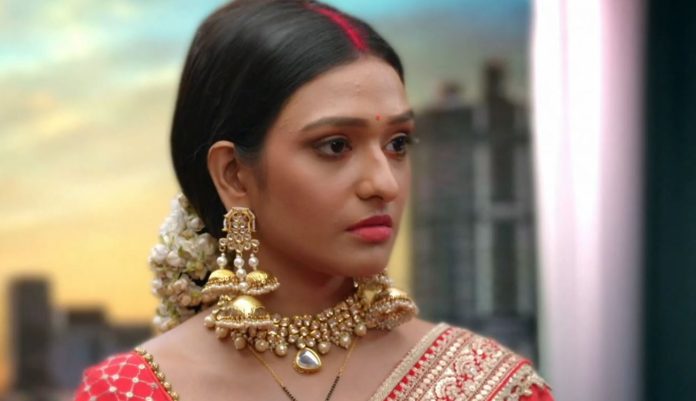 Rishi remembers Lakshmi’s care and concern for him. Malishka tells Rishi that she cannot praise anyone but she can listen to her praises. Rishi asks Malishka to come home for the ceremony but Malishka says that it will be difficult for her to explain to Lakshmi. Malishka says that now they will only do moon’s pooja and next year as she will become his wife they will follow all the rituals. Lakshmi, Neelam, Dadi, and Rano get ready to listen to the Karwa Chauth story. Rano asks Neha to go and sit with Aahana and Devika.

Karishma informs Neelam that the lady priest who was going to come to tell the story is sick and cannot come. Rano says that she has left her area’s pooja and come here. Neelam asks Dadi what can be done. One of the guests says that if the story is not told pooja will not be complete. Dadi asks Neelam to call some other woman but Neelam says that at such short notice nobody will come. Neelam asks the guests if any one of them knows the story and they say no.

Lakshmi says that she knows the story. She asks everyone if they permit her to tell the story. Lakshmi says that she used to sit with her mother and listen carefully so she knows it by heart. Dadi asks her if she seriously knows it by heart and Lakshmi says yes. Neelam permits her. Dadi tells everyone to prepare themselves. Karishma prepares to leave but Dadi stops her and tells to listen to the story even if she is not fasting. Rishi takes Malishka to the jewelry shop and the owner welcomes him. He informs Rishi that he was going to send the gift at his house.

Rishi asks the owner to show him the latest pendant or necklace. The owner asks him to have a seat till then Lakshmi will also come here. Lakshmi tells the Karwa Chauth story and Neelam is impressed. She finishes the story and they do the ‘Thali Ghumana’ ritual. Dadi praises Lakshmi and tells Neelam that because of her nobody’s fast was spoiled. Neha is angry and goes from there. The owner asks Rishi what is the matter and why Lakshmi is not here. Malishka shouts at the owner and says that she has come with him and asks him whether he has a problem.

Rishi says that Malishka has come with him to choose a gift for Lakshmi. He says that Lakshmi has kept a fast for him and that is why he cannot bring her so he brought Lakshmi’s best friend, Malishka with him. The owner shows Malishka the latest piece and she grabs a pendant and says that it is nice. She hands it over to Rishi in anger and tells to pay for it and goes away. Rishi says that it is nice and asks him to pack it.

The owner says that he will send the pendant’s bill along with the gift but Rishi says that it is a surprise so he will pay it here only. Neha is angry at Rano for bringing her here as she has to listen to Lakshmi being praised. Rano tells her she has an idea to break Lakshmi’s fast and Neha says that it will be done. Neha comes running from Lakshmi’s room and Dadi asks her what she was doing there. Neha says that she was searching for Lakshmi only. Neha has done her work as told by Rano and Rano takes Neelam to Lakshmi’s room. Malishka is very angry at Rishi but Kirron asks her to go inside. Kirron says that for pooja Rishi has to wear traditional clothes and she has arranged one for him and Malishka.

Malishka asks her to send it to Lakshmi to take her approval. Rishi and Malishka argue with each other and Malishka goes away angrily. Rano takes Neelam into Lakshmi’s room and tries to provoke Neelam against Lakshmi by asking her if she ate food and didn’t wipe her face. Neha takes out a plate from under the bed having some food and Neelam says that this dish was made today. Neha asks Lakshmi if she ate it. Malishka is cooking in the kitchen when she sees her favorite cake and eats it. After having a few bites she realizes that she broke her fast and what she will tell Rishi now as her fast went futile.

Neelam tells Neha that Lakshmi is fasting and Rano tells Neha to shut up as it is Lakshmi’s first Karwa Chauth fast and she must have eaten due to hunger. Neelam asks Lakshmi if she ate the food. Malishka feels that the cake is very yummy and if the fast is already broken then she can eat a little bit more. Malishka relishes a few more bites of the cake and drinks water too. Neelam asks Lakshmi if she broke her fast and if she had to break it then why did she keep it.

Neelam asks Lakshmi what she has done and does she know how important it is. Neelam asks Lakshmi how can she do that as she boasts a lot about sincerity and asks her if this is her devotion. Rano asks Neelam to forgive Lakshmi as it is the first Karwa Chauth and she must have felt hungry. Lakshmi says that she has not eaten anything and doesn’t know how the plate landed in her room. Lakshmi feels uneasy and Dadi’s friend checks her and tells that she has not broken the fast.

Dadi’s friend scolds Neelam for shouting at Lakshmi for the thing she has not done and asks her to trust her daughter-in-law. Lakshmi tells her to not tell anything to Neelam because if anyone sees the plate they will assume that she has eaten. She tells Lakshmi that if Rishi is Neelam’s son then he is her husband too so she should have trust. Kirron sees Malishka breaking her fast and scolds her. Kirron asks Malishka to eat the cake. She also asks her to have juice and shakes and properly wash her face before coming out in front of Rishi.

Kirron advises Malishka to not let Rishi know that she is not fasting anymore. Malishka feels guilty and Kirron tells her that after becoming Rishi’s wife next year she can keep it seriously. Malishka hugs her mom and tells I love you. Malishka chooses to not go on a guilt trip and eats the cake. Neelam says sorry for reacting and Dadi’s friend tells that she is lucky to have got a daughter-in-law like her. Dadi asks how the plate landed here. Neelam and Lakshmi look at Rano and Neha. Will Rano and Neha be caught trying to trap Lakshmi? Will Rishi come to know that Malishka has broken her fast? Keep reading.

Reviewed Rating for Bhagya Lakshmi 30th October 2021 Written Update Innocent Lakshmi: 3/5 This rating is solely based on the opinion of the writer. You may post your own take on the show in the comment section below.