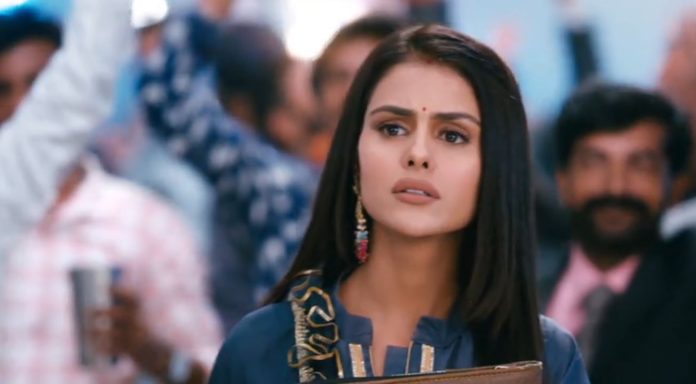 Udaariyaan 30th October 2021 Written Update Tejo meets Angad Tejo arrives to meet the financer Angad Maan. She finds him dancing in the crowd, and showing some stunts. She doesn’t think the person dancing and entertaining the crowd can be Angad Maan. When she asks a guy about Angad, the guy points towards Angad, and leaves Tejo confused. Tejo awaits Angad there, while watching his dance performance. She goes to ask him about Angad Maan, when he asks her what work she has with him. She tells him that she has a meeting with Angad, not him. She is sure that he can never be the rich businessman Angad. She scolds him for not valuing anyone’s time. She tells him that Angad has called her at 11 am, and its over an hour now.

Angad doesn’t tell her then that he is Angad, and enjoys the drama. Tejo then goes to Angad’s house to meet him. She finds him making an entry while attending an important call. Angad tells that he doesn’t care for any amount, he just wants the best for the country and state. He wants his work done any how. Tejo gets impressed seeing the day he deals in his business. Once he makes the tab off his face, she gets to see his face, and realizes that he is the same guy she met the other day. She can’t believe his dual avatars, of a carefree, joyful person and a debonair businessman.

Earlier in the show, Tejo shares her happiness with the Virk family. She tells them that she was finding a financer since a long time to get rid of their loans. She informs them about the meeting with the new investor. Khushbeer praises her. Tejo asks Fateh to handle the academy if the investors come for inspection. He assures to accompany her. Jasmin tries cute things to apologize to Fateh. She sheds some tears and convinces him. He ends his annoyance. He asks her to go home, since he can’t convince the investor alone. He praises Tejo who really works hard for the academy, without claiming anything. Tejo goes to meet the investor, Angad Maan. She finally meets Angad, who appears a very fun loving person, dancing on the music.

Angad is seen in a very light mood, while he enjoys the animal race with his favorite rooster. He feels his pet has won and it was destined. He dances with his people. Tejo is left amazed seeing him. Angad learns that Tejo has come to meet him regarding the academy investment. He goes to meet her, but she doesn’t think he is Angad. Tejo speaks to his manager, and then meets Angad. She tells that she doesn’t have to meet him, but Angad. She introduces herself. Tejo tells him that she is waiting since an hour to meet Angad. He tells that Angad is busy. He plays along knowing she didn’t identify him till now.

She threatens to complain to Angad about his irresponsible and useless staff. He asks her to better wait for Angad in the office area. Tejo goes to the office to meet him. Tejo waits for Angad, while he makes an entry talking to his client. She is stunned to know that the guy she met just now is Angad. Angad introduces herself. He meets her in his formal avatar and leaves her speechless. Angad presents himself and his perception towards life in a way that she gets too impressed by his thoughts.

He tells her that one should enjoy life in every moment, and celebrate as it comes. He likes to be himself when he is away from his busy work schedule. He further adds that he is interested in investing in her academy. Tejo leaves him impressed by a remarkable presentation. Angad and Tejo get into a moment, when she slips on the floor and seeks his help to balance herself. Angad seems to like her business skills. Tejo too appreciates how he has self-built himself into a big business tycoon. Angad tells her that he is likely to invest in the academy, but would like to come once for inspection.

Tejo asks him to come any day and see it himself. Tejo returns home and tells the Virk family about Angad’s strange funny personality. She is really hopeful that Angad will bring a big change in their lives and also fate. Seeing Tejo pinning hopes on Angad, Fateh too hopes that all their problems get sorted with the big investment from Angad. While the family rejoices on Angad and Tejo’s successful meeting, Jasmin comes to shock them by declaring her engagement with Fateh.

Fateh tells that he didn’t discuss anything with Jasmin till now. She adds that they don’t need to discuss anything, because she knows his divorce with Tejo will be happening soon. Khushbeer decides to not let any engagement happen. He tells that Tejo is Fateh’s wife, and their divorce isn’t done yet.

Khushbeer tells Fateh that even if he decides to get engaged with Jasmin, then none from the family will be a part of it. Tejo’s parents come home and learn Jasmin’s rush for the engagement. They also don’t want to become a part of her madness. They just worry for Tejo. They wish Tejo’s happiness. Both the families condemn Jasmin. Fateh also rebukes Jasmin for rushing so much, when she can see the situation in the house. Jasmin tells that she can’t wait more for their marriage.

Tejo and Fateh await Angad at the academy. Angad meets the boxers and gets into a fight himself to see how strong they are. He really likes the academy and trainees. Angad’s cool behavior and friendly side towards Tejo gets realized by Fateh, who slowly gets jealous seeing their bonding. Angad tells Tejo that he is ready to invest, he can make the academy as big as she wants. He asks her to throw a big party where they will be declaring their partnership. Tejo is really happy that Fateh’s problems will end.

Angad tells them that they have to make the party arrangements themselves, and make it rock. He makes a leave from there, making Fateh further think about him. Fateh likes to see Tejo smiling. Fateh and Tejo get busy in planning the party for Angad Maan. Jasmin sees them getting the support from both the families. She wants to get engaged with Fateh in the same Diwali party. Stay tuned.

Reviewed Rating for Udaariyaan 30th October 2021 Written Update Tejo meets Angad: 3/5 This rating is solely based on the opinion of the writer. You may post your own take on the show in the comment section below.