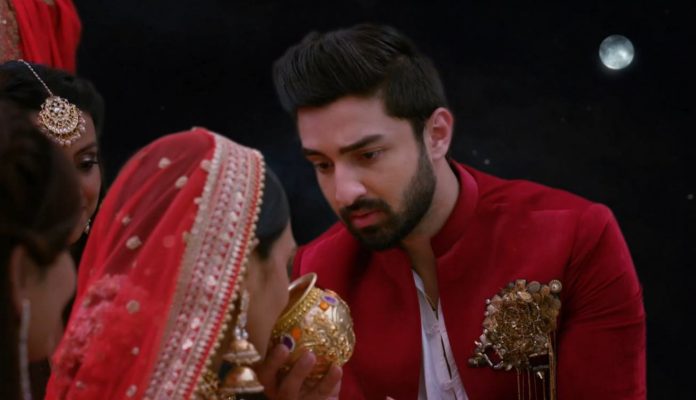 Bhagya Lakshmi 1st November 2021 Full Written Update Romance Dadi questions Neha about visiting the room. Rano tells that Neha has no idea about Lakshmi’s room. She lies to Neelam that they have to prepare for the puja, they will be leaving for home soon. Neha blames Ayush. She tells that maybe Ayush had eaten the food and left the plate. Rano tells that Ayush and Neha are matching, their habits are same. Dadi asks Rano to perform the puja at their house. Rano tells that her husband will be coming home from office. She makes an excuse to leave fast.

Kiran asks Rishi not to pamper Malishka so much. Rishi tells her that he is having a headache because of dehydration, he just wants to break the fast soon. Malishka burps and lies to him that she is on an empty stomach. Kiran asks Rishi and Malishka to go and get ready fast, since the moon sighting is just close. Lakshmi tells Karishma that she will work on Karwachauth any how. She adds that family never has any fights. She tells that she just wants to work for the family’s betterment.

Sonia and Ahana get into an argument because of Lakshmi. Lakshmi gets to see the Karwachauth’s moon. Neelam asks Virender to not joke about the moon. He calls Rishi for Lakshmi’s sake. Rishi tells Malishka that he didn’t eat anything since morning. He taunts her for having the food already. The moon doesn’t appear when Neelam gets desperate to break the fast. Karishma asks Neelam to take rest until the moon appears. Malishka lies to Rishi that she didn’t have any food.

Rishi tells that her behavior is so calm, like she already had the food. She tells that she is also feeling hungry, she isn’t showing him, how weak she is feeling right now. She hugs Rishi and asks him not to get frustrated. Virender asks Lakshmi not to work so much, and take rest until the moon appears. He tells that he doesn’t want her to tire herself, she is keeping a fast, everyone who kept the fast are just relaxing there. She apologizes to him. He scolds her in a cute way. Ayush brings some fun in the boring function, by dancing on the dhol beats. Dadi also dances with the family. Lakshmi faints down while awaiting the moon.

The family panics for Lakshmi. Rishi tells Malishka that the moon is finally out, they shall break the fast. Neelam calls Rishi and asks him to come home immediately to break Lakshmi’s fast. She informs him that Lakshmi fainted. Rishi leaves Malishka and runs away. Malishka gets too upset. Rishi reaches home. He finds Lakshmi lying unconscious. He feeds her the water and breaks her fast. He completes the Karwachauth rituals with Lakshmi. Karishma records the video capturing Rishi and Lakshmi’s fast rituals, and sends it to Malishka.

Neelam guides Rishi about the further rituals. He feeds her the sweets. The family gets glad that Lakshmi has completed the fast with total devotion. The old lady asks Rishi to always keep Lakshmi happy, their pairing is made in the heaven. Neelam instructs Lakshmi to break Rishi’s fast by feeding him the water and sweets. Lakshmi and Rishi have a romantic moment. Malishka cries on being left alone. Lakshmi breaks Rishi’s fast. He gets worried thinking Malishka is waiting for him. Lakshmi doesn’t let him go. He makes an excuse to leave. He reaches Malishka’s house to break her fast. Malishka gets angered and ruins the Karwachauth plate. She tells him that he lied to her and left her. He asks her to understand, he had to go home on Neelam’s call. She confronts him for going for Lakshmi’s first Karwachauth. She feels insecure that she has become secondary for him, he cares for Lakshmi more than her. She shows him the video sent by Karishma. He gets speechless. Keep reading.

Reviewed Rating for Bhagya Lakshmi 1st November 2021 Full Written Update Romance: 4/5 This rating is solely based on the opinion of the writer. You may post your own take on the show in the comment section below.