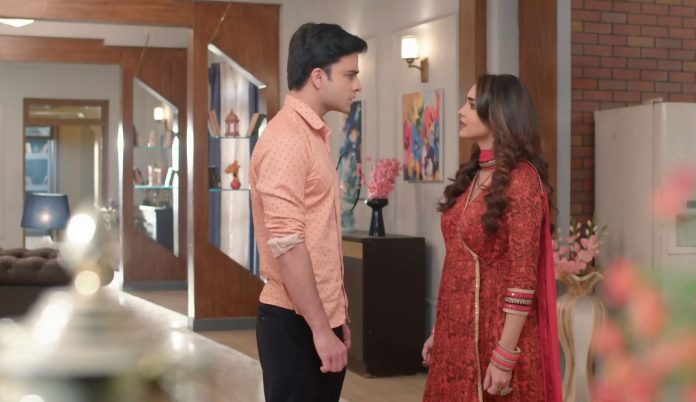 Kumkum Bhagya 1st November 2021 Written Update Confession Rhea tells Ranbir that the entire Kohli family will be embarrassed because of his decision, because he knows the truth, and still he is turning blind towards it. Ranbir calls it enough. He tells Rhea that she is crossing her limits. She tells that she didn’t cross her limits, he isn’t aware of what it actually means. She tells him that she can do anything for her true love. She shocks him by professing love to him.

Gaurav tells Aaliya that Abhi isn’t getting punished for being a culprit, but because of his innocence. He is getting punished due to Pragya’s rigid decision. He asks Aaliya to wait for some time and then see how the judge punishes Abhi by declaring the verdict. He tells that they shall see if Abhi gets an imprisonment or death sentence. He doesn’t think anyone can save Abhi now.

Aaliya gets worried for her brother, when she finds the judge declaring Abhi guilty. She wants to stop the judge from declaring the verdict. Pragya goes to the police station to meet Abhi. He tells her that he is really glad to be her inspiration, and receive the credit for her success, but he will not be able to live if he becomes a reason for her destruction. Abhi is troubled seeing the lawyers having a war of words. He is left shocked in the court when the judge declares him guilty in the case. How will Pragya save Abhi from the wrong blames? Will Aaliya help out Abhi this time? Comment your views. Keep reading.

Gaurav meets Pragya outside the police station. She asks him why did he cheat her by sending her a one-time view format video. He tells her that she knows what to ask him. He taunts her on seeing her pale face. She asks him why did he do this, when he got what he wanted. He tells that he has taken his revenge by snatching everything from her, but he needs his revenge on Abhi, who insulted him and raised hand on him. He tells that he never loses any battle, he isn’t Aaliya or Tanu who get happy on a little victory. She tells that she was in a hurry to take Abhi home, so she has lost to him.

She adds that she has defeated him in the business before. She asks him not to underestimate her, she can ruin the entire world if she decides to take up the Durga Avatar. She tells that she is a good businesswoman, but a better wife. She tells that a wife can ruin a devil who eyes her Kumkum. She threatens him that she will ruin him, she is Abhi’s wife, she will prove Abhi innocent in the court and take him home. She throws a big challenge to him. Gaurav feels tensed by her threatening.

Pragya goes home. She works all night to find a way to save Abhi. She rushes to the police station to meet Abhi in the morning. She pleads to the inspector to let her meet Abhi once, he is innocent and needs justice. Inspector gives her a fair chance. She meets Abhi and tells him that he has to go to the court in some time. He knows it well. He tells that he knows that she has tried well. He adds that they can’t prove his innocence. She asks him not to lose courage and hope. He tells that he knows that the contractor is lying, but they can’t prove the truth. He knows that he will be taken to the jail from the court.

He wants to tell his feelings to Pragya to relieve the burden. He reveals that he had come to her house to ruin her peace, he had revenge on his mind, but he didn’t do anything. He feels guilty. She asks him if he has to tell anything else. He shares his little cute things driving his guilt high. He tells that she didn’t wish the good for her, by staying in her house. He asks her to vent out her hatred for him. He confesses that he loves her a lot, that he couldn’t do wrong with her. He is ready to bear any punishment. She asks him if he doesn’t want to meet her or see the face. He tells that he will get jailed, he won’t be able to see her again. Pragya asks Abhi to check the file once and tell her.

Abhi hugs her and cries. He feels its their last hug. Inspector gives them a moment. He asks them to come to the court. Abhi apologizes to the court. Pragya asks Abhi if he has seen some guy at the construction site. Abhi tells that he had seen him that day. She gets an evidence. She calls Gaurav. He tells her that he will become her partner once Abhi gets jailed. She asks him to come to the court and attend the hearing, its going to be fun for him. Gaurav asks Subhash to reach the court and give the statement against Abhi. He wants to know why did Pragya sound so confident. Pragya tells that Gaurav will be getting punished in the court, after all he has challenged Abhi’s wife.

On the other side, Prachi wakes up late and panics. Ranbir leaves his important meeting. He takes care of Prachi. She asks him to get ready and leave for the meeting. He tells her that her health is most important. He asks her to have the food by her hands. He tells that he has made the breakfast for her. She gets emotional knowing he had been awake all the night. He tells her that he finds life going fine when he sees her smiling. He loves her a lot. He tells that he can never love anyone else. He tells that he doesn’t like to see her ill, which stops his life. She asks him not to even think of anyone else.

She tells that she loves him a lot, she doesn’t like to see him with anyone else. He tells that he just belongs to her. Siddharth also takes care of Prachi and brings sheera for her. Ranbir asks him how does he always come in between them. Rhea comes there and tells that Siddharth never prepared anything for her till now, he is just caring towards Prachi. Siddharth tells that Prachi made sheera for him once when he had caught cold, she had taught him to make the sheera. He adds that Ranbir wasn’t at home that day.

Ranbir tells Prachi that he will make kada for her cold-relief. Rhea laughs seeing Prachi and Siddharth’s friendly banters. Ranbir goes to make the kada. Abhi meets Aaliya and Tanu at the court. Tanu tells that she believes that he will get freed today. Abhi asks her if she had bribed the judge. He doesn’t want her assurance. They get seated in the court. Tanu asks if Gaurav is coming to the court. She fears that he will cheat them. Gaurav meets them and tells that he doesn’t cheat his own team. He wonders where did Pragya go after inviting him. Abhi gets accused for the wrong decision. He is held responsible for the building collapse, which resulted in the death of six people. The lawyers have a debate on the case.

Moreover, Subhash reaches the court to testify against Abhi. He lies in the court. Abhi knows that Subhash is bribed by Gaurav. Subhash tells that Abhi wanted to get those poor people killed, he is heartless and doesn’t care for any innocent lives. Abhi defends himself. He tells that Subhash is lying. He pleads that he is innocent. He tells the reality. Abhi fails to prove anything. The judge asks Abhi to answer the lawyer. The lawyer wants Abhi to prove himself right by presenting a proof in his favor. Abhi waits for Pragya. Gaurav thinks he is close to his victory. Keep reading.

Reviewed Rating for Kumkum Bhagya 1st November 2021 Written Update Confession: 2/5 This rating is solely based on the opinion of the writer. You may post your own take on the show in the comment section below.