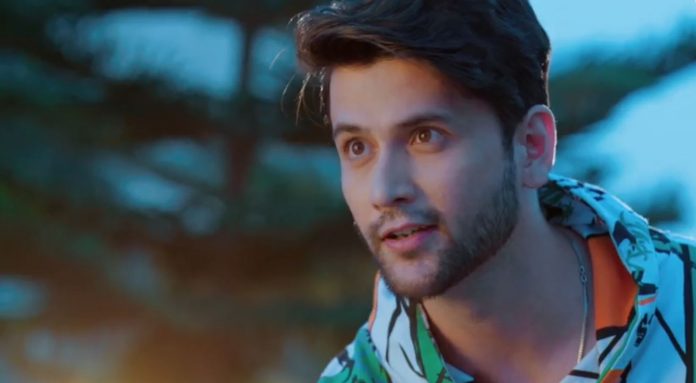 Sasural Simar Ka 2 1st November 2021 Written Update New entry Aarav feels Simar has left his life, and took away all his hopes and dreams. He isn’t the same Aarav now. He feels lifeless without Simar. He applies the ashes of their gathbandhan to his face. He feels his soul also left with Simar. He imagines Simar with him. Simar encourages him to move on. He wants to hold her once. She tells him that its not possible for them to meet again. He tells that she belongs to him, she has to come back to him. Simar motivates herself that she had to rectify her mistake. She gets Aarav’s call. She doesn’t want him to make her situation more tense.

She doesn’t answer his call and leaves him restless. Aarav wants to hear her voice once. He calls her until she answers. He asks Simar if she is okay. She tells that she was busy. She asks him not to act concerned, since she isn’t his responsibility. Aarav asks her not to talk like they have nothing between them. Simar finds him falling weak. He tells that she will always be his responsibility. She disconnects the call. He regrets about the separation. Simar changes her clothes. She gets back to her normal look. On the other hand, Lalit apologizes to Roma for doing wrong with her. He asks her to scold him if she wants.

Roma decides to drink the poison and kill her life. She finds Lalit losing his cool and getting embarrassed by her. She gets angered that he slapped her in front of everyone. He tells her that if she just knows to complain, then its better that she stays locked. She consumes the poison. Aarav has ended his ties with Simar by following Badimaa’s order. He misses Simar every moment. He gets to see Simar’s signs. He realizes that he couldn’t value her when he had her in his life. He feels he really needs her. He regrets that he didn’t realize his love before. He learns from Aditi that Vivaan is in the hospital. He asks her who told her.

Rana asks him to control his anger and leave the city for a few days. The Oswal family rush to the hospital to meet Vivaan. Chitra slaps Reema in rage. She blames Reema for Vivaan’s serious condition. She asks Reema if she is taking revenge on Vivaan. Giriraj asks Chitra to calm down. Inspector tells Badimaa that Vivaan was attacked. Badimaa asks him to catch the culprit and bring the truth out. Aarav and Aditi also arrive at the hospital to see Vivaan. Aarav tells Inspector that he will not spare the attacker, if anyone happens to his brother.

Gajender asks him to control his emotions. Gagan wants to send the video to Aarav. Doctor informs them that Vivaan is stable after the operation. He asks the family to see him. Chitra stops Reema from seeing Vivaan. She asks Reema to stay away from her son. Reema doesn’t obey her. She tells that Vivaan is her husband, and none can stop her. Aarav wonders who has attacked Vivaan. Badimaa asks if Vivaan is out of danger.

Doctor tells them the possibility of a coma if Vivaan doesn’t get conscious soon. He adds about the second attack on Vivaan. Simar gets worried for Aarav. Later, Yamini seeks help from Aarav. She asks him to become an angel for Simar and produce her music album. Aarav is ready to do anything for Simar’s happiness. He agrees to Yamini’s request. A new guy enters Simar’s life to work with her on the new music album. He meets Simar as a helpful stranger and soon befriends her.

Chitra accuses Reema for not informing them about Vivaan’s state. Reema tells that she can’t give any explanation to them. Aarav wants to find the attacker’s identity. Gagan thinks to tell everything to Aarav. Badimaa finds Aarav’s hand bleeding. Aarav is just concerned for Vivaan. Badimaa tells that she can’t see him shattering like this. Aarav tells that Vivaan went there because of him. He wanted to be there in Vivaan’s place. Aditi stops Gagan from going to her parents. She misunderstands his arrival. She asks him to never show his face again. She makes Gagan leave. Badimaa worries for Vivaan.

The entire family prays for his recovery. Aarav feels he has lost Simar, now he can’t lose Vivaan. He realizes that Vivaan has taken the danger on himself. He swears to not spare the attacker. Badimaa realizes that Vivaan’s serious condition is a result of ousting Simar from the house. Gagan calls up Aarav to meet him outside the house. Aarav doesn’t answer his calls. Gagan messages him and sends him the video of Mohit and Rana’s conversation. Simar arrives at the hospital. Her parents are much worried for Simar’s future.

They are scared to think of Simar’s lifelong journey to be spent alone. Indu tells that they have to give wings of freedom, hope and happiness to Simar. They have to help fulfill Simar’s dreams. She tells that they will become Simar’s courage, they will await a miracle to happen in Simar’s life. Simar steps in the ward. A miracle happens, and Vivaan gets his heartbeat back. The family gets surprised and relieved. Aarav doesn’t see Simar there. Badimaa casts her anger on Reema. Simar feels glad hearing that Vivaan is okay.

Aarav meets Vivaan. He confronts him for putting himself in danger. He asks Vivaan if he has seen the attacker. Vivaan has no idea about Mohit. Chitra asks Vivaan to recover and come back home. Aarav wants to know who has dared to attack Oswals. He tells Vivaan that he swears to punish the attacker. Vivaan can’t tell him that he suspects Chitra’s involvement as well. He sends Chitra away. He tells Aarav that someone shot at him, then he got attacked by some goons. He thinks Chitra already knew about the planned attack. He feels ashamed of Chitra. Badimaa questions Reema for informing Vivaan so late when he was attacked a day before. Reema tells that Vivaan’s safety and recovery were her priority.

She tells that she didn’t had time to inform them, she got into a fight with the attacker. Aditi thanks Reema for saving Vivaan’s life. Badimaa wants to find out their new enemies. Reema tells that they can check the cctv footage. Badimaa asks Gajender to find out the truth. Giriraj tells Chitra that he had called Rana to ask him how dare he shot Vivaan, but Rana is threatening to expose their truth to the Oswal family. He tells that Rana has the recordings of the phone calls, when they had planned to kill Aarav.

He tells her that they will lose everything if Badimaa investigates the matter and reaches Rana. She tells that they will deny the blames and not let their secret come out. Gagan tries contacting Reema. Vivaan gets glad to meet Simar. He asks her why isn’t she dressed as Oswal bahu. Simar tells Vivaan that this had to happen. She makes prayers for Vivaan’s recovery. Simar asks Vivaan to take care of himself, now she isn’t in the Oswal house. Aarav watches her sadly. Keep reading.

Reviewed Rating for Sasural Simar Ka 2 1st November 2021 Written Update New entry: 3/5 This rating is solely based on the opinion of the writer. You may post your own take on the show in the comment section below.