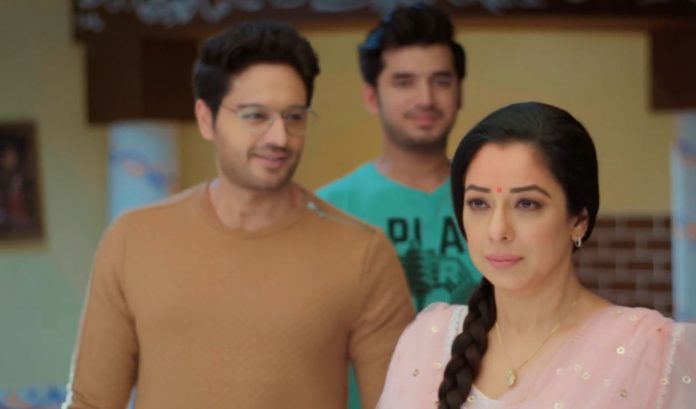 Anupama 1st November 2021 Written Update New story Anupama walks on the road alone and reaches a park to calm herself down. Anuj is seen searching for her. While sitting on the bench, Anupama witnesses Lord Krishna in their child form. He asks Anupama if she is sad? Lord Krishna again asks her the reason for being sad. He hugs Anupama. Anupama cries recalling Vanraj and Baa’s accusations and ill words. On the other side, Bapuji is seen performing pooja with the rest of the family.

The Child in Lord Krishna’s get up again makes Anupama smile by his cute talks. Soon his mother comes to the park to take him back. The child is seen as the son of a muslim woman, who gave Anupama the strength in Lord Krishna’s outfit. At shah house, Bapuji lights the eternal flame and indirectly curses the members of his family for humiliating Anupama. He takes the oath in front of God. Mamaji plays the shunk. Anupama drinks water from a public drinking tab. Anuj feels relaxed that Anupama will now live in her own mother’s house. He thinks Anupama will now have a place to live peacefully with people who truly love her.

Samar sees Anuj and asks him what he is doing here. He asks him about Anupama. Anuj replies to Samar and tells him that he saw Anupama going to her own mother’s house. Samar feels relaxed about it. Anuj asks Samar to take care of Anupama and requests him to not tell Anupama that he was looking for her. Samar requests Anuj to once meet Anupama as a person needs a friend too more than his/her family. Anuj gets into thinking. Anupama reaches her own mother’s house. Her mother hugs Anupama and says Samar told her everything. Anupama requests her to not discuss it then. Her mother praises her for her decision.

Anupama’s mother explains to Anupama that women get habitual of tolerating ill behavior. She tells Anupama that she is proud of her for fighting for her self respect. At shah house, Nandini tries making Bapuji eat food. Bapuji refuses to have food. Vanraj requests Pakhi to try making Bapuji eat the medicine. Anupama asks her mother if she really feels that she made the right decision. Her mother says that she is not like those mothers who blame their own daughters for others’ mistakes. She gives various examples to Anupama of how mother’s feel forced to explain to their daughters to tolerate everything ill. Her mother tells Anupama that she learnt to become a good mother from her own daughter (Anupama).

Anupama’s mother tells her that she can now confidently say that her daughter is right in her decision. Anupama hugs her mother and thanks her. She even thanks Lord Krishna for giving her a good mother, kids like Pakhi and Samar, daughter-in-laws like Kinjal and Nandini and a friend like Anuj. At the same time, Samar reached Nani’s house with Anuj. Back at Shah house, Kavya tries instigating Vanraj saying that it was Anuj and Anupama’s plan to live separately. Vanraj asks Kavya to forget everything and focus on family’s responsibility.

Vanraj asks Kavya to make sure that his family doesn’t miss Anupama. Samar tells Anupama that he told Anuj everything and forced him to meet her. Anupama asks Anuj to not apologize as he is not wrong. She says to Anuj that other people’s thinking is wrong. Anupama further tells Anuj that for years she made the same mistake of taking others’ mistakes and blaming herself. She asks Anuj to see that due to her being a sacrificing person in the past, she got nothing except accusations and ill treatment.

Anupama tells Anuj that she doesn’t fear anything when so many people are there in her support. Anupama’s mother and brother thanks Anuj for being good with Anupama and supporting her professionally. Vanraj on the other side decides that he will not forgive Anupama and let her return even if she pleads with him some day. Back at her house Anupama feels relaxed and explains to Anuj that she is happy that now she will live peacefully in her own mother’s house. She further says that now she just has to grow professionally. Anupama says that she will not stop Samar’s life for her.

Anupama’s mother, brother and Samar say to Anupama that they will always be there for her. Anuj tells Anupama that his company provides a house to their employees but not to partners. Anupama tells Anuj that she will manage. Anuj asks her to ask for help anytime if she needs it. He thinks of poetry in his mind and feels happy for Anupama. Anupama in her mind explains to herself that she needs to grow for herself now anyhow.

In the next episode, Anupama will find it difficult to get a house for her and Samar being a single mother. On the other side, Kavya will instigate Baa telling her that Anupama with Anuj’s help will take revenge from them. She will explain to Baa that first they need to get Anupama’s name out of their house papers.

Reviewed Rating for Anupama 1st November 2021 Written Update New story: 4/5 This rating is solely based on the opinion of the writer. You may post your own take on the show in the comment section below.