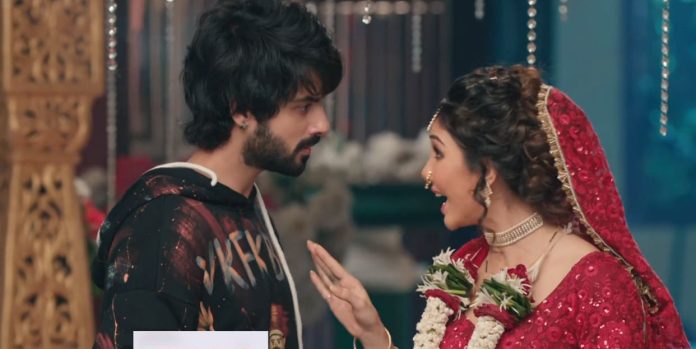 Yeh Hai Chahatein 1st November 2021 Written Update Rudra marries Mishka Rudra asks Mishka how dare she think that he will marry her. Mishka asks Rudra to calm down. She explains to Rudra that their marriage will just be a compromise. They will live separate lives and not interfere in each other’s life. She explains to Rudra that she just needs to be sure that she will live a secure and rich life. Mishka tries explaining to Rudra that only by marrying her will he get her help. She tells him that he will get Sanya only this way. Mishka asks Rudra to see destiny’s game that in the past he refused to marry her for Prisha and now he has to marry her (Mishka) for Prisha.

Rudra calls Mishka an idiot for thinking about marrying him. He makes her remember whatever bad she did with him, Prisha and their little Saaransh. Mishka asks Rudra to understand that their marriage will not be bound by love and they will live separate lives. Rudra tells Mishka that he feels like killing her. Mishka tells Rudra that this is the reason she wants to marry him legally, to guarantee her safety and good lifestyle. She asks him to make a final decision, if he wants to clear Prisha’s name and give a good life to Saaransh.

Meanwhile, Armaan’s goons ask Prisha to pack her things. Prisha questions them and they reply that Armaan told them that they are leaving. Prisha asks the goons to call Armaan as she needs to talk to him. Goons tell Prisha that they are not allowed to call Armaan. This makes Prisha angry. Armaan thanks someone on the call for arranging tickets so early. He thanked God that he got the tickets for the next day. He feels happy thinking that now he will live with Prisha alone abroad. Armaan even thinks that he will send Anvi to a boarding school and not let her know that Prisha is alive.

Prisha creates a ruckus in the home she is living in. Armaan’s goons inform Armaan that Prisha is breaking things in anger. Prisha takes the phone and asks Armaan if he thinks that she is his puppet? Armaan asks her what happened? Prisha gets angry at Armaan for not asking her before booking her tickets for abroad. She asks him what his relationship with her is and that he is taking her life’s decisions. Prisha refuses to go anywhere with Armaan. Armaan tells Prisha that Inspector Chautala is in doubt that she is alive and is thinking of reopening her case. He tells Prisha that he is doing everything just for her.

Armaan makes Prisha emotional and makes her ready to leave with him. He disconnects the call and gets happy thinking that Prisha is an emotional fool. Prisha thinks that she needs to do something before leaving India. Moreover, Sharda finds Rudra upset. Rudra profusely cries in Sharda’s arms. He tells Sharda that Mishka asked him to marry her in exchange for her help in proving Prisha innocence. Sharda asks Rudra to ask Mishka to show him the proof first. Rudra asks Sharda if Mishka shows him the proof then should he marry her?

Next morning, Rudra bails Reshma out of prison. Reshma thanks Rudra for helping her. Mishka tells Reshma that Rudra is marrying her. Rudra says first he needs the proof of Sanya being alive. He tells Mishka he has lost much in his life and can’t trust her easily. Rudra asks Mishka tk make a decision. Mishka asks for some time from Rudra for bringing the proof. Rudra leaves from there. Mishka asks Reshma to ask Sunil for Sanya’s video with a date on it. She explains to Reshma to do what she asked for, if she doesn’t want to return to prison.

On the other side, Sanya is seen alive and irritated as Armaan has made her and Sunil live secretly in hiding with no TV and mobile phones. Suddenly Sunil’s mobile phone vibrates and he goes to the washroom to attend Reshma’s call. Sunil tells Reshma that Armaan asked him to hide. In Mishka’s words, Reshma tells Sunil that they can become rich by her friend’s help. She asks him to send a video of alive Sanya with a present date on it. Sunil gets scared and calls Reshma an idiot, saying that Armaan will kill him for doing so.

Reshma tells Sunil that nothing like this will happen. She makes Sunil agree to send Sanya’s live video. Reshma asks Mishka if she will give her money for her work. Mishka promises to do so once she marries Rudra. Digvijay gets shocked to know that Armaan is leaving for abroad. Both Armaan and Digviyay get angry at each other. Armaan asks Digvijay to handle Anvi till he calls her abroad too. He thanks Digvijay for everything.

Armaan calls Prisha and asks her if she is ready to go as he will pick her up after a meeting. Tensed Prisha says that she is ready. Mishka and Reshma get happy after receiving a video of Sanya being alive. Rudra and Sharda think Mishka and Reshma ditched them. Mishka reaches Khurana Mansion and greets Sharda. She shows Shada and Rudra, a video of alive Sanya.In the next episode, Armaan will make Prisha misunderstand Rudra by showing her Rudra and Mishka’s wedding. As per her promise Mishka will take Rudra to alive Sanya, who will get shocked seeing Rudra in front of her.

Reviewed Rating for Yeh Hai Chahatein 1st November 2021 Written Update Rudra marries Mishka: 4/5 This rating is solely based on the opinion of the writer. You may post your own take on the show in the comment section below.