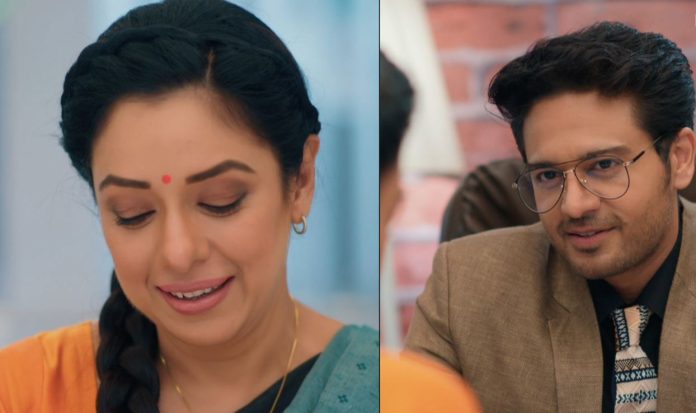 Anupama 2nd November 2021 Written Update Shocker for Anu Kavya serves dinner to the shah family. Vanraj asks the shahs to cheer up as they can’t remain sad for anyone. He requests his family to be happy as Diwali is near. Kavya blames Anupama for upsetting the whole family and living with Anuj. Bapuji doesn’t like it and leaves the food as it is. Pakhi, Nandini and Mamaji too leave without eating. Paritosh asks Kavya why she spoke against Anupama even being aware of everyone’s bad mood. He asks Kavya to give everyone 4-5 days to get back to normal routine.

Baa says Bapuji will not change. She blames Anupama for taking away the family’s happiness and Bapuji. Anupama on the other side thinks if Bapuji would have eaten dinner and taken his medicines or not? She also thinks if Pakhi would be playing video games or not? Anupama then tries to relax herself by thinking that Kinjal and Nandini are at Shah house to take care of everything. She tries to leave thinking about shah house. Anupama’s mother comes to sit with her and inform her that Samar, Bhavesh and Nihal (Bhavesh’s son) are sleeping on the roof under the mosquito net.

Anupama says that after her Mehendi ceremony, she is having a sleepover for the first time in her mayaka in the last 26 years. Her mother asks what is a sleepover. Anupama explains when a person stays with his/her friends, it is called sleepover. They discuss that they are feeling happy with each other. Anupama’s mother pacifies her daughter in her arms and hug. They reminisce about happy old days and laugh happily. Anupama’s mother and Samar ask Anupama to wake up. Anupma for the first time wakes up a little late. Samar informs Anupama that it’s Dhanteras and she has to start a new life from today.

Anupama wakes up and prays to god for the well being of shahs. She also wishes to get her own before diwali. At Shah house, Baa tries to stop Bapuji from making tea for himself. Baa blames Anupam for taking away Bapuji and the family’s happiness. She says to Bapuji that she considered Anupama as her daughter and even went against Vanraj for her. Baa also says that she changed herself and her thinking for Anupama who left her and him for a stranger. She continues blaming Anupama for being selfish. Bapuji says it would have been good if Anupama would have got married to Anuj instead of Vanraj earlier.

Kavya hears everything from behind and Bapuji walks away. She tells Baa that since yesterday she is thinking something important about the house. On the other hand, Samar packs Anupama’s bag for the office. Her mother gives her the tiffin for her, Anuj and GK. Samar informs Anupama that he had a conversation with the broker about finding their new home. Anupama asks him to keep a meeting time between her dance class and office. Her mother asks her to stay with her but Anupama reminds her mother her reason for living separately. She even worries when Anupama says that she will continue teaching dance in the same academy.

Anupama tells her mother that dance academy is her temple and she left her home but cannot leave her temple. Her mother asks her to let Samar and Nandini handle the dance academy and not see Vanraj’s face again. Anupama’s mother tells Anupama different ways to reach her workplace to avoid the shahs. Anupama says she is not wrong and does not leave her colony. She smiles thinking of seeing Bapuji, Pakhi, Nandini, Kinjal and others. Her mother gets upset and tells Anupama that she never listens to her.

Kavya tells Baa that they need to keep their house safe from Anuj and Anupama. She instigates Baa telling her that till Anupama has a share in their house they are at risk. Kavya says to Baa that Anupama will surely take revenge from them. She tries to explain to Baa that if someone gets power in their hands they change. Kavya asks Baa to think about how to get Anupama’s name out of their house papers. On the other side, Anupama tries cheering up her mother by performing a cute dance on a cute hindi song. Her mother cheered and hugged her. Anupama leaves for work.

Anupama with Samar sees a rental house. She finalizes the house and amount payment with the owner. Owner asks Anupama about her family who will be living in his/her property. Anupama says she will live with her son. Owner will ask Anupama about her husband. Anupama reveals about her and Vanraj’s divorce. Owner tells the dealer that she can’t give a single parent her house. She doubts Anupama’s character. This angers Anupama and she takes a stand for herself. She tells the owner that she can’t raise questions on her character.

Anupama explains to the owner that not every woman has the hobby of living alone. It can be that woman’s helplessness. She further tells the woman that nobody has the right to question a woman’s character without knowing her. The owner of the house says that a lone woman travels here and there anytime and wears anything. She asks the owner that a woman working in night shifts, call center and is an air hostess should resign from her job then for society’s sake? The owner says the person who lives alone does something wrong. Anupama asks the owner why she thinks that single person does wrong work?

The owner of the house calls single people ill mannered and shameless. Anupama asks the owner if she too was ill mannered and shameless before marriage? She asks the owner to change her thinking to change the society. Anupama leaves from there and Anuj is seen waiting for her. He hears Anupama stamping papers with anger. Anuj asks her why he is so angry. Anupama asks Anuj about the meeting. He replies that it went well. Anupama gets angry hearing a single word. She reveals to Anuj that nobody is ready to give her a house one rent because she is single. Anupama gets hyper and says that nobody saw her simplicity, her being a mother of three children and her being a good person who never did anything wrong.

Anupama and Anuj recall the former slapping Kavya. Anuj changes the topic to being single. Anuj says he too will come to see a house with her. He cheers up Anupama by joking with her. In the next episode, Baa will not give her blessings to Anupama. In front of everyone, she will refuse to have any relations with Anupama. Kavya will shock Anupama by bringing house papers in front of her.

Reviewed Rating for Anupama 2nd November 2021 Written Update Shocker for Anu: 4/5 This rating is solely based on the opinion of the writer. You may post your own take on the show in the comment section below.