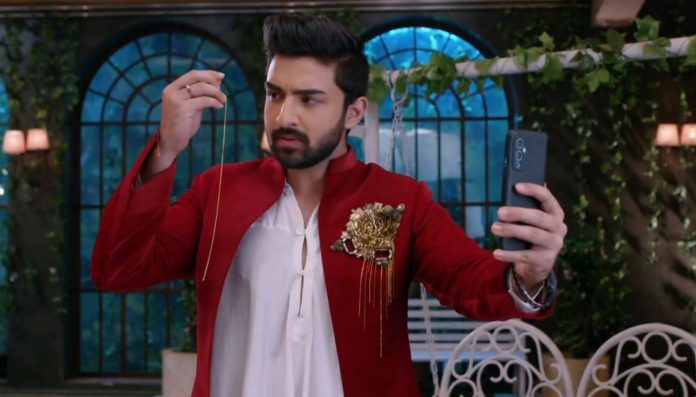 Bhagya Lakshmi 3rd November 2021 Full Written Update Extreme twist Lakshmi tells Malishka that nobody can come between Rishi and her. She adds that a husband and a wife always unites after their fight. Malishka tells Kiran that everything is happening as she planned, Rishi got too frustrated after their fight and vented his anger on Lakshmi. Lakshmi wants to fix Rishi and her relation. Rishi knows that Malishka didn’t mean whatever she told in anger. He calls her. He just wants to talk to her once. He looks for network.

A snake is around Rishi. Rishi tells that he is equally stubborn like Malishka. He doesn’t want his relation with Malishka to end, she is his fate and his love. He can end his relation with anyone for Malishka’s sake. He is shocked to see the snake coming close to bite him. He gets away. Lakshmi reaches there in time. She saves Rishi from the snake. Ayush comes there and finds Lakshmi protecting Rishi from the fatal risk. He runs to Rishi. The snake leaves from there. Ayush sees the miracle himself. Lakshmi offers help to Rishi, but he denies it.

Rishi lectures her. He tells that he could have handled the snake himself, she shouldn’t expect him to thank. He is much upset that she was doubting him. Ayush asks Lakshmi why is Rishi behaving so rude. She doesn’t share the problem. She tells that she will talk to Rishi herself. Rishi asks her to leave him alone. He yells at her. She stays adamant to talk to him. He wants some space. She tells that they shall talk once he comes back. He finds his phone and calls Malishka again. Ayush goes back to the family.

He has a good jolly moment with them. He later tells them about Rishi falling in a dangerous situation. Neelam and Virender are shocked to know this. Ayush tells that Rishi is absolutely fine, Lakshmi had saved Rishi like always. They get a relief on knowing this. Ayush tells that Lakshmi has smartly handled the situation and made the snake leave. He asks Neelam not to panic. Neelam remembers Guru ji’s words. She hugs Lakshmi and is grateful to her for saving Rishi. Lakshmi tells that Rishi is okay. Virender asks her not to leave Rishi alone. Neelam feels indebted that Lakshmi saved her son again. She goes to get a gift for Lakshmi.

Virender also grows emotional and hugs Lakshmi. Rishi calls Kiran and asks her to make him talk to Malishka once. He pleads her. Kiran asks Malishka to talk to Rishi once. Rishi apologizes to Malishka. He begs her to give him a chance. She asks him to end his marriage with Lakshmi. She feels like they have an extra-marital affair, like she is coming between a married couple, like an other woman. He tells that he loves her, he feels like cheating her when he is with Lakshmi. She asks him to solve the problem.

He tells that he is ready to do anything for her. She demands that he ends his ties with Lakshmi. Neelam gifts a necklace to Lakshmi. Lakshmi tells that she doesn’t want more jewellery, but just her blessings. Virender takes Neelam with him. Ayush asks Lakshmi not to think much. Virender asks Neelam not to treat Lakshmi as any helper or outsider, she shouldn’t give a reward to Lakshmi for her efforts and true affection. He asks Neelam to accept Lakshmi as her bahu and love her. Neelam tells that Malishka is her real bahu, Lakshmi is with them temporarily. She asks Virender not to favor Lakshmi by becoming her dad. She knows that he cares for Lakshmi’s emotions. She wants to support Rishi’s love for Malishka.

Virender tells that their heart can feel someone’s feelings, they can see Lakshmi’s love and dedication for Rishi and family. She asks them to see Rishi and Malishka. Malishka asks Rishi if he can break his marriage. He agrees to her. He breaks off the chain gifted by Lakshmi’s family. She gets pleased by his move. Lakshmi feels a bad omen. Her heart senses a bad happening. Will Lakshmi find out the truth? Keep reading.

Reviewed Rating for Bhagya Lakshmi 3rd November 2021 Full Written Update Rishi ends ties: 4/5 This rating is solely based on the opinion of the writer. You may post your own take on the show in the comment section below.