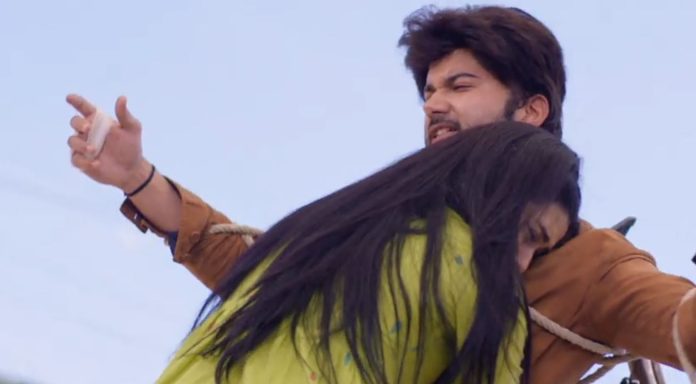 Sasural Simar Ka 2nd November 2021 Written Update Aarav shot Simar tells Vivaan that she isn’t in the Oswal house from now. Vivaan apologizes to her. He didn’t wish to hurt her. Aarav tells that she isn’t his Bhabhi now. Aarav watches her from far. Simar tells Vivaan that they will be always friends. Vivaan replies that he will take care of his health. He adds that he can give his life for Aarav and her. Aarav speaks out and asks Vivaan not to say anything such. Simar avoids Aarav. She leaves from there in a rush. Vivaan asks Aarav how did he let Simar leave from his life. Aarav has no answer. Shobha curses Roma, who has ruined Lalit’s life.

Divya gets the poison bottle outside the room. She checks it and asks Shobha to see what she found. She shows the poison bottle. Lalit worries for Roma. He senses that she has done something wrong. He breaks the door to get inside. Lalit and his family are shocked to see Roma lying nearly dead after consuming the poison. Gagan wants the truth to reach Aarav somehow. He tells that the entire Oswal family is in danger. Aarav stops Simar. She clears that they have no relation between them. He tells her that nothing changed between them, their relation doesn’t need any name. He adds that their feelings can never end. Simar gets rude towards him.

She tells that she doesn’t want to stay under any illusion. He asks her to stop lying. Badimaa finds them together. Simar doesn’t want Badimaa to misunderstand them. Aarav imagines the situation. He is still distant from Simar. Badimaa makes sure that Simar isn’t seen in front of their eyes. Aarav takes a stand for Simar. He believes that Simar is still a part of their family, Vivaan is Simar’s brother-in-law, she will always have a connection with them. Badimaa tells that its not a happy occasion. Simar makes a leave.

Gagan calls Aarav once again and asks him to meet. He meets Aarav and shows the video about Mohit. He tells that he had tried to send the video to him before. Aarav loses his cool knowing Rana and Mohit were planning to kill his family. He goes mad in anger. Simar finds Aarav leaving in rage. She asks Gagan the matter. Gagan shows the same video to Aarav. She realizes that Mohit has harmed Vivaan. She wants to save Aarav. She asks Gagan to tell the entire matter to Gajender. She wants to go to Rana and protect Aarav. She asks him to alert the Oswal family.

Her slipper breaks. She runs barefoot and follows Aarav. Mohit tells Rana that Vivaan is still alive. Rana is thankful that Vivaan didn’t die, else Giriraj would have gone against them. He is afraid of Gitanjali and Aarav. He asks Mohit to go away for some days. Aarav comes there. He beats up Mohit. Rana attacks Aarav to protect his son. Aarav tells that nobody can save Mohit from him. Rana asks his guards to catch Aarav. He asks Mohit to flee before Oswals come. Gagan goes to tell Gajender about Rana and Mohit’s crime. Gajender calls Simar to know about Aarav. She tells that Aarav has gone to Mohit, he may fall in danger.

Badimaa, Chitra and Giriraj see Mohit in the cctv footage. She can’t believe that Mohit had dared to kill Vivaan. Chitra and Giriraj are worried that their name will also surface. Aarav stops Mohit and further beats him. Rana instructs his goons to kill Aarav. Aarav gets badly caught by Rana’s goons. Mohit gets a chance to shoot Aarav. Simar runs to save Aarav. Divya wonders if Roma is really dead. Lalit rushes Roma to the hospital. Shobha feels its Roma’s drama. Mohit tells Aarav that he will shoot him and save his soul from wandering. Aarav doesn’t think Mohit can shoot him. He provokes Mohit to shoot. Simar can’t let Mohit shoot Aarav. She hugs Aarav.

She proves her love for Aarav. Mohit laughs seeing the lovebirds. Simar gets caught by the goon. Aarav loses his cool when Simar falls in danger. Mohit threatens to kill both Aarav and Simar. He angers Aarav by his dirty talks. Simar gives a befitting reply to Mohit. Mohit asks them not to take their death on each other. He gets confused whom to shoot first. He shoots at Aarav. Will Aarav die, or Oswals come on time to save him from Mohit? Keep reading.

Reviewed Rating for Sasural Simar Ka 2nd November 2021 Written Update Aarav shot: 3/5 This rating is solely based on the opinion of the writer. You may post your own take on the show in the comment section below.